Augsburg altar cross with the crucifixion 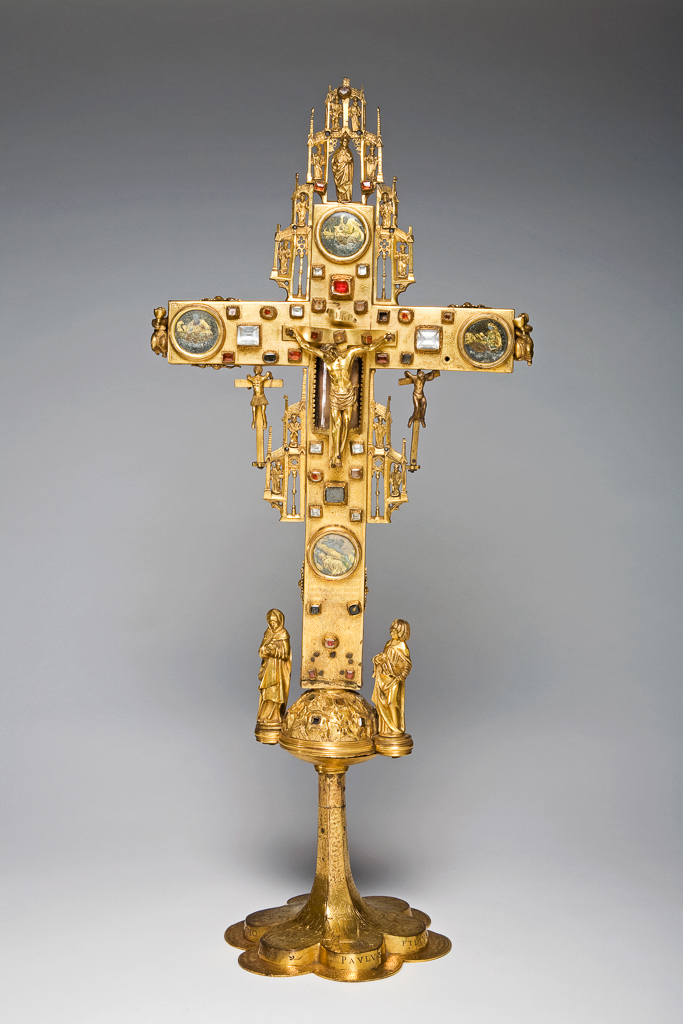 Sculpture. Crucifix/altar cross. Sexfoil engraved with the Resurrection; the angel with the two Maries at the tomb; Noli me tangere; the walk to Emmaeus; the Ascension; and Pentecost. The cross, which contains a reliquary, is set with imitation stones, and enclosed in canopy work among which are the figures of the twelve apostles, and the central figure of the donor, or the saint to which the church was dedicated. There is an angel at either end of the cross-bar, both holding a chalice. There are four circular medallions of enamel on the front of the cross. Top: St. Luke with the bull; right St. Mark with the lion; left: St. John with the eagle; bottom: Adam and Eve expelled from the garden of Eden. (?St. Matthew at the top and missing, as the plaque of the Expulsion should be on the reverse of the cross). Beneath the Expulsion are the words: 'Johanesz hieber diener/meinn. Lasz dir meinn/mütter befollen seinn.' (John, I herewith commend my mother to you.') which refers to the figures of the Virgin Mary and St. John who are standing at the foot of the cross. [The Virgin on the left and St. John on the right]. The three enamel medallions on the back of the cross are; top: Creation of Eve from Adam's side; left: Eve tempting Adam with the apple; right: Adam and Eve hiding from the Lord God in the garden. The fourth medallion is missing, and it may be suggested that the Expulsion should belong here. Engraved at the top of the back of the cross is God the Father and Creator, crowned with a Jewish high-priestly mitre (or the imperial crown?), and holding an orb and a sceptre terminating in a fleur-de-lis. Below, on the cross-bar, is the garden of Eden with many animals (which perhaps represent unfallen nature). Below this again is the scene from Numbers XXI. Here a man lies bitten by a snake, in front of the tents of the camp of the Israelites, while Moses, with two horns upon his head stands by. There is a reliquary compartment behind the figure of Christ, crowned with