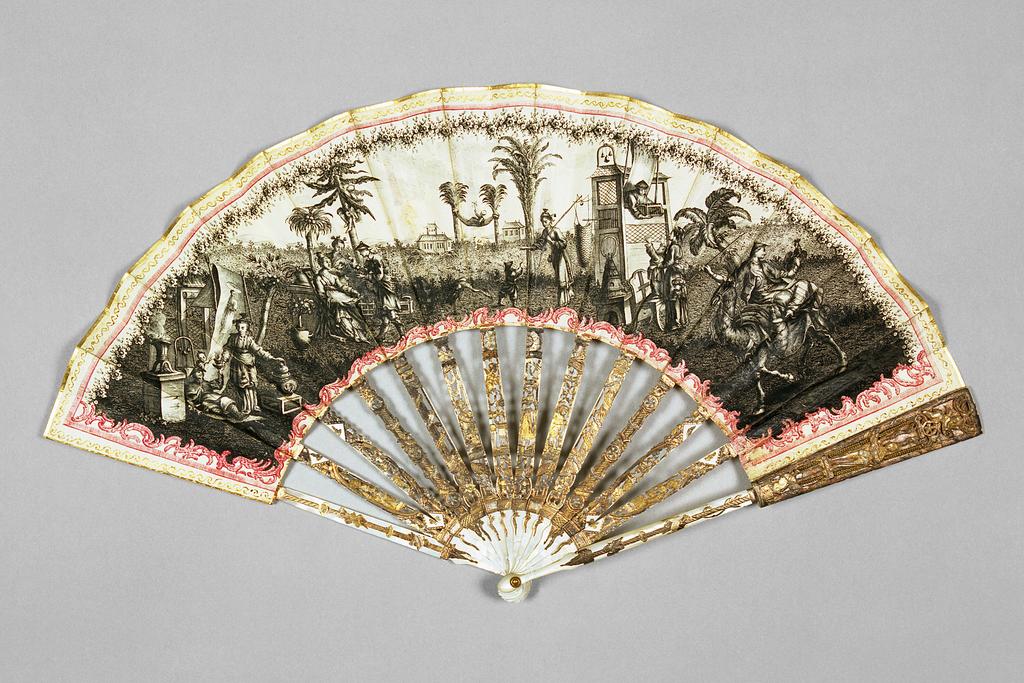 Folding fan. The Pillemont Fan. Unknown maker, France. Front: Decorated overall with groups of chinoiserie figures in black, with a floral border in black at the top. The right, left and lower edges are bordered by scrolls which on the right and left have an outer border of striations which continues across the top. An outer Vitruvian scroll border in gold runs round the top and two sides. Reverse: In the middle, two putti holding a garland are seated on a cloud; scroll border on all sides. Sticks: In the middle a man kneels, offering his heart to a lady, while a putto hovers overhead. On the left and right, an oval cartouche in which a lady stands beside a vase. Guards: On the upper end of each, a gentleman playing a lute with a putto above and a trophy below. Double leaf of chickenskin decorated in pen and black and red ink, and gilt. Gold binding on upper edge. Sticks and guards of pierced, carved, engraved, silvered and gilt in two colours mother-of-pearl . Rivet with two gilt metal washers. Length, guards, 27.6 cm, width, leaf, 50.4 cm, circa 1750 to circa 1760. Rococo; Chinoiserie. Louis XV. Production Note: One of the groups of figures was derived from L'Air in a set of Elements by Jean Pillement (1719-1808). Acquisition Credit: Purchased with a grant from the National Heritage Memorial Fund and a gift from The Friends of the Fitzwilliam Museum.