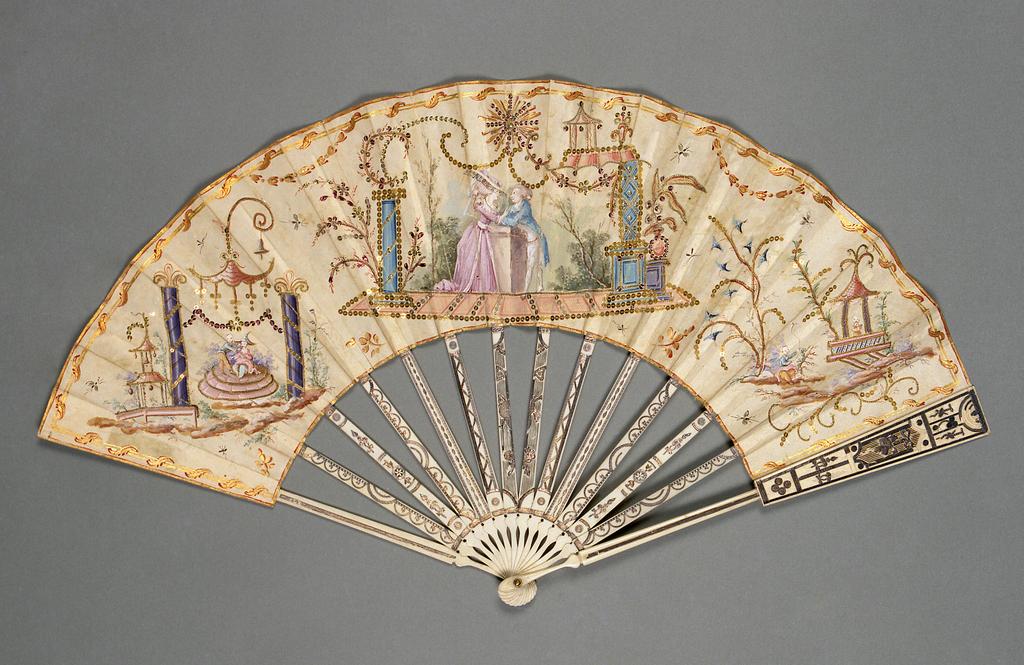 Folding fan, double silk leaf, painted in bodycolour with a European scene and chinoiseries decorated with applied coloured sequins and laid silver-gilt and silver threads. Sticks pierced and cut ivory with silver and gold encrustations. Guards carved ivory with silver encrustations backed with foil (12+2). Rivet and washer of brass; probably replaced in the 19th century. Front: marriage fan with a couple in a garden and chinoiseries; back:undecorated

Folding fan, double silk leaf, painted in bodycolour with a European scene and chinoiseries decorated with applied coloured sequins and laid silver-gilt and silver threads. Sticks pierced and cut ivory with silver and gold encrustations. Guards carved ivory with silver encrustations backed with foil (12+2). Rivet and washer of brass; probably replaced in the 19th century. Front: probably a marriage fan with a couple in contemporary dress in the centre standing in a garden in front of a pedestal. Two differently decorated columns flank them on a ground, which is also decorated with sequins. Above the couple, a star of paint and purple sequins, slightly scrolling chains of sequins and a little Chinese-style pavilion of silver thread; beside the right column, a vase of flowers worked in silver thread. On the left, flanked by two decorated columns a chinoiserie with two very small figures on a tree-stepped round pedestal. Above a hovering Chinese roof and on the left a little building; on the right a chinoiserie with a man sitting on the ground flying a kite and another one standing in a pavilion. Painted plants decorated with gold thread and sequins. A double line wrapped with leaves runs round the left top and right sides and there is a single gold-red line at the bottom. Back: Undecorated. Sticks: From the guards to the middle the sticks are decorated symmetrically. The first three sticks form and oval medallion with a pierced star in the middle, the other sticks have semicircles on a base; the fourth stick has a chain of rhombuses between two lines and the fifth stick has a zigzag line between two straight lines. The two sticks in the centre show a floral sprig, a mandolin and a flute on a background of pierced striations, and a bow and floral spray. The reverse is undecorated. Guards: both guards are decorated in a similar way: a single profiled line on the shoulder. The guard proper is divided into fields: four circles on the bottom, two sprays of flowers, a mandolin, an open book, and a stick with a ribbon on a background of pierced striations, inlaid with foil and decorated with dots in the corners; on top, semicircles above a clover leaf flanked by pipes dangling from bows.

This fan probably celebrated a marriage. The happy couple are surrounded by fanciful Chinese figures and buildings.