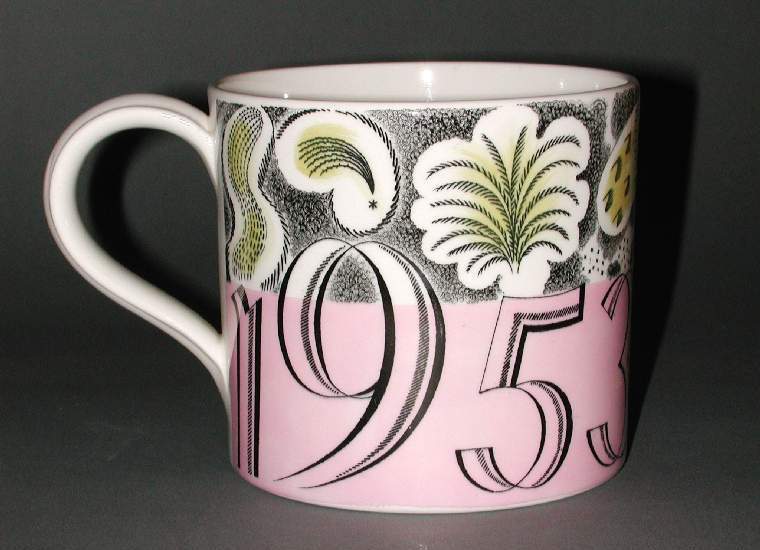 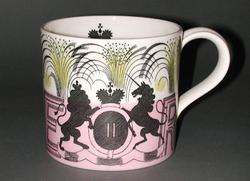 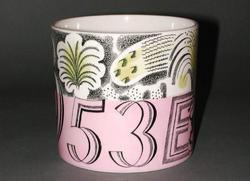 Cream-coloured earthenware transfer-printed in black, and painted in pink and yellow enamels with a design comprising fireworks, '1953' the Royal Arms, and 'EIIR'.

Cream-coloured earthenware, transfer-printed in black, glazed, and painted in pink and yellow enamels. Cylindrical, with a reeded loop handle. On the lower half of the exterior: a design incorporating the date, 1953 the Royal Arms and 'EIIR', over-painted with a solid band of pink. On the upper half: fireworks highlighted in pale yellow, on one side against a darkened sky. Inside, near the rim: 'EIIR' beneath a crown, not coloured. The underside is flat and glazed, with a narrow, raised foot-rim.

Ravilious’ engraving for this mug was produced in 1936, for the Coronation of Edward VIII the following year, but the king abdicated before the event took place. The design was later adapted for the coronations of both George VI and Elizabeth II. Other Wedgwood commemorative ware by Ravilious includes a mug celebrating the company’s relocation to Barlaston in1939 and a ‘Boat Race Day’ bowl, cup and stand (1938). He also designed at least seven Wedgwood tableware services, each with a number of vignettes on a single everyday theme. His ‘Travel’ dinner service for six, produced in the 1950s and depicting travel through snow and by balloon, bus, train, aeroplane, steamboat and sail, cost £17 3s 6d. Earlier designs were engraved at the factory from Ravilious’ drawings; others, including the ‘Boat Race’ images, were lithographs drawn by Ravilious himself for direct application to the ware.

The Fitzwilliam Museum also holds a war-time watercolour by Ravilious, two books with his engravings a number of his prints, a book of Tirzah Ravilious’ engravings, and Wedgwood Coronation mugs designed by Richard Guyatt.

Inscription present: a crown over 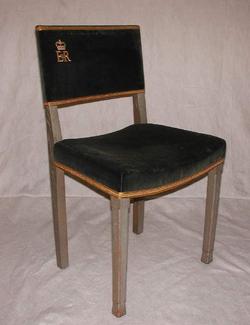 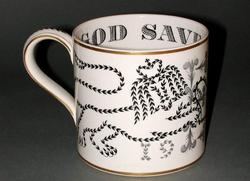 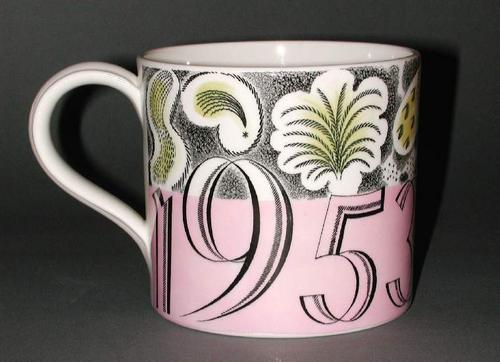