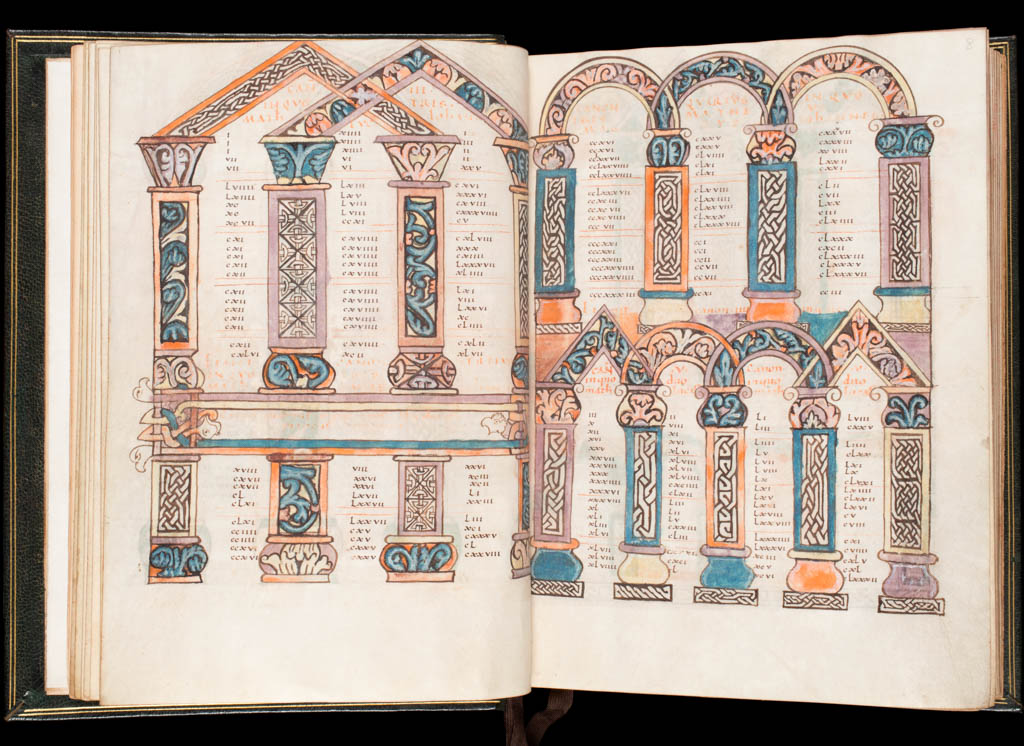 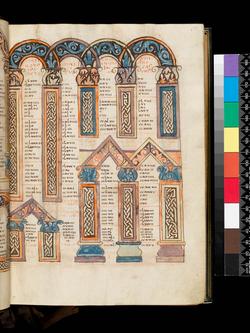 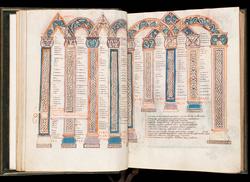 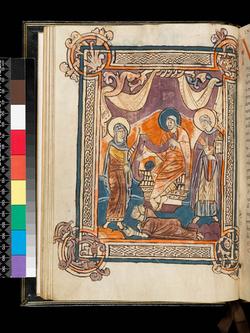 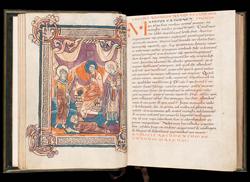 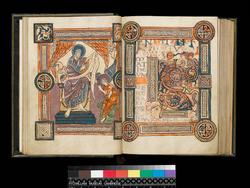 DECORATION
Six full-page framed miniatures, coloured in dull orange, brown, blue and pink, set at the beginning of Gospels: fol. 10v Christ enthroned, flanked by a male and a female saint, with the latter holding a scroll out to Christ and pointing to a monk (the donor) prostrate at her feet and looking up at her, set in a frame with geometric interlace panels with corner medallions containing entwined acanthus ornament; fol. 12v St Matthew enthroned beneath curtains, and writing on a scroll LIBER GENERATIONIS IHV XRI FILII DAVID, with his symbol the angel seated beside him and blessing, set in a frame with interlace panels with squares or round medallions containing interlace or foliage set at the corners or the middle of the sides - the steps of the throne are inscribed HOC MATHEUS AGENS HOMINEM GENERALITUR IMPLET; fol. 41r St Mark enthroned beneath curtains holding pen and scroll inscribed MARCUS VT ALTA FREMIT VOX PER DESERTA LEONIS, partly held by his symbol, the lion beside his feet, set in frame with interlace panels and corner roundels containing large acanthus leaves coming out of beast head mouths; fol. 60r St Luke enthroned, with his symbol the ox beside his feet, holding a scroll inscribed IVRA SACERDOTII LVCAS TENET ORE IUVENCI, set in an interlace-panelled frame with corner medallions containing half-length angels; fol. 90v Central interlace-framed medallion containing the Lamb of God surrounded by four entwined interlace medallions containing evangelist symbols holding the ends of scrolls held by two angels centrally placed at the top and bottom inscribed QVATVOR HI PROCERES SVNT MVNDI SCEPTRA TENENTES (top) and MATHEUS MARCUS LVCAS SANCTUSQVE [IOHANNES] (bottom); fol. 91r St John, with his symbol the eagle flying down above, holding a scroll inscribed MORE VOLANS AQVILAE VERBO PETIT ASTRA JOHANNES, with a stand for two inkhorns supported by lion on left, set within frame containing interlace panels with corner squares and side medallions containing interlace.

Historiated initial: fol. 42v Gospel of St Mark, [I, 31 ll.] Bust of Christ blessing, holding a book, set in a medallion at centre of interlace panel initial, flanked by foliage scrolls with interlace and beast head terminals at top and bottom.

Two full-page drawings added in the twelfth century with listing of relics: fol. 121r Octofoil with niches, perhaps representing a phylactery reliquary, or alternatively intended as an inventory of relics possessed by the place, containing the names of Sts Nicholas, Laurence, Reliquie Regum, Peter, Stephen and Paul, Barnabas, Andrew, Virgin (her shoes), Mary of Egypt, Agatha, Holy Innocents, Benedict, Leodegarius, Bridget, Samson, Virgin (her garment), Laurence, Margaret and Maurontus; fol. 121v Relics from an image of the Virgin, surmounted by niches with relics from the Holy Sepulchre, the Virgin’s tomb, the candle held by the Angel at Christ’s tomb, and at the bottom, from Calvary, St Martin, and other saints not known by name.

ORNAMENTATION
Eleven full-page Canon Tables beneath rounded and gabled arches containing foliage or interlace, the arches in some cases overlapping or interlacing at their bases, supported by columns with capitals and bases, all containing foliate motifs and interlace (fols. 5r-10r). 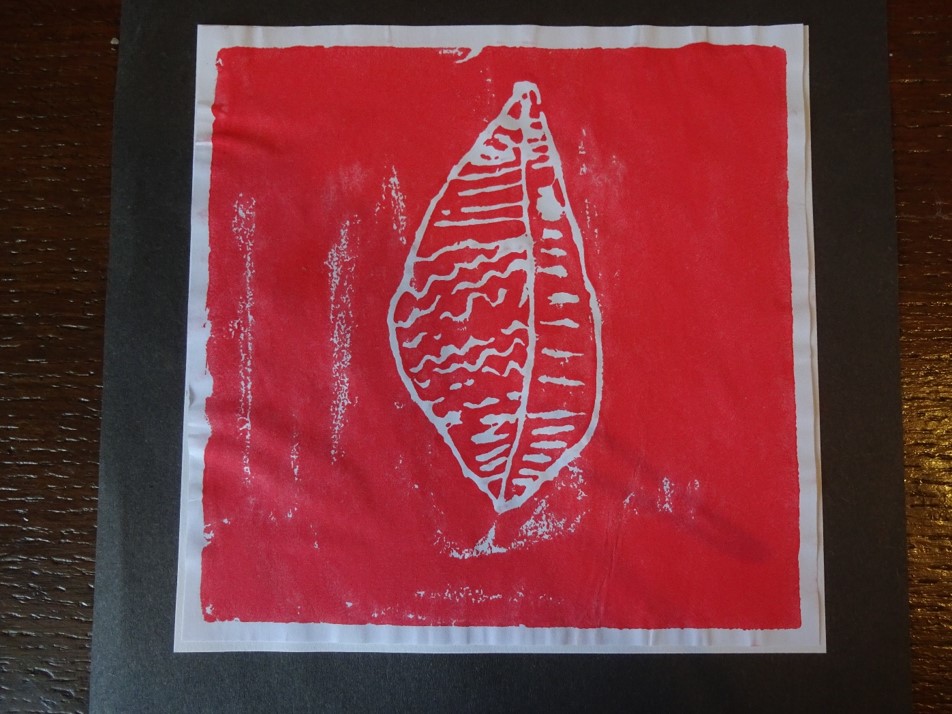 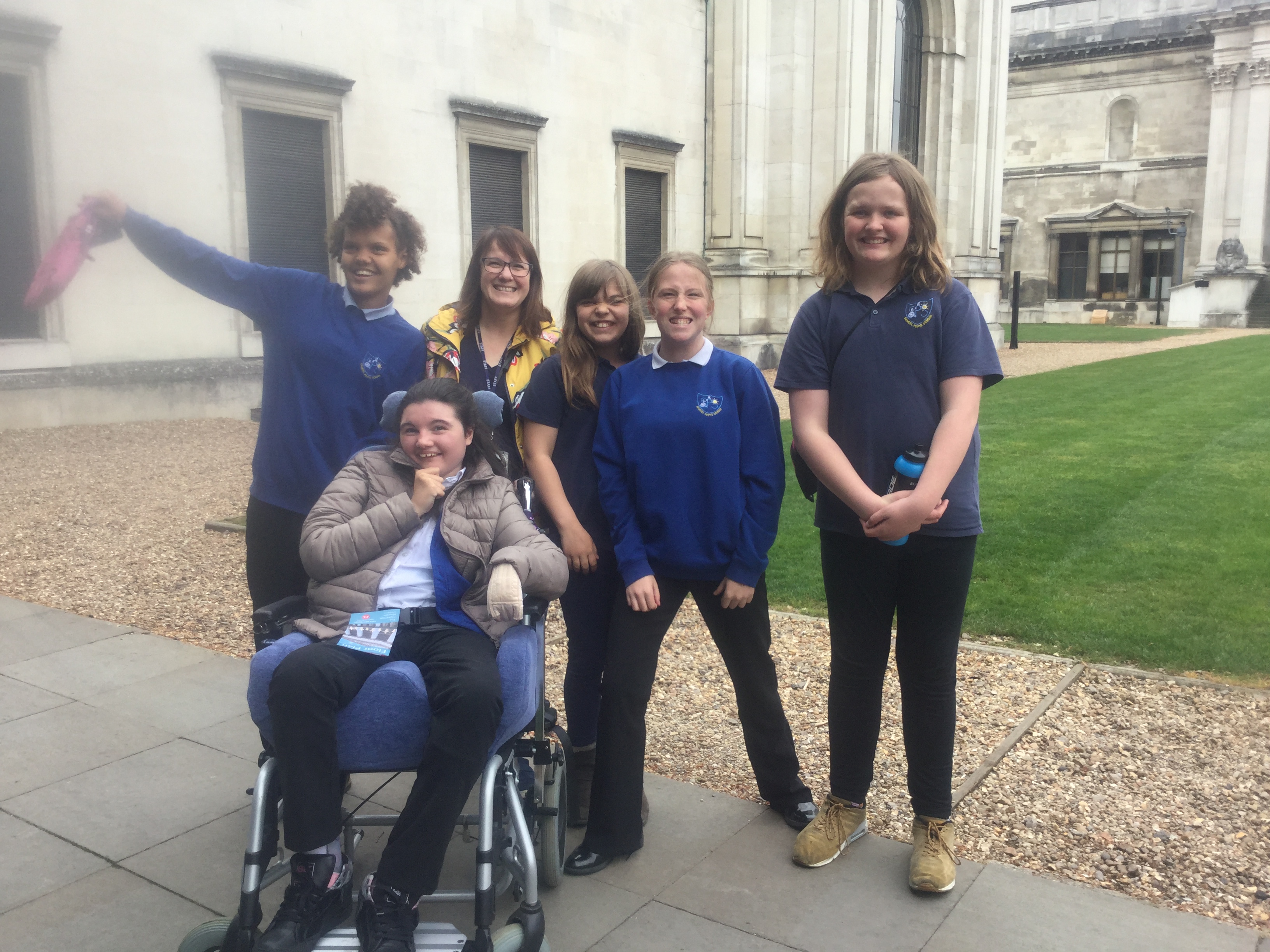