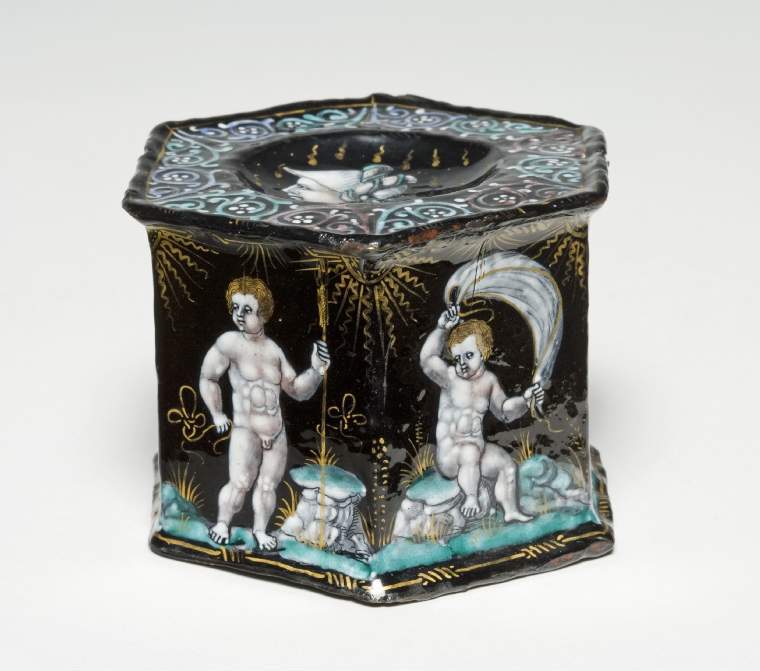 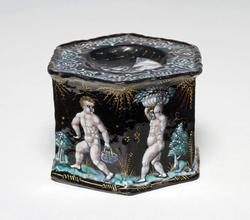 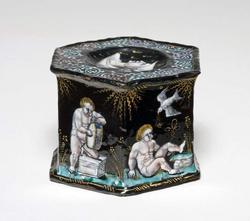 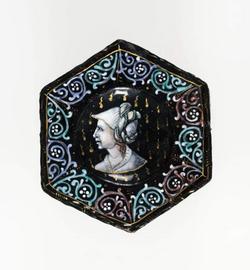 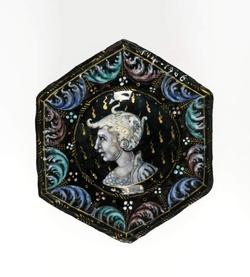 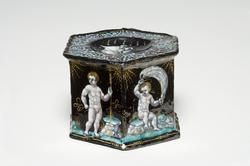 Copper decorated with polychrome enamels and gilding with a female head on the top, a male head on the base, and on one side Cupid holding an arrow, and on each of the other sides a putto

Copper, enamelled in blue, pale bluish-green, flesh-pink, mulberry, and white on a black background, and gilded. Hexagonal with a circular depression in the top and bottom, projecting top and bottom edges, and straight sides.
In the salt pan there is a bust of a woman wearing a cap and elaborate coiffeur in profile to left, against a black background semé with gilt ‘tadpoles’, perhaps shooting stars, and surrounded by a border of three pairs of adorsed turquoise-green and mulberry foliated scrolls terminating in small white flowers, and three pairs of pale blue and turquoise-green. In the depression on the base is a bust of a man wearing armour and a parade helmet in profile to left surrounded by gold ‘tadpoles’ and enclosed by a gold line broken by groups of short oblique strokes. The border comprises small flowers on gold stalks flanked by pairs of feathery leaves: turquoise-green paired with blue; mulbery paired with turquoise-green; and blue paired with mulbery, repeated on the next three facets. The six sides are decorated respectively with Cupid standing beside a rock holding a gold arrow in his right hand, and a gold knot on a string in his left; a putto standing beside a small tree and holding aloft a bowl of fruit , a putto walking to the left holding a basket with a gold knot above his head; a putto sitting on the ground with a gold thread around his left leg and knot above, and overhead, a dove holding a gold necklace in its beak; a putto kneeling on a block of stone and beating a small drum; and a putto seated on a rock holding up a billowing drape. All have gold hair. At the top of each angle there is a half sunburst in gold. At the top and bottom there is a narrow gold line broken by five or six short oblique strokes.

History note: Cyril Humphris Ltd., London, from whom purchased by the Friends of the Fitzwilliam

Method of acquisition: Given (1966-06-16) by The Friends of the Fitzwilliam Museum

Hexagonal salts were fashionable during the mid 16th century and were made in silver, and ceramics, as well as in Limoges painted enamel. Limoges salts of this form bear dates from 1542 to 1547. The salt depression in the top and the matching depression in the base were usually decorated with a male or female head in antique or contemporary costume, sometimes identified in gold capitals as Paris and Helen, Hercules and Deianeira or Omphale, or Pallas and Jupiter. The sides were decorated with several different themes. The most popular, judging by the number of surviving examples, was the Twelve Labours of Hercules divided between two salts. Others included The Follies of Wise Men, The Ages of Love, half-length classical and contemporary male and female figures, or classical and biblical male and female busts, singly or in pairs, sometimes enclosed by wreaths. A few are decorated with nude little boys participating in the grape harvest, dancing, fighting, playing with various objects or on musical instruments.There are pairs ofcomparable hexagonal salts in the Metropolitan Museum of Art, New York ( 32.100.372 and 32.100.373), and the Musée des Beaux-Arts, Limoges (84.432 and 84.433).

Label text from the exhibition ‘Feast and Fast: The Art of Food in Europe, 1500–1800’, on display at The Fitzwilliam Museum from 26 November 2019 until 31 August 2020:This salt’s small size and limited capacity may mean that it was for a lone diner. However, it more likely reflects the fact that salt was consumed in small quantities. Many salts were designed to prompt conversation or cause amusement. The sides of this hexagonal salt are decorated with small boys (putti) in various poses and with diverse objects. It also has two ‘hidden’ portraits: an ideal woman in the hollow on top, revealed only when the salt was finished, and a warrior in the hollow underneath, discovered only if a curious diner happened to turn the salt upside down.

The boy holding up a basket of grapes and the boy sitting on the ground with a bird above him were probably copied from a print of 'Children Harvesting Grapes', dated 1529 by the Monogrammist IB after Raphael (Bartsch, VIII.311.35; Illustrated Bartsch, 16, p. 78, no. 35 (311) . 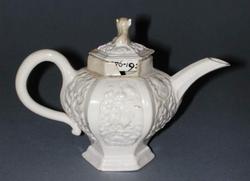 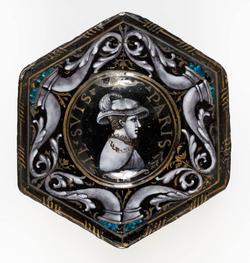 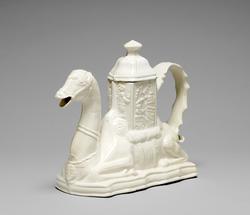 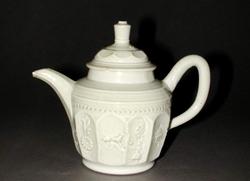