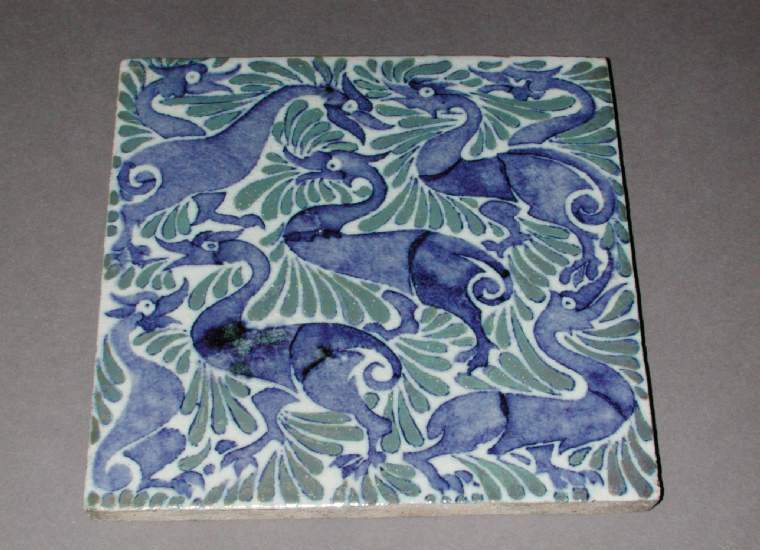 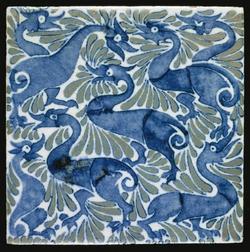 Square, buff-red, earthenware tile, decorated in blue, glazed and finished with silver/copper lustre. The under-glaze design of eight fantasy ducks or dragon-birds surrounded by stylised leaves, which covers the whole upper surface, has been applied by transfer, with the duck shapes filled with thinly applied blue. The leaves are painted over with lustre, which shows silver-gold or pink as the light changes. Some of the ducks face to the left, and some to the right, resisting any sense of unidirectional movement. The blue has run slightly into the slip. The back and the sides are unglazed.

Given by H.C. Mossop

William Frend De Morgan (1839-1917), now widely regarded as the most important ceramicist of the Arts & Crafts movement, also worked in stained glass and became a successful novelist. The son of a non-conformist mathematics professor, he became a close friend of William Morris and Edward Burne-Jones and married the Pre-Raphaelite painter Evelyn Pickering (1855-1919), in 1887. As a ceramicist, De Morgan was primarily a designer/decorator and chemist, working on bought-in blanks or pots thrown to his design. He experimented widely with techniques and glazes, re-discovering methods for making and applying lustres and the colours of Iznik and Persian pottery and using them for a range of complex fantasy designs featuring ships, birds, flora and animals. 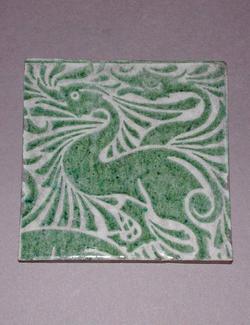 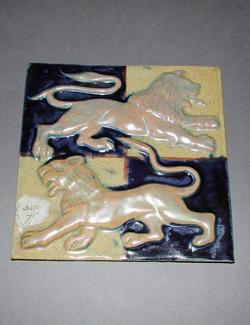