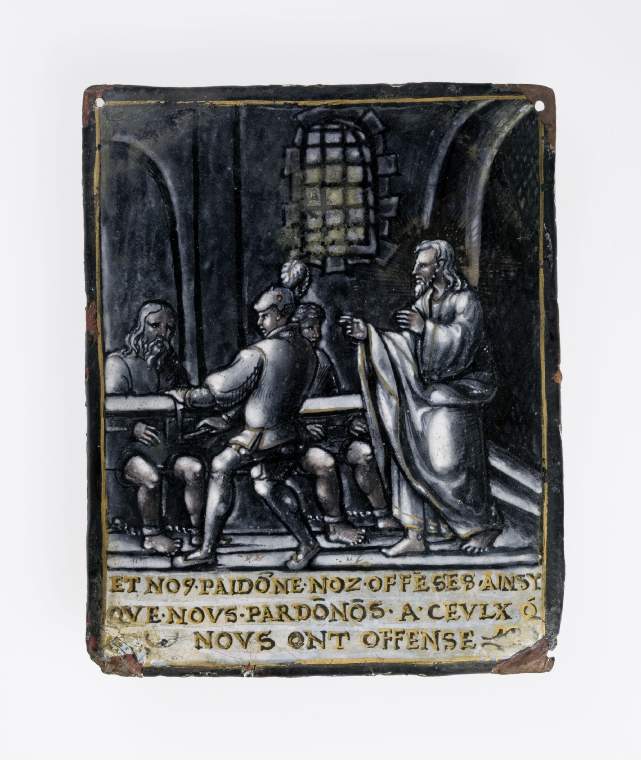 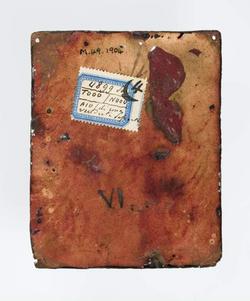 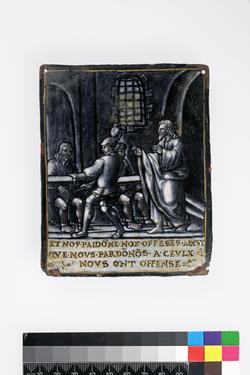 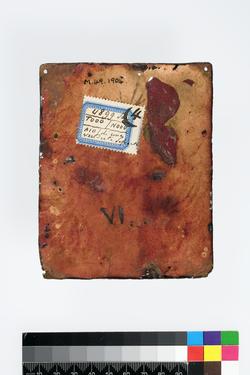 Rectangular copper plaque enamelled en grisailled with a little pink on a black ground, and gilded. Christ visiting the prisoners. Inscribed below T•NO9•PAIDONE•.NOZ• FFESES• AINSY/ E• NOVS• PARDONOS•A. CEVLX•/Q/ NOVS• ONT• OFFENSE’ (And pardon our offences as we pardon them that offend us). One of a set wth M.49A-C, E & F-1904

Rectangular convex copper plaque with a hole in each corner, enamelled en grisaille with a little flesh pink on a black ground, and gilded. Clear counter-enamel unevenly applied with blobs in the top right quarter, and on the lower edge. A large red area of copper in that quarter. Two prisoners are seated side by side in front of a wall in which there is a barred arched window. Thier legs and arms are in stocks Christ enters from a doorway on the right. He has a gold aurole, and is bearded, long-haired, and bare-footed. He wears a long gown with a cloak over it. His arms are held out towards the prisoners. A gaoler with his back to the viewer, is unlocking the prisoner on the left. The gaoler wears a cap with a feather in it, a tunic, trunk hose and shoes. The edges of Christ’s robes and the gaoler’s clothes are outlined in gold. A white panel running across the bottom of the panel, is inscribed in black with gold over it, T•NO9•PAIDONE•.NOZ• FFESES• AINSY/ E• NOVS• PARDONOS•A. CEVLX• Q/NOVS•ONT•OFFENSE’ (And pardon our offences as we pardon them that offend us). A gold line runs round the scene and the inscription. The reverse is inscribed in black with the number ‘VI’. ADD line over Q and N and O in PARDONOS
The plaque is set in an ill-fitting, rectangular, gilt-metal frame with repeating formal leaf border. The plaque is held into the frame by four bent over pins attached to the cardinal points on the reverse.

History note: Uncertain before testator; from an as yet unidentified French sale in which the set was lot 289.

The scenes in this series were inspired by a set of metalcuts by the Basel monogrammist C.V. after Holbein which appeared in Desiderio Erasmus's 'Precatio dominica in septem portiones', published by both Johann Froben and Johannes Bebel successively in Basle in 1524. The work was first published without illustrations in 1523, and was rapidly translated into modern languages. The illustrations in the Froben and Bebel editions have the inscriptions in Latin, but a set of eight prints issued separately a little later with inscriptions in French, signed CV, is in the British Museum (1904.0206, 64,1-8;) and seven of the set (no. 4 is missing) are in the Cabinet des Estampes, Bibliothèque nationale, Paris (EA 25c in fol., p. 57). While the iconography of all the plaques was derived from these prints, the details of the figures and settings differ considerably, in some scenes more than others. See Documentation.

The series was attributed to Colin Nouailher by Alfred Darcel (1867)and his attribution was upheld by J.J. Marquet de Vasselot (1919-20) and Sophie Baratte (2000). This attribution is confirmed by the presence of the initials CN below the title on a plaque from the Lord’s Prayer decorated with the 'Deliver us from Evil' scene, acquired by the Musée de l’Évêché, Limoges, in 2007 (2007.5.2) with another plaque of the 'Give us our daily bread' scene (2007.5.1). Plaques decorated with scenes from the Lord's Prayer were also executed by other Limoges enamellers.

This plaque was originally the sixth of a set of eight representing the Lord's Prayer, of which six are in the Fitzwilliam (M.49A-F-1904). The first plaque shows 'Christ instructing his disciples how to pray', and the others, have scenes associated with the lines of the Lord's Prayer. The words are written below in French. This plaque, the sixth in the sequence, represents the line ‘Forgive us our trespasses as we forgive them that trespass against us’ (Matthew VI, 12). The subject, 'Christ delivering prisoners from captivity' is a reference to the words 'to bring out the prisoners from the prison and them sit in darkness out of the prison house' in Isaiah, 42.6-7. Three more plaques decorated with this subject have been recorded, see Documentation. 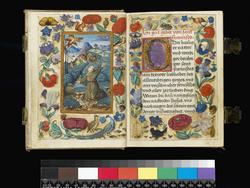 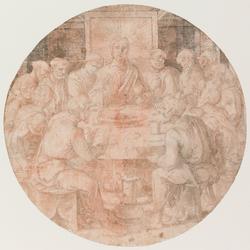 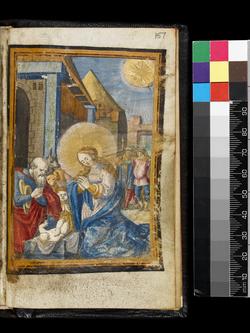 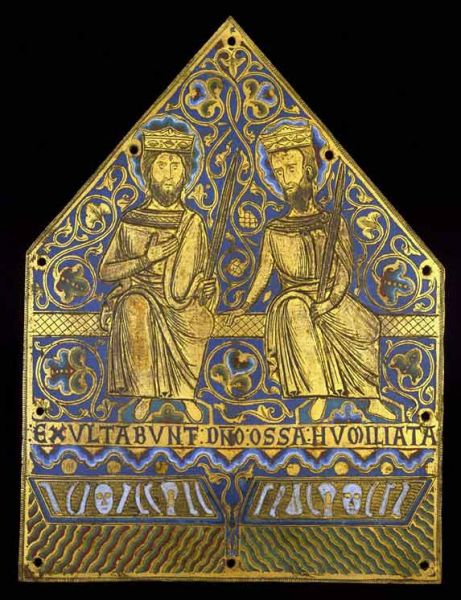 Plaque from a Reliquary