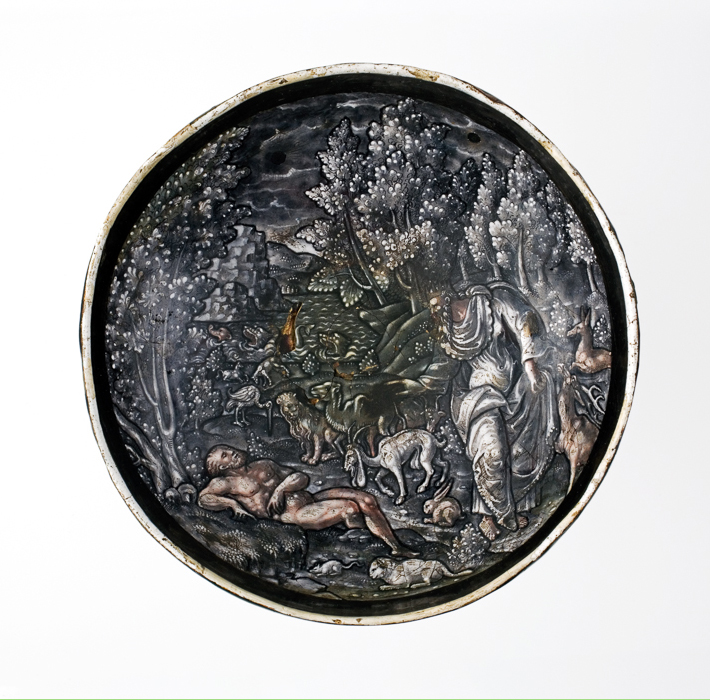 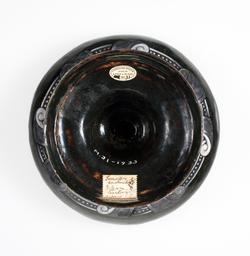 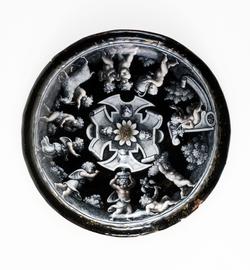 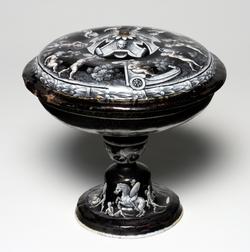 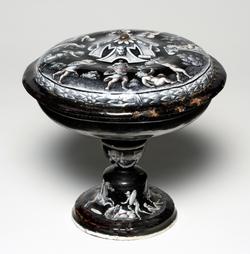 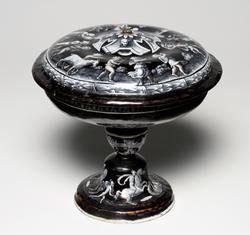 Copper, enamelled en grisaille with pink on a black ground, appearing very dark manganese-brown at the edges. The hemispherical bowl of the cup is supported on a vase-shaped knop on top of a bell-shaped circular foot. The low domed cover has a flange round the edge, and a raised central area with a replacement finial in the form of a horizontal metal grotesque mask. This is held in position on the underside by a lump of red sealing wax. The interior of the cup is decorated with the Creation of Adam, surrounded by a broad black border. God stands on the right. He is bearded and crowned and wears a voluminous long gown. He extends his left hand towards the nude figure of Adam lying on the ground to the left. In the landscape background there are hills and a lake with three sea monsters in it; trees on either side behind the figures; and between them, many animals, including oxen, a pelican, a lion, a camel, a goat, a rabbit, and a cat stalking a mouse, and, on the right of God, a stag and a hind. The underside of the bowl is decorated with a radiating design of four grotesque masks, curling strapwork, swags and beading. The initials '.I.C.' are painted below one mask on the strapwork. Round the rim there is an egg and tongue border. The vase-shaped knop is decorated with three female masks and swags, with a white band above, and on the foot, is a battle scene al antica, with nude warriors on foot and on horseback. The outer edges of the foot and rim are white. The cover is decorated on the exterior with a central flowerhead surrounded by four leonine masks on curling strapwork, around which is a continuous procession of revelling putti wearing vine wreaths in their hair. One is seated in a chariot, the next holds a ewer, two walk together behind another accompanied by a goat, two skip along behind a trumpet player, the next holds a large jar above his head, the next sits holding a vine branch and the last carries a basket of grapes above his head. Around the scene there is a border of bound laurel, and on the flange, remanants of a gilded border no longer legible. The underside is decorated with a radiating design of four winged putto's heads linked by swags over strapwork surrounded by gilt arabesques, and remnants of a gilded guilloche border.

The scene on the interior was derived from Bernard Saloman’s illustration of the Creation of Adam in Claude Paradin, 'Quadrins historique de la bible', Lyon 1553 or later editions of 1555 or 1560, but differs from it in several details. God has a drape around the chest and shoulders with a scalloped or beaded edge absent in the illustration, and has his legs are positioned differently. Adam is shown reclining on a bank rather than prone flat on the ground, and the animals vary considerably.The hare close to God does not occur in Bernard Salomon’s illustration, and suggests that the painter was also influenced by Etienne Delaune’s 'Creation of Adam' which has two on the extreme right, or his Creation of the World, in which two are on the left. Hares do not occur in the Bible story of the Creation, but became common in Medieval manuscript illumination in the Creation and the Naming of the Animals. There are standing cups decorated with this subject in the Green Vaults at Dresden, also initialled .I.C. (see Documentation), and in Musée national de la Renaissance at Ecouen (Ecl 887b.).

Inscription present: rectangular paper label with serrated ends and bottom edge, where there is a red printed line; the date is written sideways to the other words