Joseph's brothers find their money returned to them in their sacks: M.115B-1961 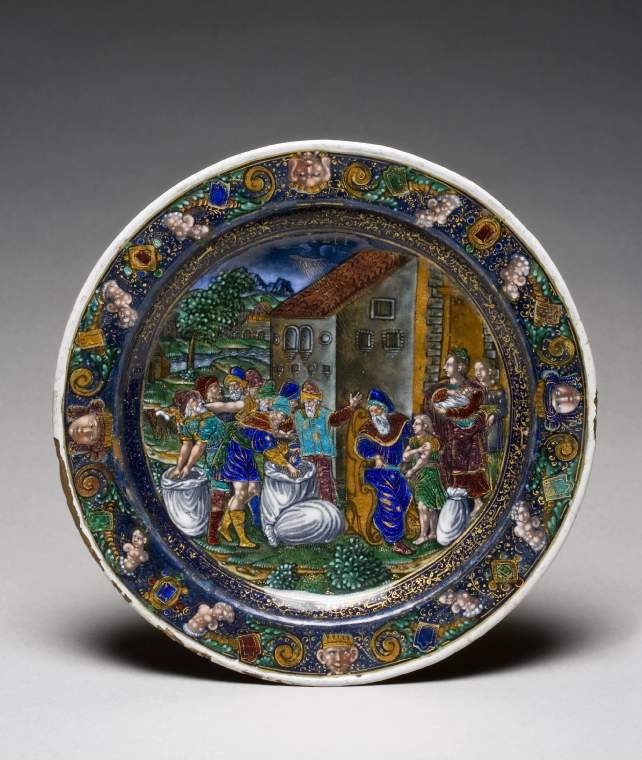 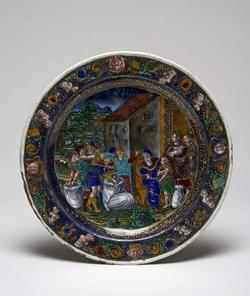 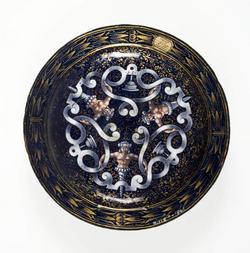 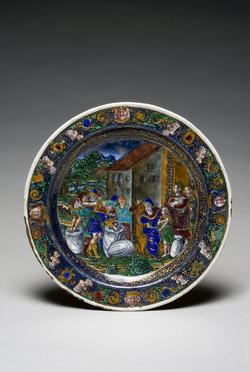 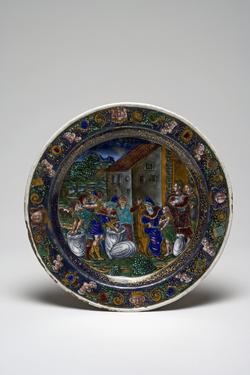 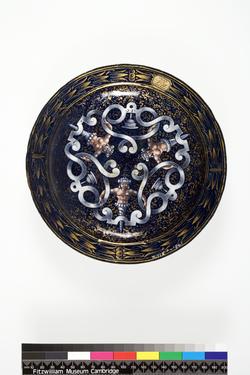 Joseph's brothers find their money returned to them in their sacks

Circular with slightly raised applied edge, narrow sloping rim, shallow curved sides and centre. Round the junction of the rim and well on the back there are a series of holes in the enamel left by supports during firing.The plate has a dark blue ground. The design in the well is enamelled over a white layer in dark blue, translucent blue, turquoise, green, yellow, red, mulberry, and brown with silver foils under the costume, and in black, opaque white, flesh-pink, and opaque white, enhanced with gilding. The sides are decorated in gold over the dark blue ground. The motifs on the rim are executed in translucent enamels over foils and in flesh-pink, white and grey over a white ground, reserved in a dark blue ground with gilt ornament. The reverse is enamelled in grisaille and with flesh pink, and gilding.
The well is decorated with Joseph's brother's showing Jacob that their money has been returned to them in their sacks of grain.The action takes place out of doors, with two buildings in the background to right, a landscape with a stream on the left, and a path and two bushes in the foreground. A woman holding a baby in her arms and another woman stand on the right with a small sack in front of them. Benjamin stands beside his father, Jacob, who is seated in a chair. To the left, there is a sack lying sideways on the ground, and two more upright, which are being searched by two of the brothers. Six more of them stand behind them, one raising his arms in a gesture of surprise. In the sky above, in gold, is ".G.XLII" with below it, gold rays streaming down towards Benjamin.The sides are decorated with gold foliated scrolls on a dark blue ground, and on the rim, two different male and two different female masks, separated by tritons with tablets over their scrolling tails flanking jewels, with gold foliated sprays on a black ground. The edge is white.
The reverse is painted in grisaille and flesh pink with two female terms and one male [?] term and three torches without flames linked by strapwork. The dark blue ground is decorated with gold sprays and foliate scrolls. On the rim there is a wreath of gold leaves and berries between pairs of gold bands. On the back, "I.C" in black on white strapwork below one of the torches.

The Biblical story of Joseph told in Genesis, was a common theme for the decoration of domestic objects in France in the second half of the 16th century. Limoges enamellers decorated caskets, ewers, dishes, and small plates with Joseph scenes. Although no complete sets are known, this plate was probably one of a set of twelve each decorated with a different event in the story, beginning when Joseph was already the slave of Potifar in Egypt, and extending from his rejection of the enticements of Potiphar’s wife (Genesis 39.7) to his reconciliation with his brothers (Genesis 45.14-16). Ten of the scenes were closely based on Bernard Salomon's woodcut illustrations to Claude Paradin’s 'Quadrins historiques de la Bible', first published by Jean de Tournes in Lyon in 1553. An augmented edition appeared in 1555, reprinted in 1558 and 1560, and another augmented edition in 1583. Each page had the biblical reference at the top, a woodcut, and an explanatory verse below. Another work of the same type, Guillaume Guéroult’s 'Figures de la Bible illustrées de huictains francoys . . . (Guillaume Roville), Lyons, 1564 (2nd edn, 1565), with illustrations by Pierre Vase/Eskrich was used for the 7th and 10th plates in the series, and the 12th has aspects from the woodcuts in both publications. These books can be seen online in the website Gallica of the Bibliothèque nationale

The initials ‘'I•C.’ occur on a great many enamels made during the second half of the 16th and early 17th century. The plate therefore seems likely to have been a workshop mark used succesively by members of the Court family. These were Jehan/Jean Court dit Vigier I (d. 1592) and his son, Jean Court dit Vigier II (b. c.1575-d. between 1631-5); another Jehan/Jean de Court who witnessed the latter's wedding in 1598, and was therefore probably a relative, and another enameller, Jehan/Jean Court dit Vigier le jeune who married in 1613, and died between 1627-31. (See Documentation, Beyssi-Cassan, 2006). None of the Joseph plates are dated but their similarity to a set decorated with the Life of the Virgin, bearing the arms of de Vic, probably for Méry de Vic (d. 1621), who was intendant in Limoges during 1588-89 suggests that they could have been made around that time or during the 1590s. It therefore seems more likely that these plates were decorated by the younger Jean Court II.

The plate has a blue ground, like those in a part set of six plates in the Louvre, which were acquired in 1794 having been seized for the state in 1793 from the collection of Louis-Hercule-Timoléon, duc de Brissac (1734-1792) then in the hôtel Talleyrand-Péricord. The plates in that group however, are a little larger than this plate, 20.2 cm in diameter, and have different border designs on the rim, so although this subject is missing from that set (if it originally had twelve plates), the plate seems unlikely to have been part of it.

This subject, the ninth in the sequence, was taken from the Book of Genesis 42 Joseph’s brothers returned home to their father Jacob, having left Simeon behind in Egypt as a hostage. When they unpacked their sacks of grain, they discover that their money has been returned to them in their sacks. The scene was after the woodcut titled GENESE XLII’ by Bernard Salomon in Claude Paradin’s, Quadrins Historique de la Bible, Lyon (Jean de Tournes), 1553 or a later edition. The plate was misidentified in the catalogue of the 1865 Musée retorspectif as Joseph selling corn to his brothers, and later as the Betrayal of Benjamin, and as the Finding of the Cup in Benjamin's Sack, which occur later in the story.Another plate decorated with this subject formerly belonged to Baron Ferdinand Anselm de Rothschild (1839-98), and is part of the Waddesdon Bequest in the British Museum (WB34) (see Documentation)

Raising (metal forming process) : The well has a partly foiled and partly white ground, decorated with dark blue, translucent blue, turquoise, green, yellow, red, and mulberry, flesh-pink, brown, grey, opaque white, and black enamels, and gold. The sides are decorated in gold on a dark blue ground. The motifs on the rim are executed in translucent enamels over foils and in flesh-pink, white and grey over a white ground, reserved in a dark blue ground with gilt ornament. The reverse has a dark blue ground, painted in grisaille and with flesh pink, and gold. Round the junction of the rim and well on the back there are a series of holes in the enamel. 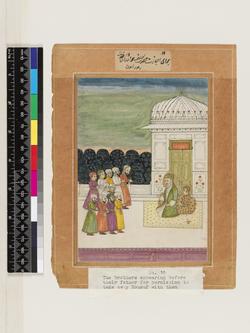 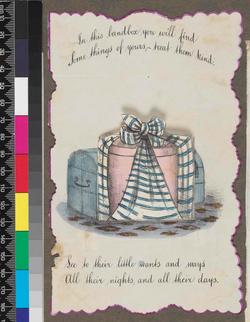 The Story of Joseph, II 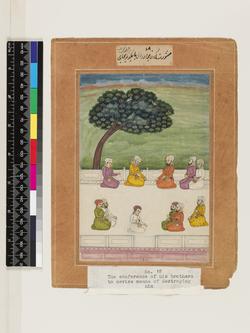 The conference of his brothers to devise means of destroying 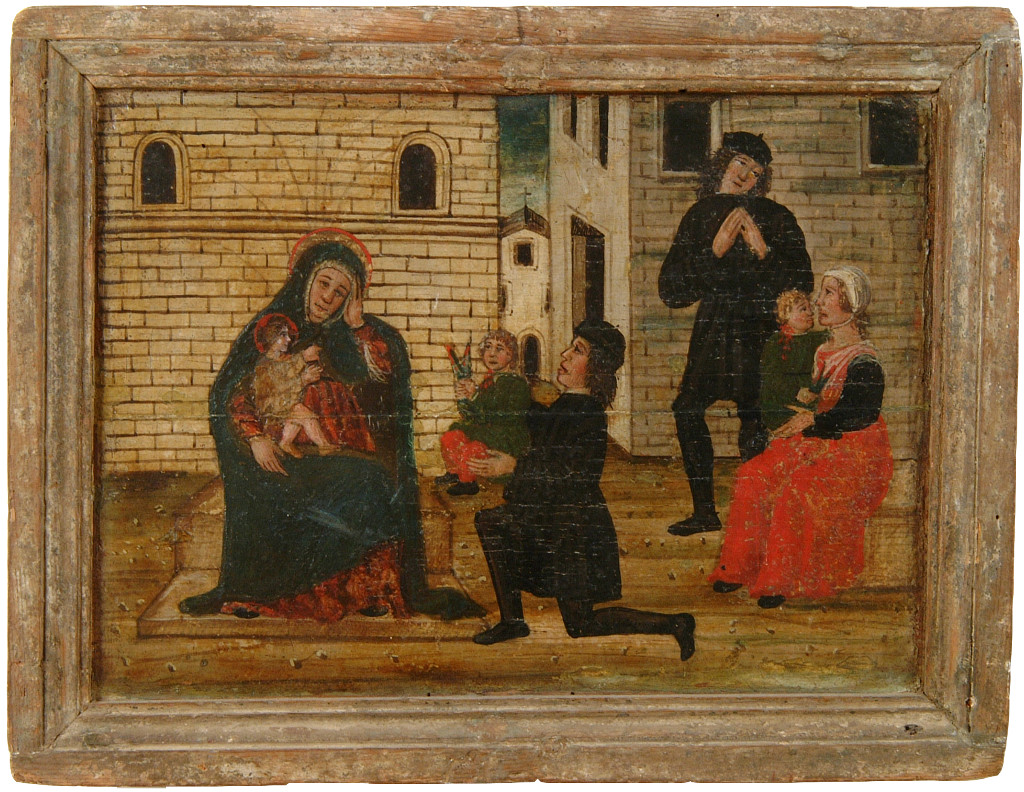 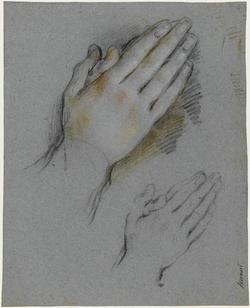 Studies of hands clasped in prayer 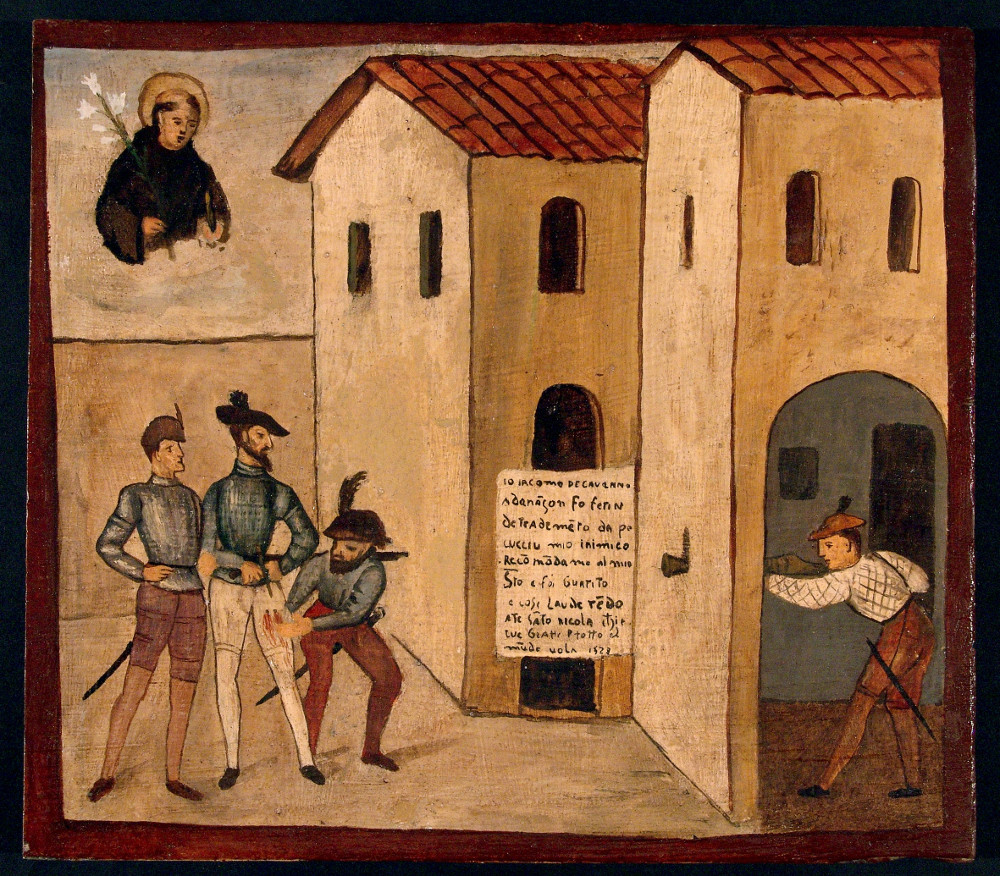