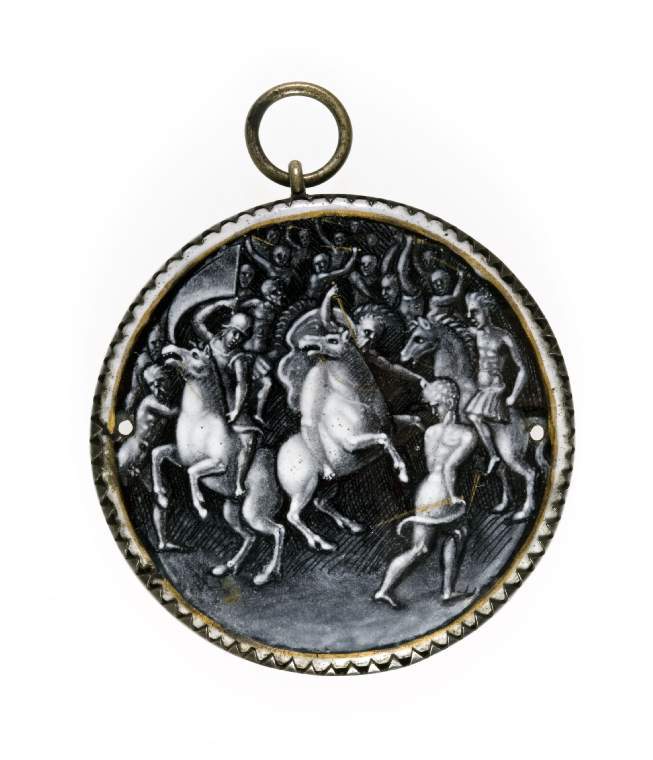 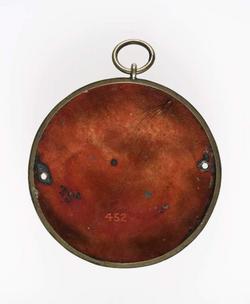 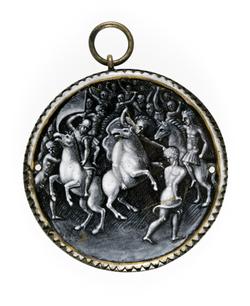 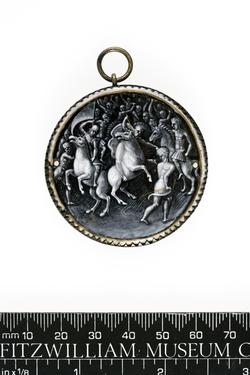 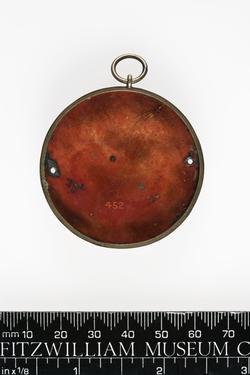 Circular, and slightly convex copper plaque, with a small circular hole at 3 and at 9 o’clock. Copper enamelled in grisaille on a black ground, and gilded. The black enamel appears brownish-red near the edges. The chiaroscuro was produced by the enlevage technique with hatching and cross-hatching in the background and on the horses. The reverse has translucent counter-enamel which appears pinkish-red from the oxydization of the copper beneath it. The enamel has blackened and shrunk away from the two holes. There are several brownish-black speckles in the counter-enamel elsewhere.
The front is decorated with a battle scene. In the foreground there are two rearing horses mounted by warriors wearing Roman armour and helmets. One, on the left, carries a banner, the other, in the middle, is about to slay a nude man standing with his back to the viewer in the right foreground. Behind him is another horseman, clad only in a pleated skirt. Behind them there are fifteen men, wholly or partly visible, some of whom brandish swords. The swords and the horses’ bridles are gold. The edge is white and is encircled by a narrow gold band.
The circular metal alloy mount has a toothed inner edge, and at the top has a circular ring and a loose suspension ring.

Formerly attributed to Master KIP but the painter’s style, is closer to that of a plaque of Samson killing a Phillistine in the Walters Art Gallery, Baltimore (inv. no. 44.37)attributed by Verdier to Jean III Pénicaud or to an anonymous master ‘formed in the workshop of the Pénicaud’. A particularly notable point of similarity is the four-toed foot of the central warrior which resembles the foot of a mounted figure in the Walters’ plaque. The treatment of the rearing horses is also comparable.

The iconography is reminiscent of a slightly larger medallion in the Louvre attributed by Marquet de Vasselot, and Baratte, to Master MP, and initialled MP. Possibly the scene was derived from a Renaissance medal 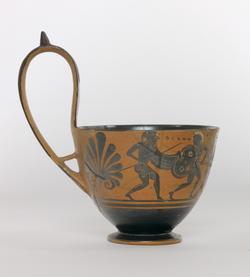 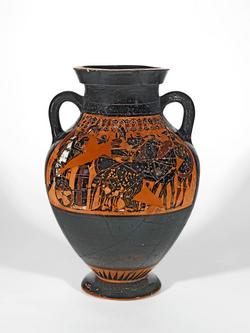 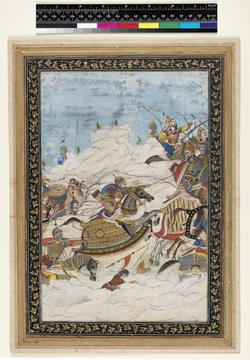 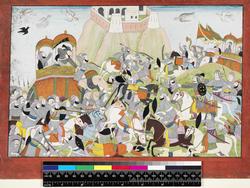 A battle scene, with a fortified palace in the background