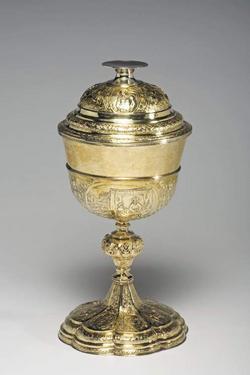 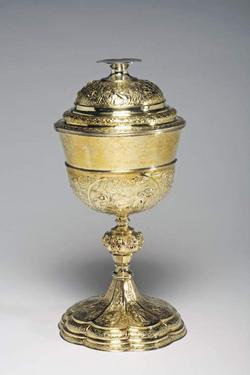 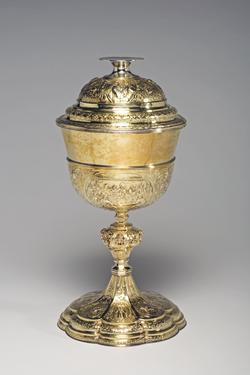 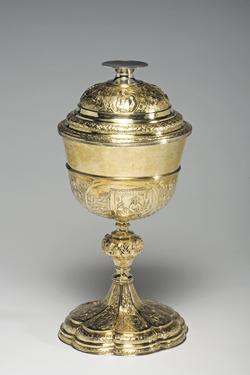 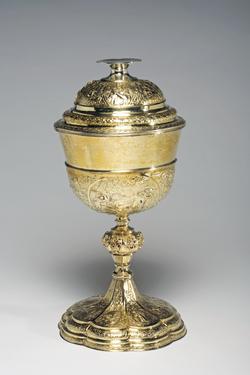 Silver-gilt; the large bowl has a slightly everted rim and sits within a shallow cup, which is embossed with three oval cartouches containing vignettes of Christ at Emmaus, the Last Supper and Manna arriving from Heaven. Between the three cartouches are formal arrangements of cherubs' heads, fruit and scrolling foliage on a striated ground. The octagonal stem has a large central knop applied with a border of alternating cherubs' heads and lilies in urns. The stepped spreading octafoil foot is embossed with eight oval cartouches containing Christian symbols, including the Agnus Dei, the pelican in her piety, the Good Shepherd, the lion of Judah and a lily for purity, a beehive, a wheatsheaf and a coat-of-arms with the initial 'W' above and 'E' and 'F' on either side. These are surrounded by formal borders containing cherubs' heads, fruit and scrolls on a striated ground. The stepped and domed cover is similarly decorated and is embossed with four oval cartouches depicting the Passions of Christ. The spool-shaped knop cum foot is undecorated and has a slightly concave upper surface.

Label text from the exhibition ‘Feast and Fast: The Art of Food in Europe, 1500–1800’, on display at The Fitzwilliam Museum from 26 November 2019 until 31 August 2020: Ciborium with The Fall of Manna, Last Supper, and Supper at Emmaus, and cover with vignettes of The Passion of Christ. The Passion of Christ The ciborium is used during Holy Communion to hold the bread, normally in the form of unleavened wafers (recalling the Passover Matzah) called ‘hosts’ from the Latin 2019-12-04- ‘hostia’ meaning sacrificial victim. The bowl of this beautiful example is decorated with three key revelatory ‘bread’ episodes from the Bible: the Fall of Manna (when God fed the Israelites with bread from Heaven), the Last Supper (when Christ broke bread with his disciples, foretelling his death and instituting the Eucharist), and the Supper at Emmaus (when the Risen Christ revealed himself to two followers in the breaking of bread).

The four vignettes of the Passions of Christ, on the cover, are after plaquettes by an artist in the workshop of Matthias Wallbaum (1554-1632)

The maker's mark, possibly of AK cojoined, has not been identified, nor has another indistinct mark, which may be for the town 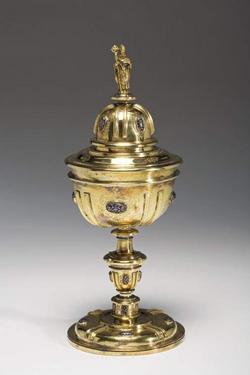 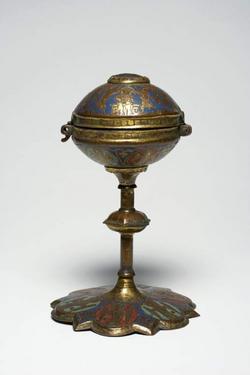 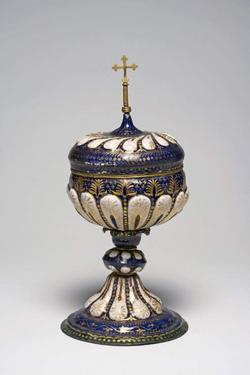 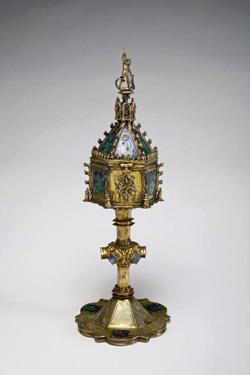