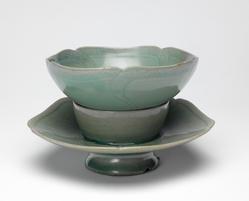 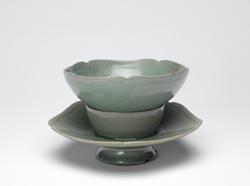 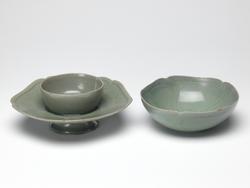 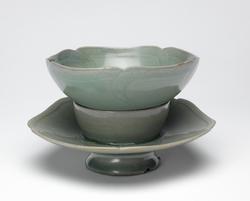 Bowl and stand with flowers. Stoneware, thrown, shaped, luted, incised and celadon-glazed. The wide bowl is of five-petalled flower shape with a low footring. The stand has a tray of matching five-petalled shape, a plain support for the bowl and a spreading foot and is open in the centre. Both bowl and stand are carved with overlapping petals and the bowl has a raised centre to represent the stamens. The petals of the bowl are outlined both inside and out with incised borders of foliage scrolls (tangch'o) and on the inside each petal is further incised with a single flower spray. The glaze is of clear pale bluish-green jade colour, evenly applied and with a subtle gloss, the glaze of the stand being slightly darker than that of the bowl, and both pieces have a fine crackle. The bowl has three quartzite spur-marks on the base, the stand shows traces of six fire-clay spurs on the footring.

Despite their similarity in shape these two pieces probably originally did not belong together, judging by the differences in glaze colour, decoration and firing method. Bowls and stands of flower shape can be found in Chinese Ru ware of the Song dynasty, and the relationship between Korean pieces and their Chinese counterparts still needs further study. Pieces like these were made in the mature period of Koryo celadon, in the first half of the twelfth century, both in kiln no.7 at Sadang-ri, Kangjin-gun, South Cholla province, and in kiln no.12 at Yuch'on-ri, Puan-gun, North Cholla province.