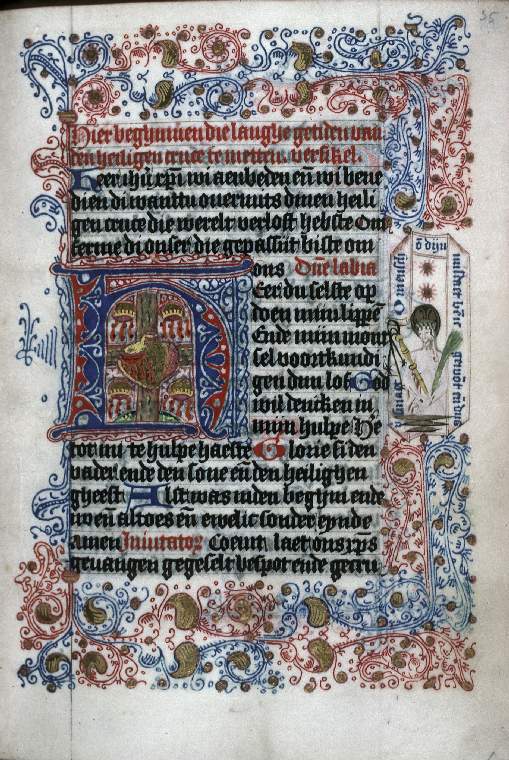 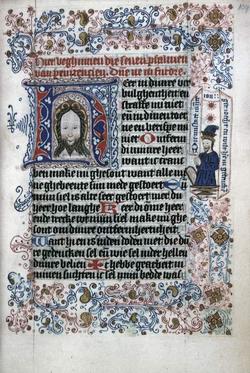 DECORATION: Blue and red parted initials with pen-flourished infill, occasionally incorporating motif inspired by text, and full pen-flourished borders with gold leaves and flowers including figures with scrolls inscribed in Middle Dutch or Latin, for major text divisions: fol. 15r Hours of the Eternal Wisdom, Christ blessing and holding orb in border; fol. 35r Hours of the Cross, [H, 8 ll.] Cross and five bleeding wounds, in border Man of Sorrows holding scourge and reed; fol. 55r Hours of the Holy Spirit, blue dove in border; f. 77r Hours of the Virgin, Matins, angel praying in border; fol. 109r Penitential Psalms, [H, 8 ll.] Holy Face, in border David praying with harp beside him; fol. 126v Prayer on the Sacrament, in border monstrance with host; fol. 131r Meditations on the Passion, Pelican in her piety in border; fol. 159r Office of the Dead, in border Hell Mouth with souls praying in flames; fol. 196r Hours of All Saints, Agnus Dei with banner in border.