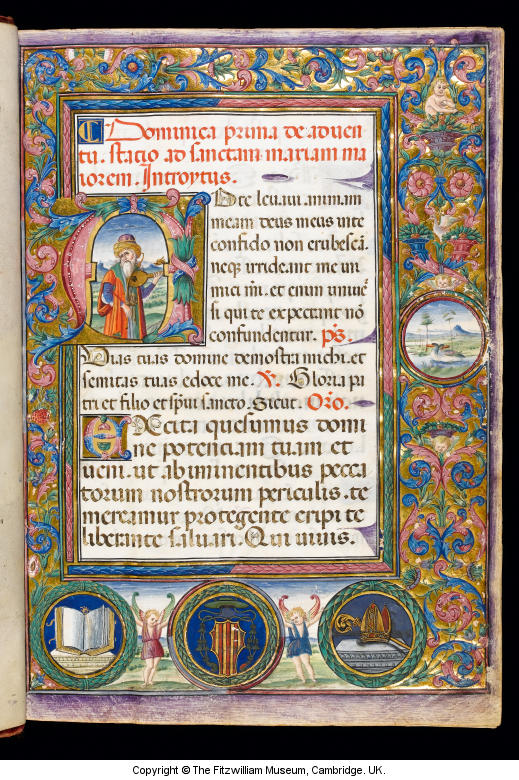 This richly decorated missal, containing texts for the liturgy of the Christian Mass, was produced for Alessandro Carrafa, the Archbishop of Naples (1484 -1503) in 1488. While the names of the artists or workshops who produced these stunning borders and historiated initials are unknown to us, it is clear from the accomplished execution, expensive pigments, and gold that this was a prestige commission.

We know that this book was owned by several high-ranking officials in the church because of the inclusion of their coats of arms. Carrafa’s coat of arms was painted on to several pages, however, when the book passed into the hands of Antonio Scarampa, Bishop of Nola (1546-1569,) the new owner had his own heraldry painted over Carrafa’s arms. The binding also contains the embroidered coat of arms of another owner, Cardinal Alessandro Crivelli (1514–1574).

BINDING: Seventeenth century, red velvet over wooden boards, sewn on three supports, embroidered with the arms of Cardinal Alessandro Crivelli (created Cardinal 1565, d. 1574), quarterly (1 and 4) per fess or an eagle displayed sable and quarterly gules and argent a sieve argent, (2 and 3) azure a demi unicorn holding an ostrich feather with a scroll inscribed [A SEM]ITI[S IMPIORUM ELONGOR], over all an escutcheon of five billets gules; fore-edge painted with the Scarampa arms, or five pallets gules, amidst foliage.

DECORATION: Full-page miniature within a wide frame containing pink, blue and green acanthus, foliage, flowers, a herm, two vases with fruit, and a plaque inscribed ANTONIUS SCARAMPA EPISCOPUS NOLAE, and in the bottom border, within a green wreath beneath a grey-green episcopal hat with tassels, the arms of Scarampa overpainting those of Caraffa, all set on a gold ground: fol. 163v Canon of the Mass, Crucifixion with the Virgin and St John in a receding landscape containing a city, a valley and mountains.

Twenty-one historiated initials in blue or dark pink with delicate white floral designs on gold grounds, accompanied by full or partial bar borders with foliage extensions of acanthus leaves, flowers, and gold leaves and balls: fol. 5r Introit for the First Sunday of Advent, [A, 7 ll.] Three-quarter length figure of David in a landscape playing a viol, with the text framed by a wide border set against purple parchment and containing blue, pink and green acanthus leaves, flowers, cornucopeia, three putti, a bird, all on a gold ground, a medallion at the side with two ducks swimming on a stream, and in the lower border three medallions surrounded by green wreaths and supported by putti, the left one containing an open book, the central one a grey-green bishop's hat surmounting the arms of Scarampa overpainting those of Carrafa, and the right one a bishop's mitre and crosier lying on a stone slab; fol. 19r Introit for Christmas Day, [P, 7 ll.] Adoration of the Child, with landscape background; fol. 25v Introit for St John the Evangelist, [I, 5 ll.] Three-quarter length figure of St John the Baptist (instead of St John the Evangelist); fol. 27v Introit for the Octave of Christmas, [P, 4 ll.] Adoration of the Child; fol. 30r Introit for the Epiphany, [E, 5 ll.] Adoration of the Magi; fol. 164r Canon Prayer of the mass Te igitur, [T, 5 ll.] Priest accompanied by a kneeling acolyte elevating the Host at an altar with an altarpiece of the Crucifixion; fol. 175v Introit for Easter Sunday, [R, 6 ll.] Christ stepping out of the tomb; fol. 184r Introit for Ascension Day, [V, 6 ll.] Ascension; fol. 187r Introit for Pentecost, [S, 6 ll.] Descent of the Holy Spirit on the Apostles; fol. 195r Introit for Trinity Sunday, [B, 5 ll.] Throne of Grace Trinity; fol. 197r Introit for Corpus Christi, [C, 5 ll.] Chalice on an altar with a Host above it; fol. 200v Introit for St Januarius, [G, 5 ll.] St Januarius standing and holding a palm; fol. 205v Visitation, [G, 5 ll.] Visitation; fol. 208r Introit for St Peter's Chains, [N, 5 ll.] St Peter standing; fol. 210v Introit for the Assumption, [G, 5 ll.] Virgin Mary standing among clouds; fol. 213r Introit for the Nativity of the Virgin, [S, 5 ll.] Nativity of the Virgin; fol. 219v Introit for the Purification of the Virgin, [S, 5 ll.] Presentation in the Temple; fol. 222v Introit for the Annunciation, [V, 5 ll.] Annunciation; fol. 225r Introit for All Saints, [G, 5 ll.] Saints Peter and Paul with a group of male saints; fol. 228r Introit for the Mass of the Dead, [R, 5 ll.] Skull on a Roman pedestal; fol. 246r Introit for the Votive Mass of the Holy Cross, [N, 5 ll.] Large jewelled cross set in a landscape. 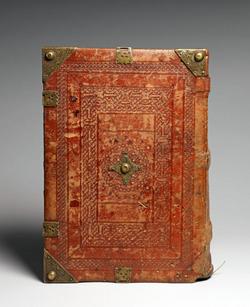 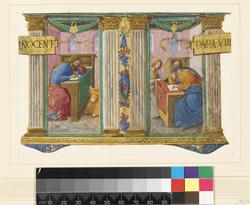 Two border fragments from the Missal of Innocent VIII 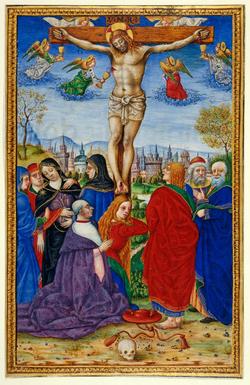 Miniature from the Missal of Cardinal Antoniotto Pallavicini 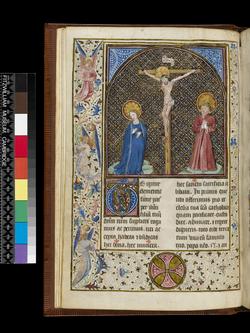