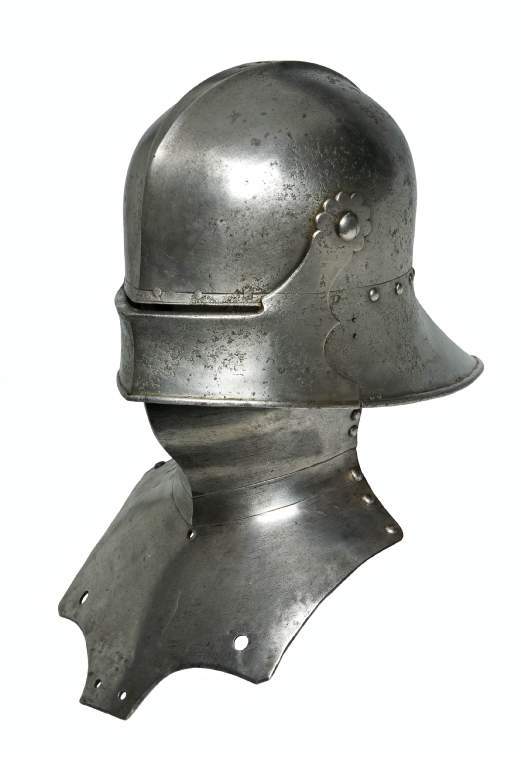 Bevor, for wear with a sallet in a type of joust known in Germany as the Scharfrennen, which was fought with pointed lances in an open field. Formed in one-piece with a high medially-ridged upper half shaped to the chin and neck, and a deep lower half extending down the chest. The upper edge, which rises to its centre, has a plain, angular, outward turn. The lower edge, which has a truncated cusp at its centre is bevelled. The cusp is pierced with a pair of rivet-holes for the attachment of a hasp, while the outer ends of the lower edge are each pierced with a large bolt-hole to allow the bevor to be rigidly secured to the breastplate. The upper edge and sides of the bevor, down to the level of the shoulders, are fitted with twenty-two of an original twenty-four round-headed lining-rivets with circular internal washers retaining fragments of a leather lining-band. Except for the lowest one on each side, the rivets are arranged in pairs. They are replaced throughout. A further rivet-hole at the centre of the throat probably served to secure a lining-band across the neck. The neck is decorated with a pair of widely spaced incised lines. Bought together with the sallet M.4A-1939

Method of acquisition: Given (1939-07-12) by The Friends of the Fitzwilliam Museum

The bevor is bright with light patination and score-marks of a buffing-wheel overall. The metal shows a vertical crack to the left of centre of the lower half, and some delamination at the right shoulder. Some small marks and gouges at the right edge of the lower half might conceivably be the result of impact from the point of an opponent's lance.

This type of helmet was very popular in the second half of the 15th century and was either worn on its own or with a bevor, a separate piece of armour covering the chin and the front of the neck, as here. The bevor was essential when this type of helmet was used for a type of jousting on horseback called, in Germany, the Scharfrennen, which was contested in an open field using sharp lances.

Hammered : Formed in one-piece with a high medially-ridged upper half shaped to the chin and neck, and a deep lower half extending down the chest; hammered, shaped, riveted, with incised lines and bevelled decoration
Patinating Forming