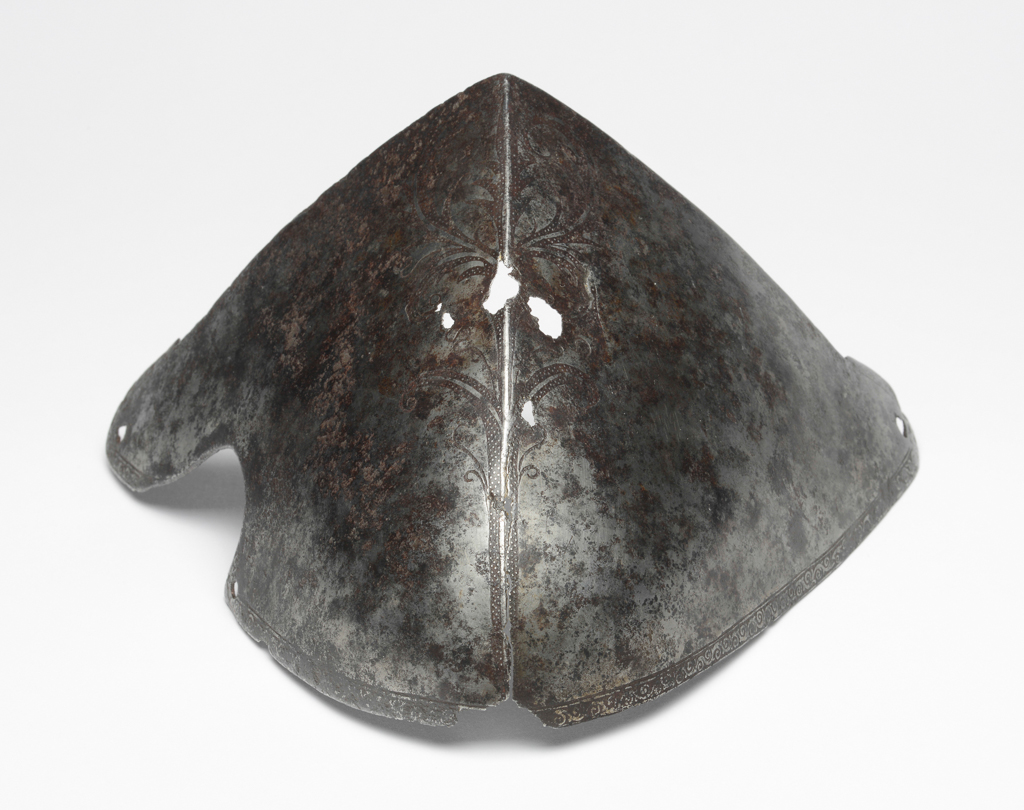 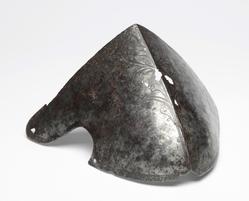 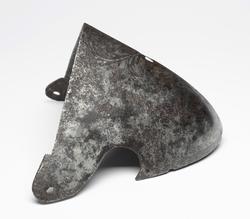 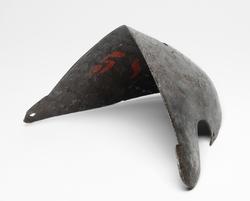 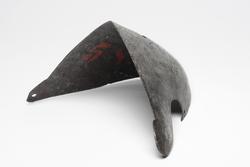 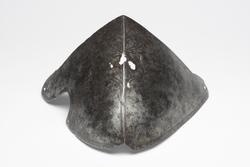 Reinforcing bevor, for use in the tourney, with etched decoration. Formed of a single, medially-ridged plate covering the lower half of the face and the point of the chin to which it is shaped. Its straight upper edge is cut with a broad, shallow notch to form the lower edge of a vision-slit. Its upper corners are rounded and pierced with small keyhole-slots to engage turning-pins. Its sides slope down and forward from the upper corners to a rounded junction at the point of the chin. The right side has a large, rounded cut-out. A small hole is pierced immediately below the rear end of the cut-out. The mid-line of the bevor shows severe rust-perforations and a split at its damaged lower end.
The edges of the bevor, except at the vision-slit and cut-out, are etched with narrow bands of alternating scrolls on a blackened ground. The mid-line of the bevor is etched with adorsed scrolling foliage and tendrils issuing from a central stem, in part stippled and blackened, and in part bright. From the crudeness of its edge and the way that it cuts through the relevant decorative borders, it is possible that the cut-out at the right side of the bevor was enlarged during its working life. The cut-out at the upper edge of the bevor may also represent a later modification.

History note: From the armoury of the Princes Radziwill, Castle of Niescwiez, Poland. To save the armoury from the Bolshevist uprising, the Lithuanian family of Radziwill moved it to their town-house in Warsaw. According to the London dealers Fenton and Furmage, the collection was acquired by the Austrian Dealers Pollak and Windonitz just before the First World War. Some pieces were sold in Germany, but most were offered for sale at Christie's, London, on 29 June 1926 and 14 June 1927 as the armoury of a 'Russian Prince'. Mr James Stewart Henderson of 'Abbotsford', Downs Road, St Helen's Park, Hastings, Sussex.

The bevor is bright with a heavy, mottled patination and some severe patches of pitting overall.

Hammered : Formed of a single, medially-ridged plate covering the lower half of the face and the point of the chin to which it is shaped; hammered, shaped, riveted, with etched decoration on a part blackened, part stippled, part bright background
Patinating Formed