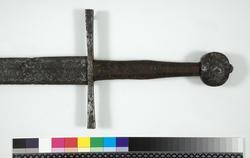 History note: Sold at the Helbing Gallery at Munich 1908

Big hand-and-a-half swords of this kind were very popular, according to many literary reference and much pictorial and monumental evidence, during the century 1250-1350, though it is now known that they were in use at least a century earlier. The fact that contemporary writers referred to them as 'Grans Espees d'Allemagne' (Great swords of Germany), and that German monumental sculpture shows very many of them, does suggest a German tendency. However, they are also shown upon very many Spanish effigies of the same period. There are also many 13th and early 14th century references to 'Espees de Guerre', 'Swords of War', 'Schlachtschwerte' and so on to distinguish them from the smaller kind of sword ('Arming Sword' in 15th century English) and to set them apart for their prime use as battle-swords. They are not to be confused with two-handed swords. A sword of the same dimensions with a similar hilt, including the cross in the central boss of the pommel, is on the tomb-effigy at Bopfingen in Wurttemburg, dated 1359, and there are others in Germany, Spain and England, all dating between c.1320-1360, too numerous to mention individually.

This sword has a long, slightly tapering blade, common right across Europe from the late 12th to the 14th centuries. The grip, which is a restoration, is long enough to use an extra hand when greater force was needed. The pommel is shaped like a wheel.