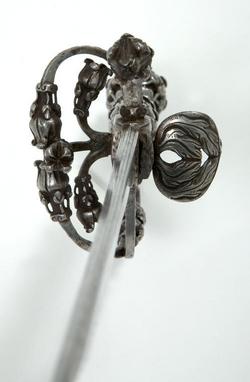 Back sword. Tall poppy-head-shaped pommel, with well-formed button, of steel carved into the likeness of the opening petals of a flower with diagonally worked tendrils with eight trefoil heads above a neat scrolled collar. Grip of steel, widening slightly towards the back, decorated in the same manner as the pommel. Knuckle-guard, of square section at top and bottom, with two opposed swellings at midpoint to match the pommel. Single outside loop-guard of the same form and decoration as the knuckle-guard; enclosed within it is a triple-branched interior guard in the same style, the middle branch extending downward to protrude below the loop-guard. Massive rear quillon, sharply downturned at a right-angle, with a large terminal loop en suite with the pommel. At the back, a looped thumb-ring attached to a small decorative plate springing from the back of a very stout quillon-block of square section. This plate is decorated with four flame-shaped leaves carved à jour from the plate.
Straight blade of triangular section, the faces hollowed and back ridged. The cutting edge is wrought to an acute point by a gentle curve toward the perfectly straight back. The blade is decorated with delicate engraving; on the obverse a series of geometric 'doodled' forming a base to support an extremely thin classical figure, helmeted, plumed and carrying a walking-stick or yard. Above this is the legend IVNTILIA NUS ROM between scrolls. Above, a pestle and mortar with the words MEFECIT SOLINGEN between similar scrolls. The design is topped by an elaborate floral scrolling motif. On the reverse, a similar geometrical base supports a second figure in classical dress in an airy dancing pose holding aloft a sword in the right hand. Between scrolls, the word PARIS TRO, with a pestle and mortar above, with a second legend ENGEL LOBAG, with the terminal designs of the obverse repeated.
Norman, type 108. Pommel is a variant of pommel type 28.

Inscription present: on a pestle and mortar between scrolls

Inscription present: between scrolls with a pestle and mortar above

Inscription present: with pestle and mortar