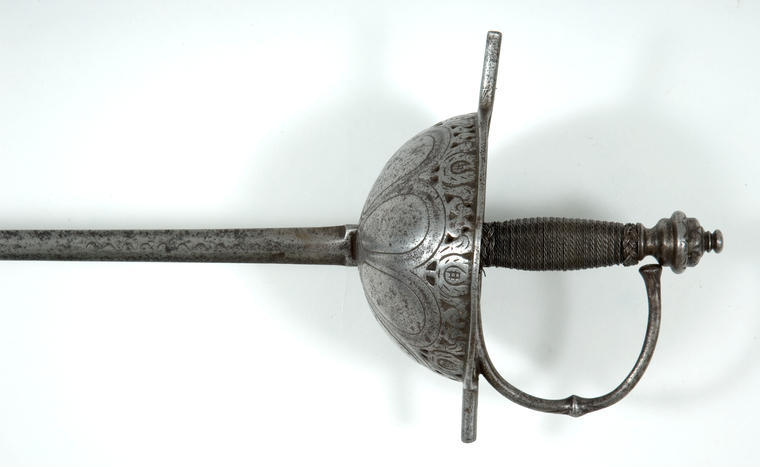 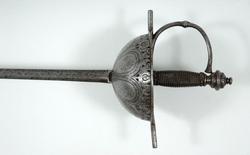 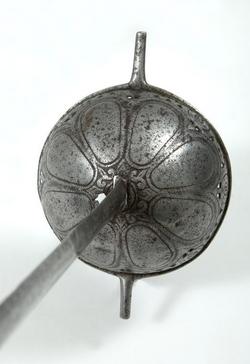 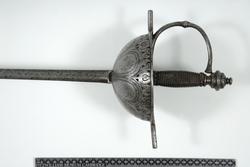 Rapier. Large handsome pommel, circular in plan, in the form of three superimposed 'cushions', the middle one being considerably wider than the others. There is a well-formed, collared tang-button and an elegant neck at the underneath, where the pommel meets the grip, which is of plain and (rather thicker) twisted steel wire, with Turks' heads at top and bottom. Very plain knuckle-guards of circular section, widening at the top with a trumpet-shape. It swells to a transverse ridge at midpoint and joins straight quillons of the same section. There are forged in one piece with the knuckle-guard and a plain hemispherical cup-guard. They have no widening terminals, and appear to have been cut off short. These are neither branches nor garda polvo. Decoration consists of oval panels engraved on the outside of the cup, radiating like petals from the hole where the blade enters, and there are vaguely formed floral shapes pierced à jour at the rim. The upper end of the knuckle-guard and the pommel are engraved with a few meandering and meaningless curved lines. Blade of flat oval section, strongly and decorated at the forte with an engraved wavy line. There is a strong, hollowed ricasso.

Spanish fashion, but probably Hispano-Dutch, or even Caribbean

The pommel is of far better quality than the rest of the hilt; it would appear that the knuckle-guard, quillons and cusp, all made in one, are crudely made as if by a village smith, as in the case with surviving Caribbean swords of this type.