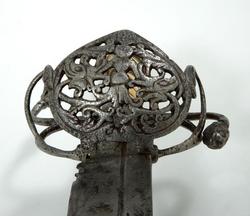 Brass (in once-gilded bronze). Pommel in the form of a warrior's head, helmeted, crested and moustached. Very short grip of bone or ivory, spirally fluted. Vertically recurved quillons with a very strong and deep ecusson, branches, outside ring-guard, flanked by two loop-guards. There are no back-guards. Each quillon terminates in a steel head crudely similar to that on the pommel. Within the ring-guard is a plate, pierced à jour with crude scrolls and dragons heads enclosing a flanking a schematic human torso. Blade back-edged, curved, with a narrow fuller near the back; engraved very crudely and inlaid in brass in the fuller the words PRINZ ANGLIE on one side and EDWARD VS on the other.

German ?. Pointedly English, or made in Germany for the English market

This hunting hanger has a fantastic pommel in the form of a helmeted head. The blade is engraved EDWARDVS on one side and PRINZ ANGLIE on the other possibly referring to Edward the Black Prince who died in 1376– a reference to a former military hero. Hounslow, in West London, was a centre for sword making in England from about 1620.