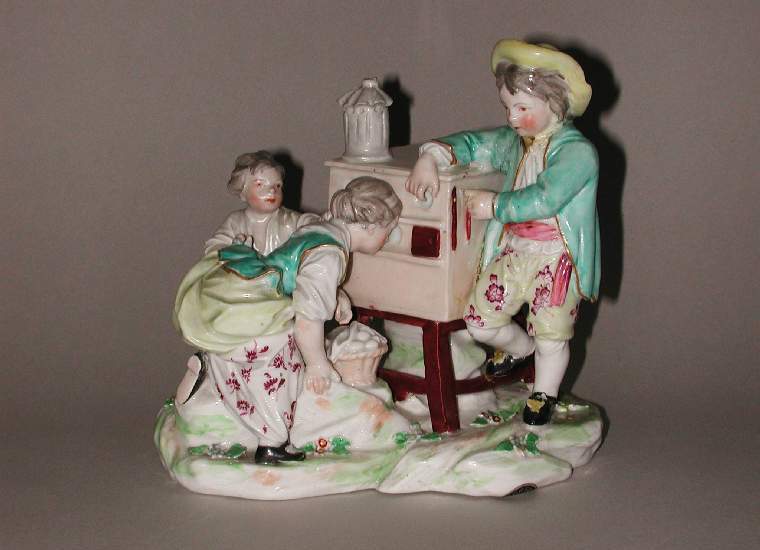 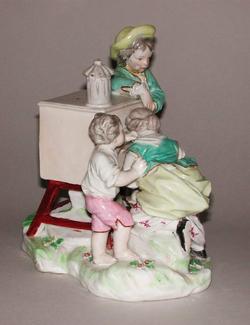 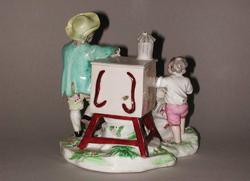 Children at a Peep Show, or Three Figures at a Raree Show

Soft-paste porcelain, slip-cast, and painted over lead-glaze in turquoise, green, pale yellow, flesh pink, pink, puce, red, brown, beige, grey, and black enamels, and gilt. The flat underside is unglazed except for a few small areas, and has a large circular ventilation hole off centre, and three large patch marks. The shallow irregularly shaped base has a rock on the left, and a tree stump on the right, which supports the base of the peep show box, which stands on four wooden legs. The boy showman stands on the right, leaving on the box on his right arm, and holding his left arm in front of him. A girl kneels on the rock, peering into the box. A basket of eggs (?) is on the rock in front of her. A little boy stands behind her.
The boy showman wears a yellow hat, a turquoise jacket with gold edging, pink sash, yellow breeches with a puce floral pattern, and black shoes with yellow bows. The girl wears a white blouse, a turquoise bodice with gold edging, a white skirt with puce flowers, a yellow over skirt, and black shoes. The small boy has a white shirt and pink beeches. All the figures have greyish-black hair and ruddy cheeks. The base is painted in pale green and brown, and has applied flowers and leaves scattered all over it. The flowers are red and yellow, blue and white, and yellow and white.

This is one of surprisingly few English porcelain figures derived from Sèvres models. The original of this group, La Lanterne Magique or La Curiosité, was modelled by Etienne-Maurice Falconet (1716-91; director of sculpture at Sèvres 1757-66) after part of the etching, La Lanterne Magique montrée à la Foire par le Savoyard, ou La Curiosité, also known as Foire de Campagne by C.N. Cochin fils (1715-90) after François Boucher (1703-77). It was mentioned in the factory's sales records in 1757. A pendant group, La Lotterie or Le Tourniquet presenté à la foire par le marchand de plaisirs, was modelled after another part of the same print. That too was reproduced at Derby.The 'Group of three Fgures at a Raree Show' was no. 94 in Haslam's price list of Derby figures.

Inscription present: circular printed with a black border with lettering in reserve 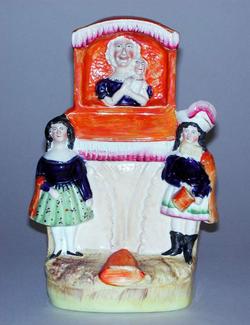 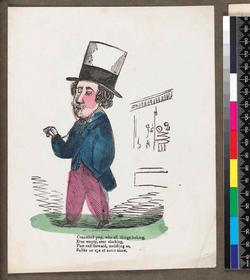 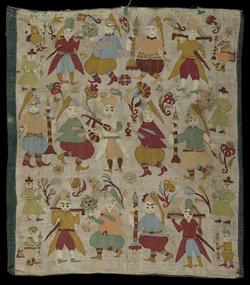 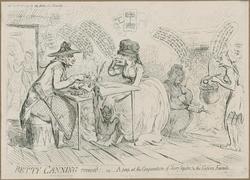 Betty Canning Revived; -or, A Peep at the Conjuration of Mary Squires & The Gypsey Family Tickled Pink: Unexpected Discoveries in the Painting Technique and Treatment History of Pinturicchio’s Virgin and Child

The grass is always greener on the other side: conservation of the Portrait of Elisabeth de Valois 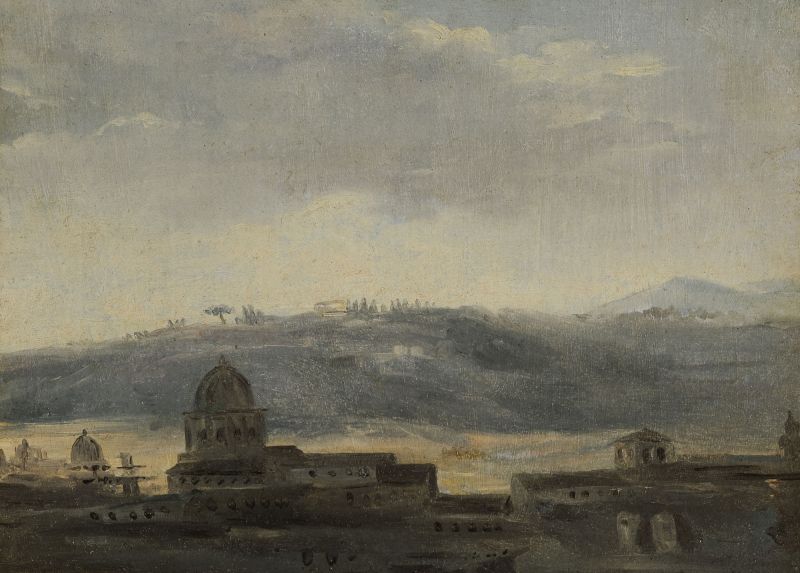 Landscape with the Horse