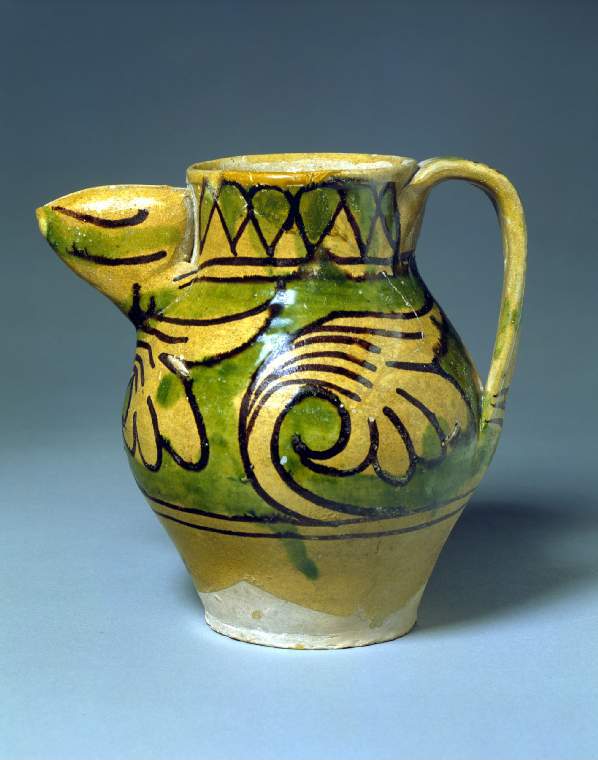 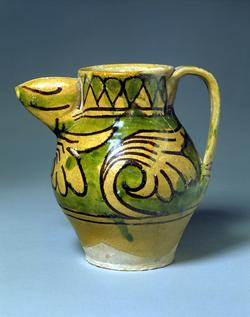 Medieval jug, of earthenware painted underglaze in brown and green with leaves, arcs, lines and stripes.

Pale buff earthenware, covered, with the exception of an uneven area above the base, with a clear, light honey-coloured lead glaze; interior and base unglazed. Painted underglaze in manganese-brown and copper-green. Approximately Shape 2. Ovoid with a flat base, contracting at the top into a cylindrical neck; broad strap handle; spout made from a strip of clay folded and pressed to the neck and shoulder.
The upper part of the body is decorated with four curling multipartite leaves, reserved in a green ground between pairs of horizontal manganese bands. On the neck, there are intersecting arcs partly filled with green, and on each side of the spout, two horizontal manganese lines flanking a wider green line. The handle is decorated with three groups of three manganese horizontal stripes alternating with two wider green stripes.

Pottery decorated underglaze in manganese and copper-green had probably come into use by the end of the twelfth century and continued for most of the thirteenth. David Whitehouse's initial view that it had been superseded by maiolica by about 1250 has been revised since the recovery of underglaze painted wares alongside maiolica of Developed type during excavations of butti (rubbish pits) at the Palazzetto Faina and the Palazzo del Popolo in Orvieto.

This shape of jug occurs with several varieties of stylized plant ornament and with different neck borders. Examples similarly decorated with multipartite leaves and arcs on the neck are in the Museo dell'Opera del Duomo, Orvieto, the Museo Internazionale delle Ceramiche, Faenza, and formerly in a private collection in Orvieto. Another, lacking its handle was recovered from cistern C of the Palazzetto Faina, and is now in the Deposito Communale. The provenance and shape of this example suggest that it too originated in Orvieto, but similar decoration occurs on vessels from northern Lazio. A jug in the Palazzo di Venezia, Rome (PV 5310) is attributed to Viterbo. 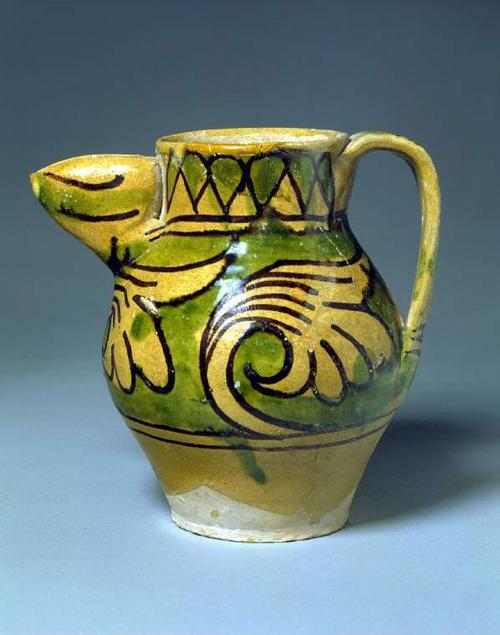