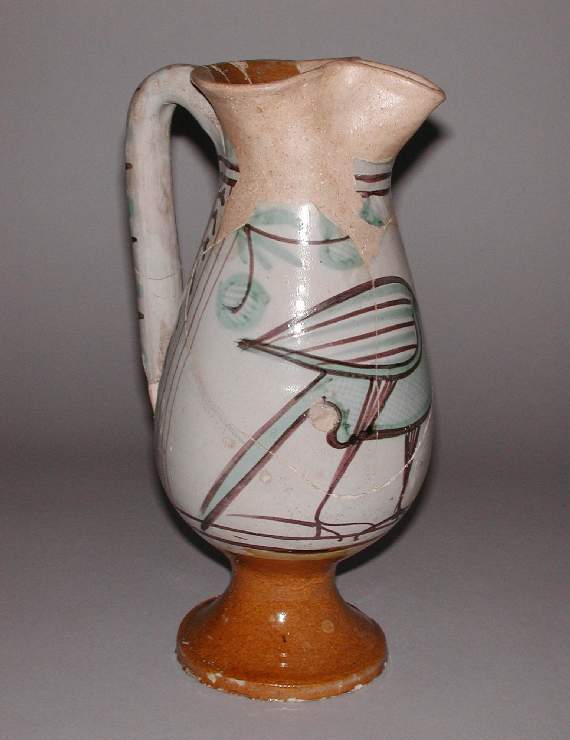 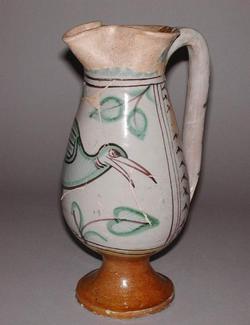 Late Medieval maiolica jug, painted in manganese and green with a bird on the front.

Pale buff earthenware. The interior and foot are lead-glazed yellowish-brown; the rest is tin-glazed pale greyish-white. Painted in manganese and copper-green.
Shape 17. Elongated piriform body with pedestal foot, short neck, trilobate mouth and loop handle.
The front is decorated with a long-legged bird with a pointed beak, with leaves above to right and left, and below to right. The handle is flanked by inverted Vs between two sets of three vertical lines. Below are two manganese bands; on the neck, two manganese bands, a green chain and another manganese band; and on the handle, eleven horizontal stripes of alternate colours.

The inverted V motifs down the sides are not typical of Orvieto jugs of this form and this jug may have come from elsewhere. The extremely smooth surface of the glaze, showing few defects under ultra-violet light, suggested doubts about its authenticity, but thermoluminescence analysis by the Oxford Research Laboratory for Archaeology and the History of Art (report dated 8 March 1994, sample 581m29) estimated that the sample was last fired between 350 and 650 years ago (1344-1644). Hence the good quality of the glaze may indicate that it was made later than some of the other jugs in the collection.