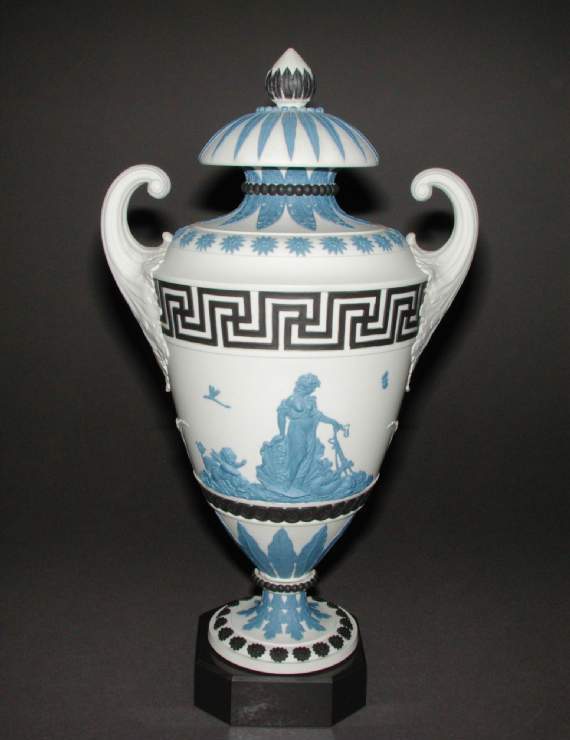 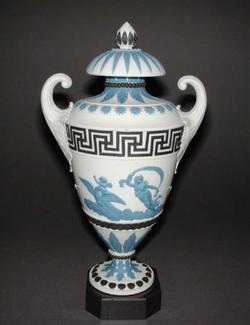 Two-handled white jasper ware vase and cover with relief decoration in blue and black reliefs and beadwork, set on polished black jasper base.

Tapering oval body with short neck and two upward scroll handles, fluted and with leafage at junction with the body; separately moulded slender stem spreading to circular foot set on octagonal base and attached to the body with a central bolt; domed cover with cone-shaped finial. The main field is decorated with a blue relief on each side: in one, Galatea (or Venus) stands in a shell drawn over the sea by two dolphins and accompanied by Cupid on a dolphin, a butterfly and a dragonfly; the other has a nymph in billowing drapery and Cupid on an eagle, above the clouds. Below there is a band of black guilloche and blue stiff leaves rising from a band of black beading at the junction of the stem and body; above there is a band of black Greek key pattern and on the shoulder, blue flower heads. The neck is decorated with blue leaves and black beadwork and the foot with black flower heads and blue acanthus-like leaves. The cover is decorated with blue stiff leaves radiating from blue beading, and the finial with black stiff leaves.

Purchased with the Rylands Fund.

Jasper, an unglazed fine stoneware with an impervious surface sheen, was introduced by Wedgwood in the mid 1770s and John Turner was the first to produce his own version (see Hillier). soon produced their own version. As on this vase, the jasper body was often decorated with sprigs - designs formed in small plaster, clay or brass moulds and applied when the clay was leather hard. The Turners were known for their sharply modelled sprigging and other leading businesses such as Adams and Spode are known to have bought up sprig moulds in the 1806 bankrupcy sale.

The Turner family business ran for some seventy years from c.1760, mainly at Lane End, Longton. Started by John Turner (1738-1787), it passed to his sons William and John from 1792-1803; they continued as Turner(s), Glover & Simpson until bankrupcy in 1806, and thereafter with various smaller potworks until 1829. They became one of the largest manufacturers of dry-bodied stoneware, making jasper, white stoneware and caneware.

The relief showing Venus, the goddess of love, in a shell-shaped chariot drawn over the waves by two dolphins uses a familiar motif recalling her birth from the sea. Her son Cupid rides a dolphin, also a commonly found attribute. The dolphins perhaps represent affection. In the second image Venus pursues her mischeivous son as he rides away on an eagle. 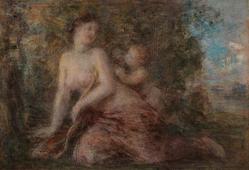 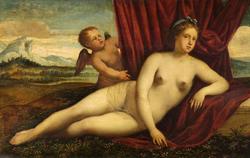 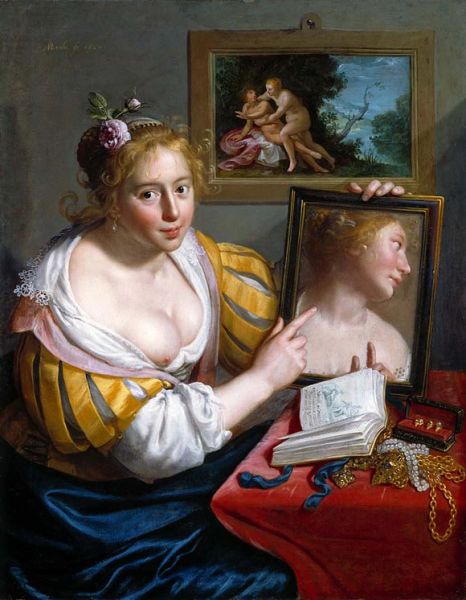 A Girl with a Mirror 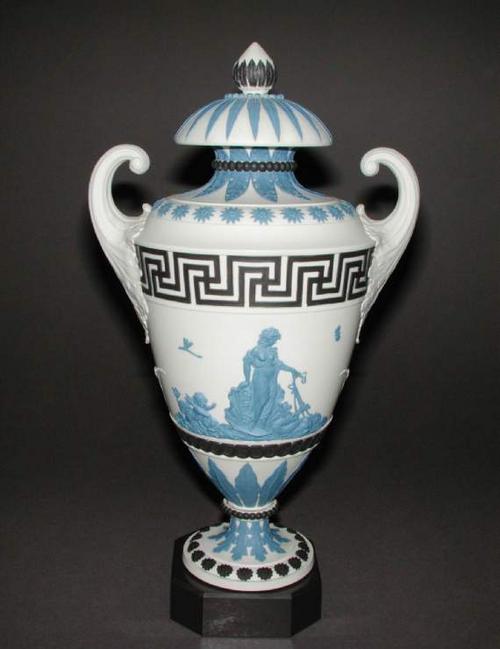