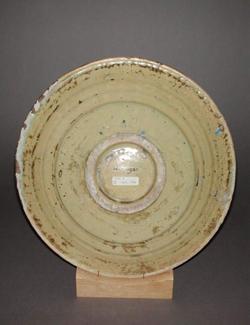 Tin-glazed earthenware dish painted in blue and yellow with a bust of Catherine of Braganza, initialled and dated 'K R' over '1682'. Border of stylized plants with buds.

Buff earthenware, the front tin-glazed and painted in blue and yellow; the back covered with bluish lead-glaze. Circular with a wide sloping rim, and shallow well, standing on a footring. Decorated in the middle with a bust portrait of Catherine of Braganza flanked by 'K' and 'R'; over '16' and '82'. The edge of the well is encircled by two blue concentric circles and there are two more round the outer edge of the rim. Between them is a border of four stylized plants with yellow and blue buds pointing outwards, alternating with four smaller plants with buds pointing round the rim.

The bust shows the Queen with the Iberian hairstyle she has in a three-quarter-length portrait of about 1660-61 by or after Dirck Stoop (1610-86) which is in the National Portrait Gallery, London, (NPG 2563). The large round curl over her forehead in the painting appears to have been misinterpreted as a small hat. The image on the dish may have been after a print engraved by William Faithorne after Stoop, published in 1661. 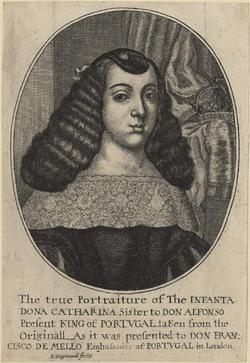 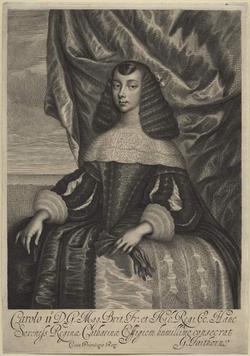 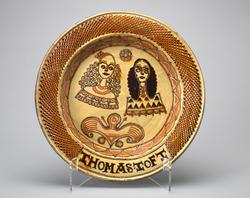 Charles II and Catherine of Braganza 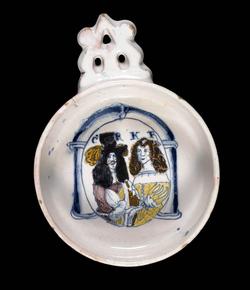 Chares II and Catherine of Braganza 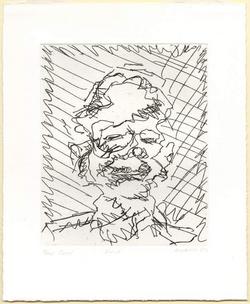 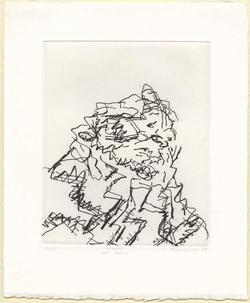 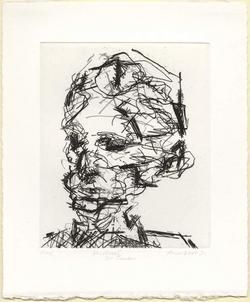