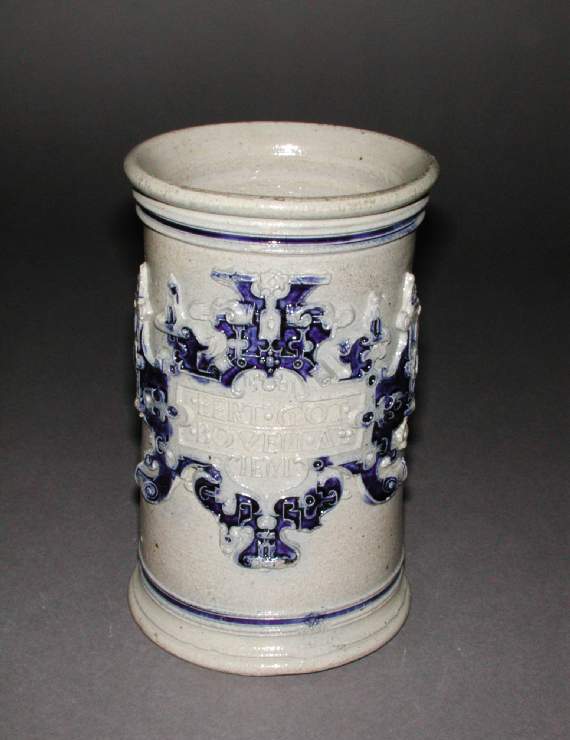 Grey stoneware, thrown, with applied moulded decoration partly picked out in cobalt- blue under salt-glaze. The cylindrical jar has turned bands around its base and top, and a projecting rim at the top. On the front is a rectangular cartouche surrounded by an elaborate Mannerist style frame comprising scrolls, strapwork, and architectural elements, partly picked out in cobalt-blue. Within it is the raised inscription '1591/'EERT.GOT./BOVEN.AL/IEM' (1591 HONOUR GOD ABOVE ALL and the potter's initials)'

Few Raeren pharmacy jars have survived in comparison with tankards and jugs. Their forms were derived from Italian maiolica jars, and Emens was probably inspired by seeing Italian style examples made by Antwerp potters. This jar has a simple cylindrical form with a projecting rim which would have made it easy to tie on a cover. Other examples have gadrooning round the shoulder and lower part which imitated the decoration of Italian maiolica jars more closely. The elaborate frame comprising scrolls, strapwork, and architectural elements is typical of Mannerist style frames of the second half of the 16th century. The inscription on this jar is not associated with physical health, but a jar in the British Museum is inscribed in German, 'These contents will make the gentlemen and highnesses sing with praise, and restore the health of he sick'. Some jars may have been used for non-medical purposes, such as the ingredients of cosmetics. Although Raeren is now in Belgium its stoneware is usually treated as German stoneware in books on the subject.

Inscription present: letters and stops in relief within a moulded frame