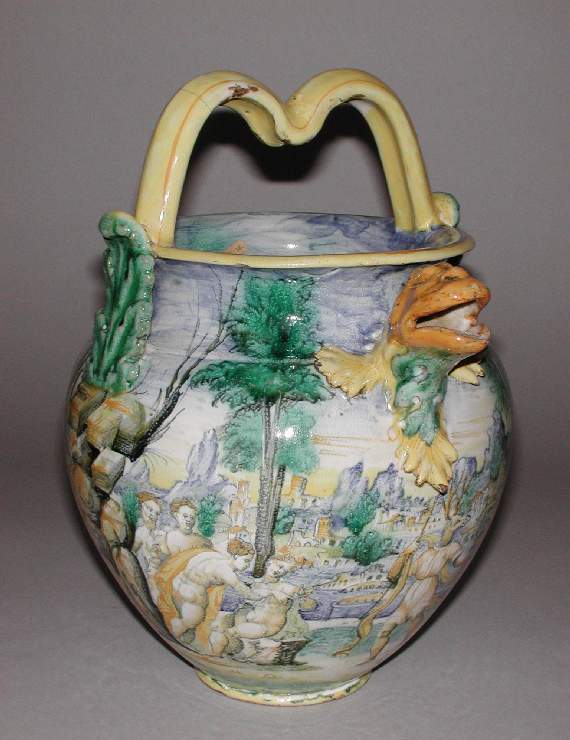 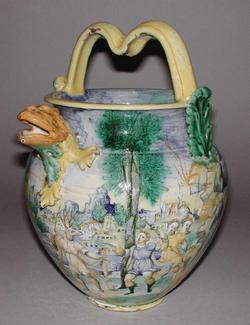 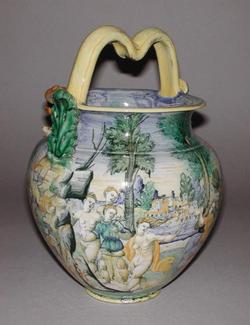 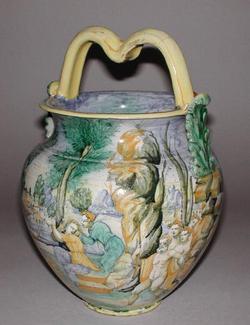 Renaissance maiolica spouted jar with a handle, painted in polychrome with Actaeon with a stag's head, Diana and other figures in a landscape.

Spouted jar with a handle. Earthenware, tin-glazed inside and outside; base unglazed. Painted in blue, green, yellow, orange, brown, black, and white.
Ovoid with short cylindrical neck, everted rim, and a spout on the shoulder in the shape of an amphibious monster's head with three webbed feet projecting at the front and sides. The bow-shaped handle passes over the mouth and terminates in moulded leaves which extend to the shoulder.
On the front, Actaeon, with a stag's head, stands between groups of three men on the right and four women on the left, one of whom, probably Diana, is seated. The landscape background has rocks to the right and left of the figures, dividing them from those on the other side. In the middle of the back there is a seated robed female with another dressing her hair. On the right, four nude men approach from behind rocks, and on the left, three women, one clothed, watch a nude woman whose left hand is raised and whose hair streams out behind her. In the landscape background there are buildings and mountains. The handle is yellow with orange bands down the edges, and the leaves below are green. The spout is orange, green and yellow. The interior of the rim is painted green and blue and the rim and edge of the base are yellow.

Probably made in the workshop of Guido di Merlino, who was in business as a potter in Urbino by 1523, and was recorded there at intervals until 1558. Otherwise Forlì is a possibility.