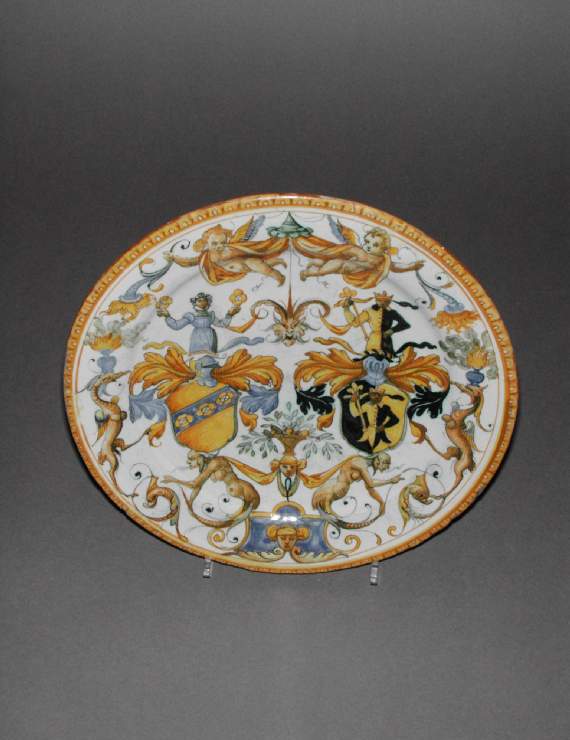 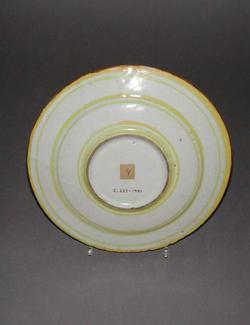 Renaissance maiolica plate, painted in polychrome with two shields of arms side by side, surrounded by grotesques.

Earthenware, tin-glazed overall; the reverse speckled. Painted in blue, greyish-green, yellow, orange, and black.
Circular with narrow, slightly sloping rim and shallow well; recessed base.
Two shields of arms side by side are surrounded by grotesques: masks, monsters, a basket of fruit, two flaming urns, and demi-human figures. The shield on the left is charged with the arms or, on a bend sinister azure three roses of the first, with above a close helmet facing to sinister with, as a crest a demi-maiden vested azure, arms extended, grasping in each hand by the stalk a flower of the arms; the shield on the right is charged with the arms per pale or and sable, a man erased countercharged, wearing an ancient crown and holding a sceptre in his right hand, above is a helmet for the Kolbenturnier, with as a crest the man as in the arms. On the edge there is a narrow orange band and orange petals over a yellow band. The back is decorated with concentric yellow bands: two round the foot, one at the shoulder, and one by the rim.

This plate and other of its type bear witness to the substantial export trade in maiolica to northern Europe, particularly to German cities. It is one of several known plates bearing the arms of Christell and Mair (or Mayr) of Augsburg, and was probably made either to celebrate the wedding of Christoph Christell (d. 1598) and Ursula Mair (d. 1626) on 3 March 1593, or at a later date during their marriage. There are at least six more plates known from the service: in the Wallace Collection, the the Städtische Kunstsammlungen, Augsburg (7597 & 7598);the Württembergischen Landesmuseum, Stuttgart (Krongut 729¬7);the Musée des Antiquités de la Seine-Maritime, Rouen;and formerly in the Richard Zschille collection 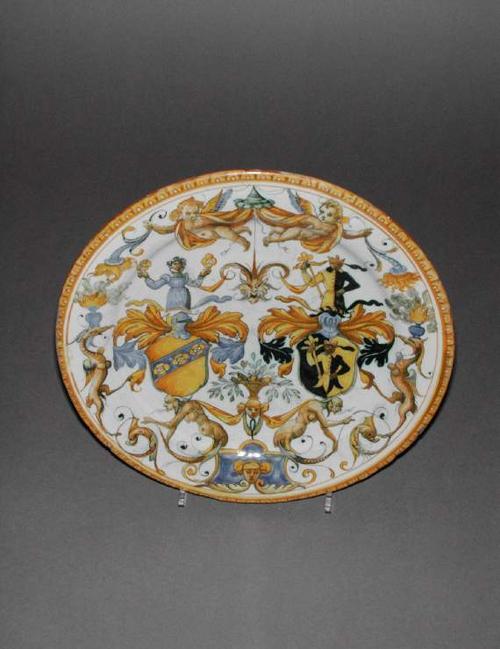