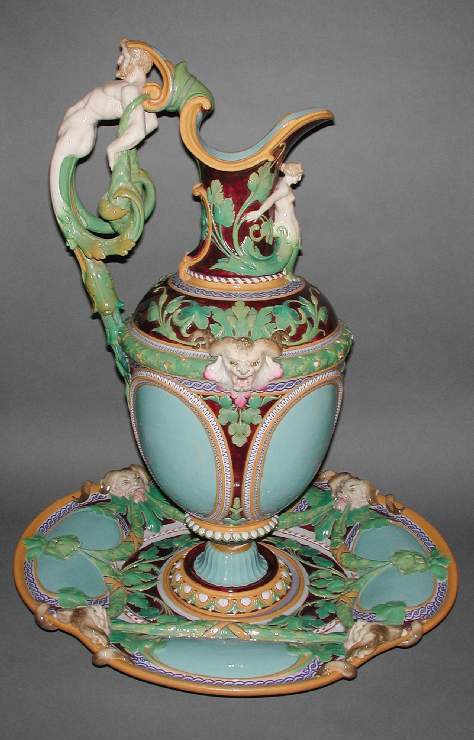 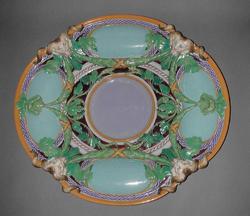 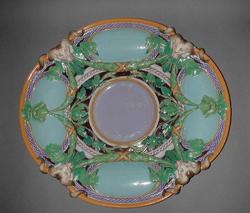 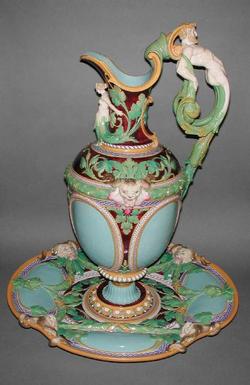 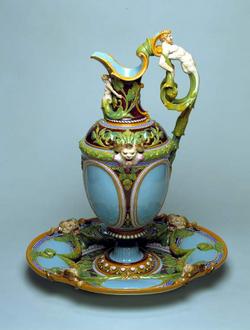 The ewer is of classical shape with a small foot, ovoid body, tall neck and scrolled rim. The highly ornate loop handle which extends above the rim is modelled as Triton, a merman bending backwards and clutching his bifurcated foliate tail. A moulded mermaid is applied below the spout, her arms spread as on the prow of a ship. The body is decorated with applied green foliage set on a magenta ground, two moulded masks and four large oval turquoise panels. The underside is hollow and clear-glazed, except for a broad foot-rim, with a central metal wing-nut bolting the base to the body.

The stand is oval with a wide flared rim. Around the rim are four more moulded masks, holding oak-leaf swags over four slightly convex, plain turquoise ovals. The circular centre is mid-blue, encircled by a thin band of ochre and a wider band of green foliage on magenta ground. The underside is clear glazed.

At least five examples of this shape are known. This and another have plain turquoise panels. Others have finely painted narrative panels. One of these, now in the Victoria & Albert Museum (no.8107&A-1863), was painted by Thomas Allen with classical gods (after Polidoro da Caravaggio) while the stand shows the Labours of Hercules (after Lebrun). It was shown by Minton at the London International Exhibition of 1862. The shape, however, was in use earlier as indicated by the date-mark, 1856, on the Fitzwilliam example and an early listing in the Minton ornamental shape book 3, c.1854-62, which reads: ‘616: ‘Ewer and stand, Jeannest, with Triton handle, H.2’6” ‘. The Greek god Triton, son of Poseidon, was the messenger of the sea; he is typically represented as the merman seen here.

Minton, founded in 1793, originally produced blue printed earthenware and, later, creamware, bone china and other products, particularly tableware. Taking over in 1836, Herbert Minton (1793-1858) revolutionised production methods and introduced new lines in encaustic and printed tiles, figures and ornamental wares. In 1858 the business passed to Herbert’s nephew, Colin Minton Campbell (1827-85), who continued the expansion. The early business traded under various names, from 1845 it was known as Minton & Co. and from 1873 as Mintons Ltd.

Pierre-Emile Jeannest, (1813 – 1857) was a French ceramic and silver designer. The son of a sculptor, he worked for Minton c.1846-1852, designing Parian figures, majolica ware and tableware. He later worked for Elkingtons, designing silverware, whilst continuing to supply Minton designs as a freelance. He also taught the model class at Stoke School of Design.

This is a particularly ambitious example of mid-nineteenth century ceramics combining Renaissance sources with innovation. Minton launched wares ‘coloured in the Majolica style’ at the Great Exhibition of 1851, to great acclaim. The new product took inspiration both from Italian maiolica, tin-glazed earthenware with finely painted decoration, and from the brightly coloured lead-glazes and sculptural forms favoured by Della Robbia and Bernard Palissy. Other factories, including Wedgwood, followed suit, but Minton’s Majolica ware was notable for an exceptionally wide palette of glazes developed under the leadership of Art Director Léon Arnoux.

Inscription present: (A or triangle) 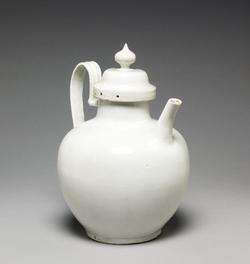 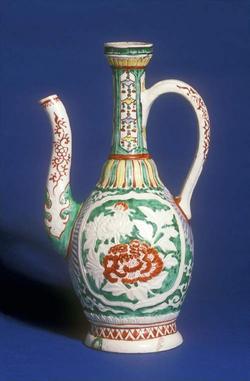 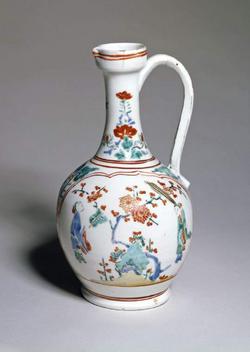 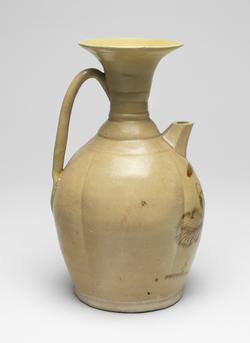