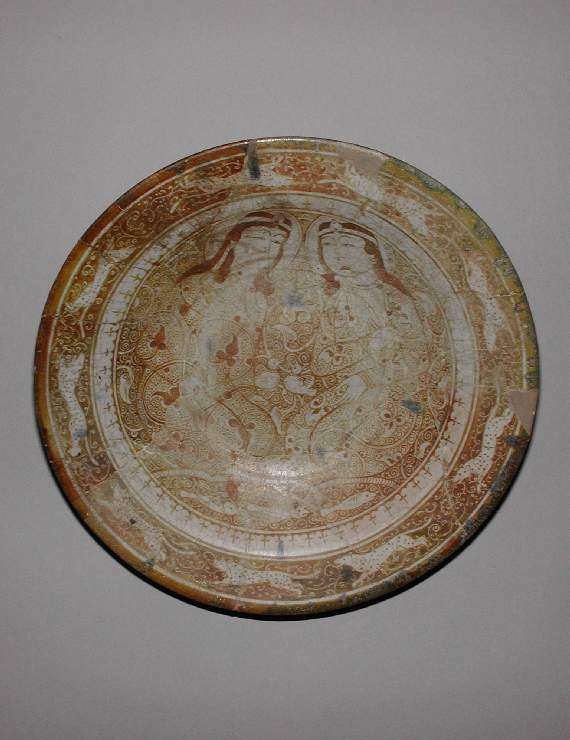 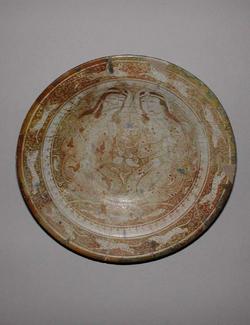 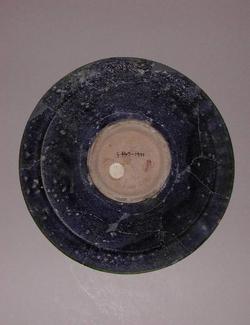 Fritware with blue and white glaze painted in lustre

Buff fritware dish, wheel thrown, with an opaque white, glaze on the interior and a pitted blue glaze on the exterior both crazed and painted with yellow-brown lustre
Shape: hemispherical dish with flange rim, sitting on a foot ring
Interior: the rim is covered with a gold band below which, on the lip, a repeating frieze of spotted, leaping cheetahs is painted in reserve against a lustred background containing fine scrolling vegetation. Painted in lustre, a fleurs-de lis pattern contained by concentric bands forms a narrow frieze around the upper body. The central decoration comprises two opposing seated figures painted in reserve against a lustred background containing birds, textured half palmettes and palmettes on scrolling vines, commas and spirals. The figures have fine features and wear headdresses and robes decorated with a repeating peacock’s eye pattern (left hand figure) or scrolls (right hand figure). Below the figures, again in reserve lustre, three fish swim surrounded by scrolling commas. Spots of blue colouring are present at irregular intervals on the body and running over sections of the lip.
Exterior: A band of lustre covers the rim, the remainder is undecorated except for the blue glaze which covers the body and runs over areas of the foot ring.

Throwing : Buff fritware, wheel thrown, with an opaque white, glaze on the interior and a pitted blue glaze on the exterior both crazed and painted with yellow-brown lustre