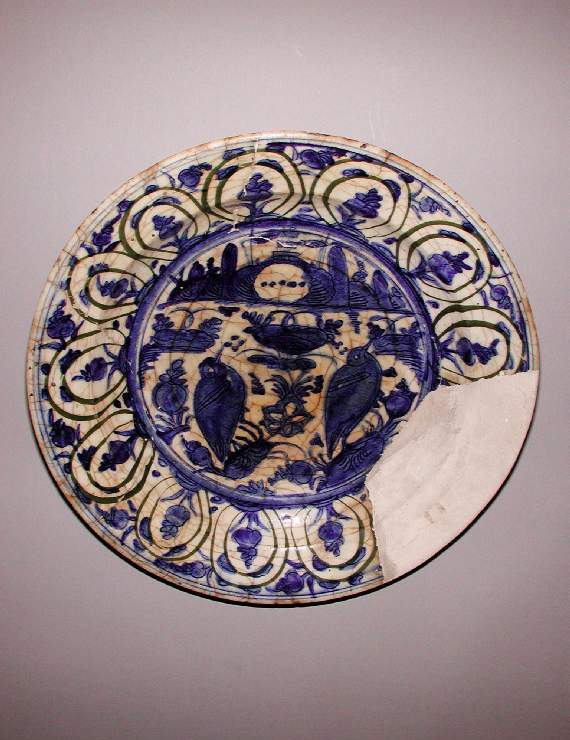 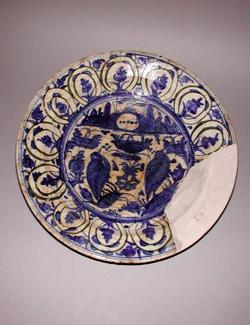 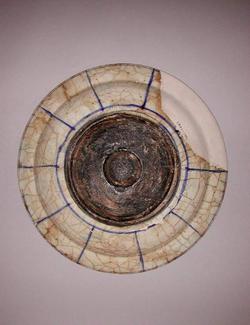 Fritware painted in blue and black under a clear glaze

Fritware, probably wheel thrown, painted in blue, outlined in dark blue and black under a clear, crazed glaze
Shape: segmental bowl with a plain rim, angled lip; sits on a low, wide foot ring. The underside of the base has a central indentation.
Interior: on the lip and upper body, a frieze of black ovular panels is painted, enclosing and surrounded by peach like flowers that form part of a spray. On the roundel, contained within a broad blue band, two birds perch on separate hillocks in the foreground of a multi-tiered rocky landscape incorporating sprouting vegetation. The upper-most tier incorporates pointed rocks and mountains with caves; on the central mountain sits a pagoda surrounded by flags on poles.
Exterior: a frieze of lines radiate from lower body dividing the surface into segments. The frieze is enclosed within two concentric lines, while another line on the lower body roughly marks the join with the base. The glaze runs unevenly over the foot ring. The base is blackened with age and several suspension holes pierce the foot ring.