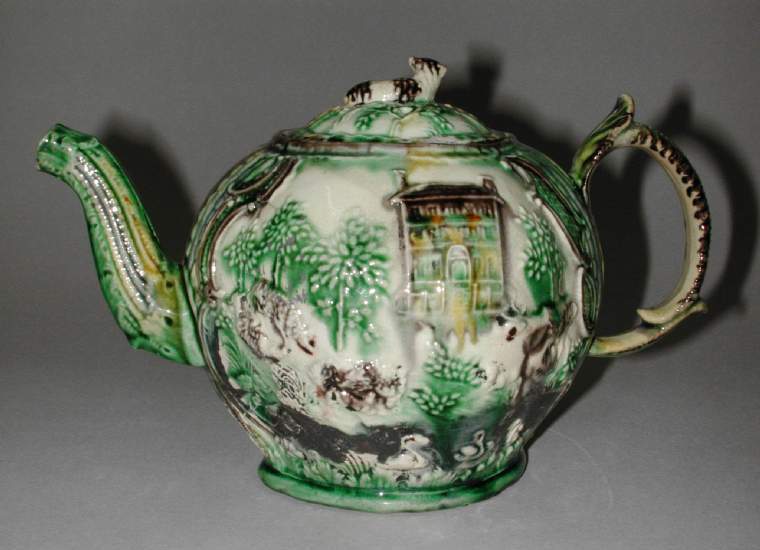 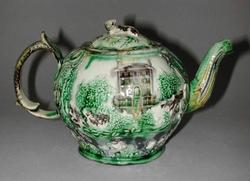 Creamware press-moulded and decorated with coloured and clear lead glazes.

Lead-glazed creamware decorated with coloured glazes and underglaze oxides in green, yellow, slate-blue and dark grey. The press-moulded teapot is a bulbous shape with a scroll handle composed of three leaves and a ribbed, s-curved spout. Both sides of the teapot are decorated with a view of a three-storey house, placed centrally and flanked by trees, with cows, sheep, swans and foliage in the foreground; the scene is bordered with C-scrolls, S-scrolls and basketwork. The lid of the teapot has a lamb knob surrounded by foliage and a pleated border.

Block moulds comparable to this particular teapot design were discovered in the Wedgwood Factory at Etruria in the early 20th-century. In 1924, Charles F. C. Luxmoore attributed these block-moulds to William Greatbatch as an invoice dated 11 January 1764 records Wedgwood paying Greatbatch for a block-mould for a “Landskip Tpt.”. However, the term “landskip” was widely used at the time and so this reference could refer to any teapot with a landscape pattern. Furthermore, there is no archaeological evidence from Greatbatch’s site to suggest he produced any ware in the specific pattern used on this teapot. Wasters of a comparable pattern have, however, been found at the sites of Thomas Whieldon at Fenton Vivian, Humphrey Palmer at Hanley and an unidentified potter at Union Street, also in Hanley. At the latter two sites, the wasters included creamware with underglaze colours, like this teapot. It is therefore not possible to attribute this teapot or the Etruria moulds to a specific potter.

The teapot features a so-called “landskip” pattern. “Landskip” was a term widely used in Staffordshire potters’ documents in the 1760s to refer to pastoral scenes, which, based on the large number and variety of surviving examples, were a very popular subject. The particular landscape design on this teapot was produced in various materials in addition to lead-glazed creamware, including enamelled salt-glazed stoneware.