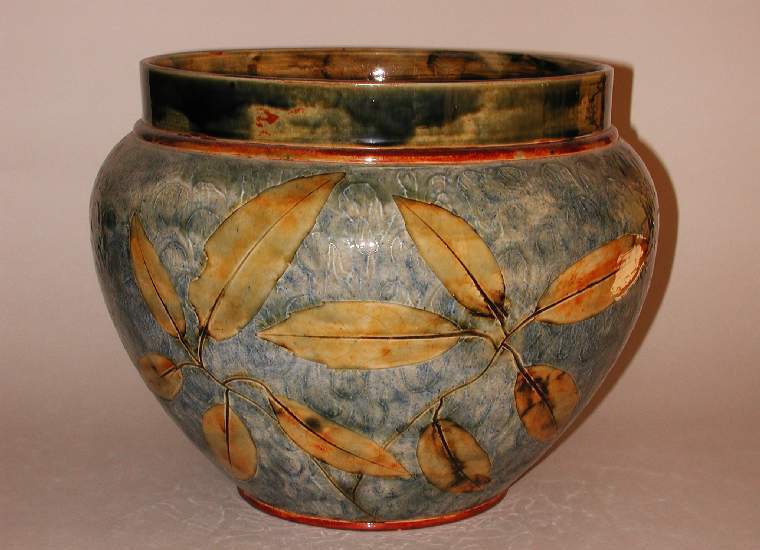 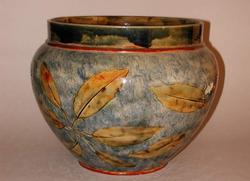 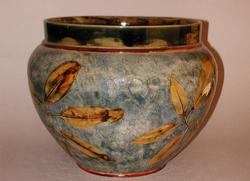 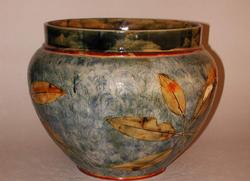 A large, thrown, stoneware pot, the sides of which curve upwards and outwards in a convex curve from the base, contracting at the top into a short, cylindrical neck. The sides are decorated with the impression of four laurel leaf sprays, filled with shades of olive-green and brown, which appear to float in the sky. The background is thinly painted in blue, over a cream-grey ground covered with a raised leaf pattern. The neck is painted inside and out in mottled blue and olive-green; there is a raised brown band where it joins the body, matching a thin brown ring which forms the foot. The interior is unpainted and lightly glazed at the bottom. The underside is flat and unglazed, except for the rim.

History note: Purchased as furnishing at an unrecorded date and accessioned in 1980.

Method of acquisition: Bought by Unknown

This is an example of Doulton's 'Autumn Foliage Ware', originally known as 'repoussé ware'. Real leaves were pressed into the soft clay and then removed to leave a faithful impression; autumn tints were used for the colouring, often with a mottled background. The technique, mainly used for planters, bulb-bowls and vases but also on other items, was popular and large numbers of Autumn Foliage pieces were produced between 1883 and c.1914, and a few later examples up to the 1950s. The impressed number on this example indicates that it is series ware. Doulton made a wide variety of series ware fern and flower pots from c.1875-1915, limited editions designed by a senior artist and executed by assistants in quantities of a few dozen up to c.1,000. The circle, lion and crown mark indicates that this jardinière was made between 1902 and c.1922. 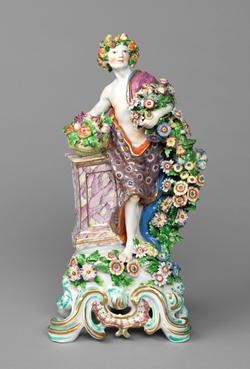 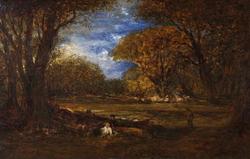 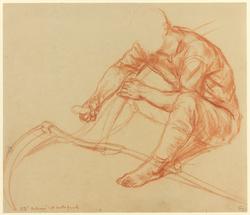 A study for Autumn 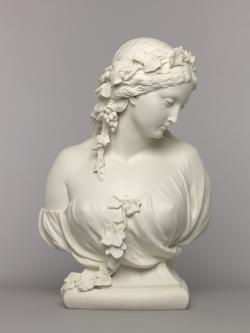 Still life with a lobster