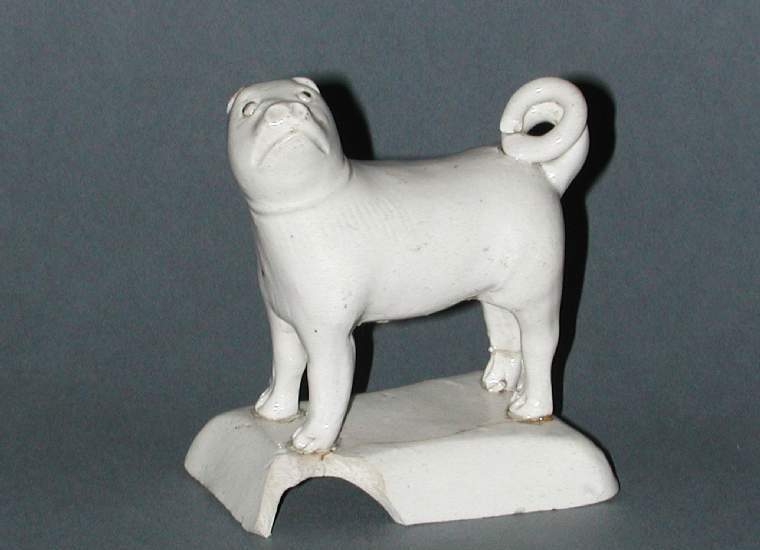 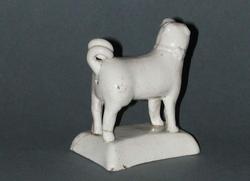 White stoneware with brown slip details and salt-glaze. The press-moulded dog stands on a rectangular base with chamfered sides. Its head is turned to one side and titlted up and its long tail is tightly coiled into two loops. It wears a collar with a four-lobed flower at the back. The pupils of the eyes are put in with brown slip.

History note: Provenance unidentified before bought by a porter at Puttick and Simpson's, known as “Mack”, on behalf of a client; when his client refused to pay, Mack sold it for £8 with C.801-1928 on 8 October 1920 to Dr J.W.L. Glaisher, FRS, Trinity College, Cambridge

Pugs were a particularly popular breed of dog in the 18th-century. The breed’s popularity and its adoption as the symbol of the ‘Order of the Pug’, a secret society that developed in Europe after Pope Clement XII banned Freemasonry in 1738, inspired the Meissen factory in Dresden to produce hard-paste porcelain pugs. Eager to emulate the fashionable Meissen products and to capitalise on the popularity of the breed in England, many English potters produced their own pug models.

Press-moulding : Press-moulded white stoneware with an applied coil of clay for the tail and dots of brown slip for the pupils; covered in a salt-glaze
Salt-glazing 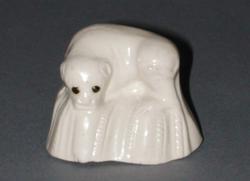 Pug on a Cushion 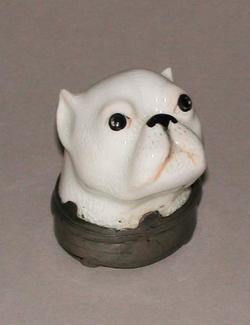 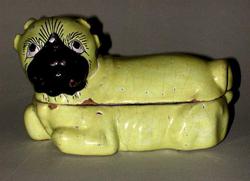 Box in the form of a Pug 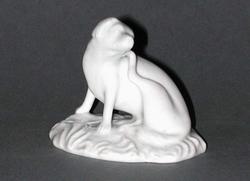