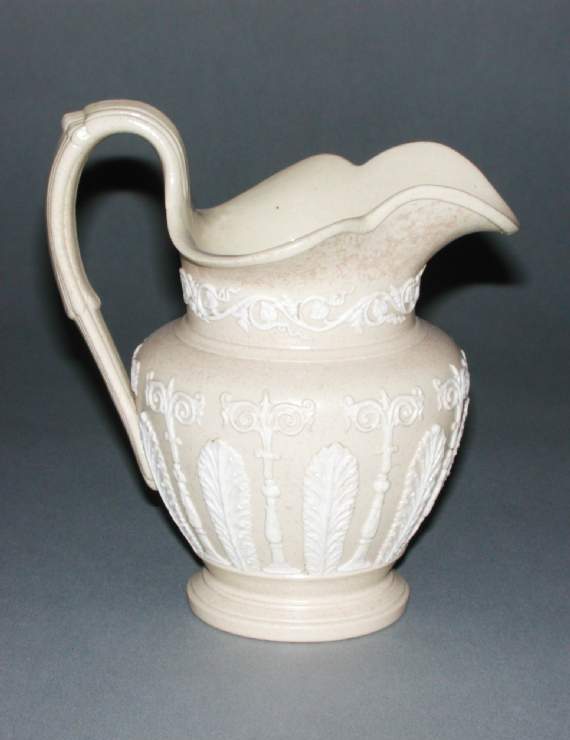 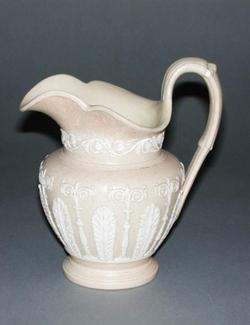 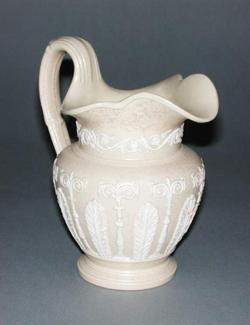 Pale buff stoneware with white reliefs; smear-glazed. Urn shaped body standing on a small foot with wide neck, flaring and scalloped at the rim and lip. Neo-classical decoration of vertical, stylised leaves and 'candelabra' motifs, alternating around the body, and a band of scrolling foliage around the neck. The interior is fully glazed. The underside is flat, within a foot-ring.

Bequeathed by A H Palmer

Smear-glazed jugs were popular in 19th Century homes, where they were used for water, beer milk and other liquids which might now be kept in bottles, cans or plastic jars. The size and style of this example suggest it may be a milk jug. The smear-glazing makes the most of the way that colour-stained clays show off crisply-moulded ornament, here in contasting off-white sprigs, and the stoneware is sufficiently durable for everyday use. Sprigging, or designs formed in small plaster, clay or brass moulds and applied to leather hard clay, was a common form of decoration from the late eighteenth century. From around the mid 1820s, such jugs were more often made in two-piece relief moulds. There are several examples in the Fitzwilliam Collection.

The Ridgway family produced stoneware and china in Staffordshire from the 1790s until the 20th Century. The pad mark on this jug was used between c.1815-1830 when, trained by their father Job, the brothers William and John were known for producing this type of drab (coloured) stoneware decorated with applied relief sprigs. A Bell Works pattern book indicates that it was probably made there, though the brothers also operated at Cauldron Place Works and, in 1830, separated to run their own factories. The family were also noted philanthropists, William Ridgway built alms houses and a school for local children – many of whom he employed in his potteries. 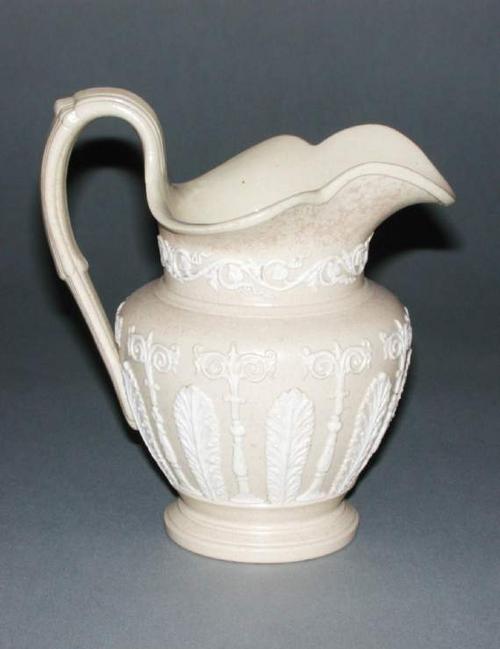