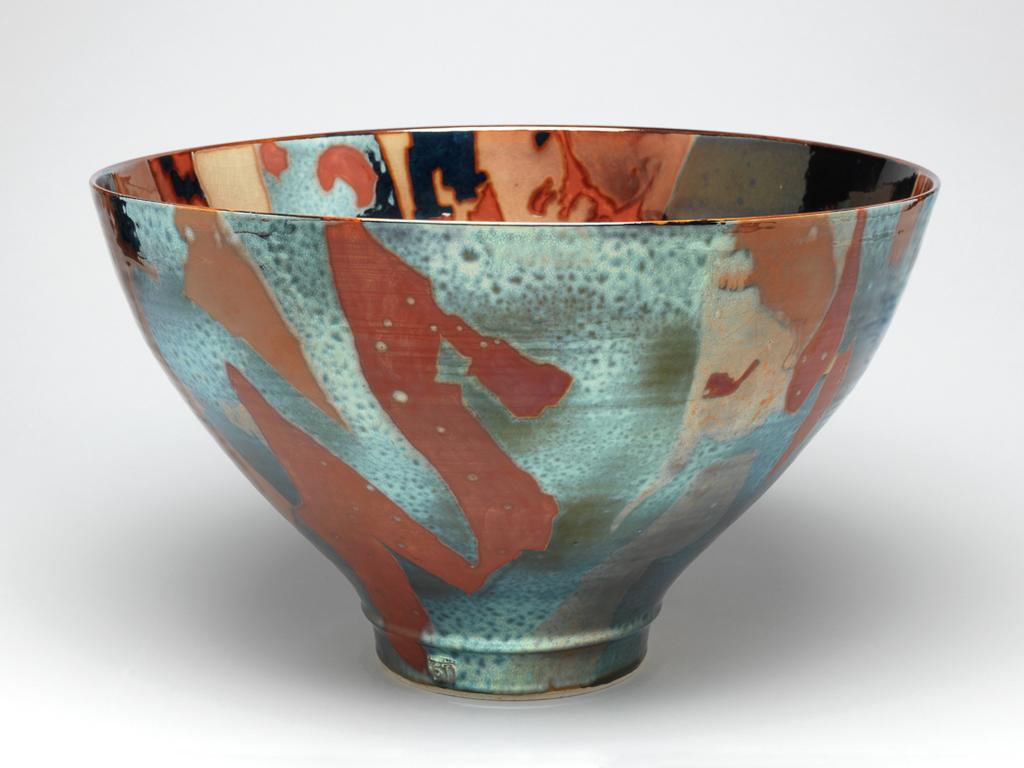 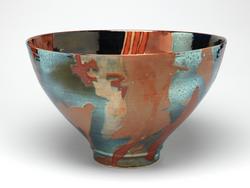 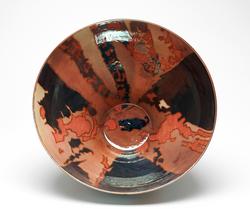 Earthenware, thrown, decorated with reduction fired copper and platinum lustres. Circular with deep curved sides, standing on a high footring. Decorated inside and outside with irregular areas of red, orange, brown, and black lustrous pigments; the base, and a narrow zone of the footring are lavender-blue with randomly-placed brown spots

History note: The Scottish Gallery, 16 Dundas Street, Edinburgh, from whom purchased by the donors

Probably made at Thorpe Hall, but in 1996 Taylor moved to Cornwall, and set up his pottery at Brea Farmhouse, near Lands End.

Text from object entry in A. Game (2016) ‘Contemporary British Crafts: The Goodison Gift to the Fitzwilliam Museum’. London: Philip Wilson Publishers: Sutton Taylor first trained as a teacher in the 1960s and worked in Manchester before moving to Jamaica. There he met the potter Cecil Baugh (1908–2005) and travelled to Central America, Mexico and the USA before returning to England in 1970. He set up his first pottery with an electric kiln at Temple Newsam, Leeds in 1971 where he produced stoneware and porcelain and experimented with laminated clays. In 1975 he built a wood-fired kiln at the Almshouse in Aberford and began to experiment with raku, low-fired glazes and on-glaze pigment reduction using local clays and earth pigments. He worked on the ancient Persian technique of lustre, decorating pottery with metallic surfaces, and exhibited his first series of lustre pots in Leeds in 1976 moving to a studio at Lotherton Hall, Leeds where he worked from 1976 to 1990. From then on he has exhibited internationally winning the Grand Prix de la Ville de Vallauris 9th Biennale in 1984 and over thirty international museum collections have acquired examples of his work. Landscape and geology continue to inspire him and he now lives and works in Cornwall. Sutton Taylor: ‘This was a geologically inspired piece, the patterning deriving from rock stratifications in cliffs and the clay body from a layer of boulder clay exposed by cliff falls. Living as I now do in Cornwall I draw on the rich sources of minerals that can be excavated from abandoned mine workings. The tin, copper, arsenic and lead, which exist in complex combinations, provide me with a palette of colours and textures which I love and feel to be uniquely mine.’

Inscription present: ST in seal, square at top and rounded at bottom 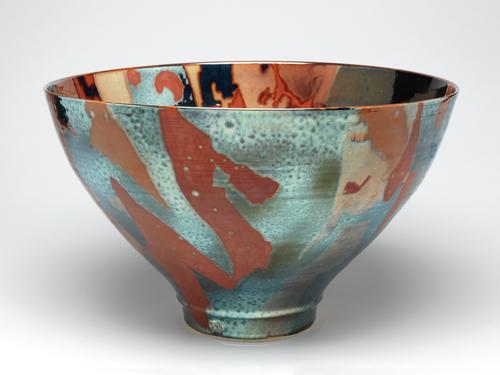