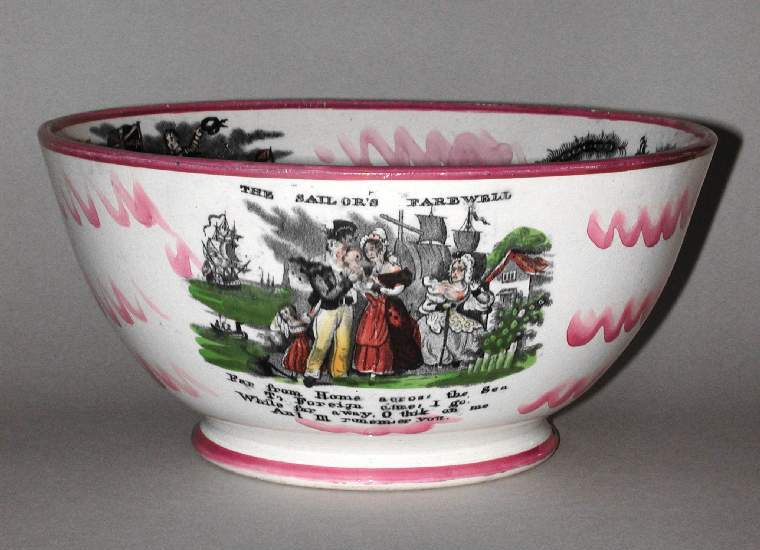 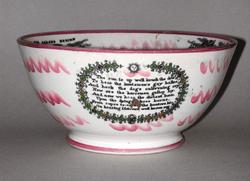 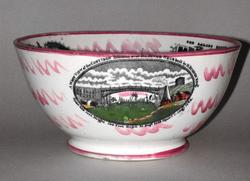 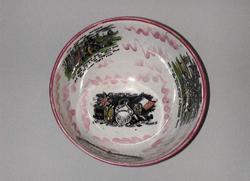 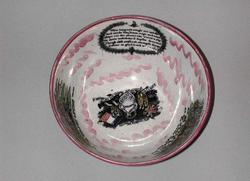 White earthenware, transfer-printed in black with text and images, clear glazed and painted with enamels and pink lustre.

Hemispherical body standing on a low, slightly flaring, foot. Decorated with four transfer-prints over-painted with enamels on the inside, and three more on the outside. The rim is coated with pink lustre and there are squiggles of pink lustre on the body, between the transfers. A pink lustre band runs around the foot. The underside is flat and glazed, with a raised foot-rim.

The images and text are as follows:
(i) inside, centre: a trophy with a lion, an eagle, the Union Jack, the French flag, a shield inscribed 'CRIMEA', and the words, 'MAY THEY EVER BE UNITED. VIVe L'EMPREUR GOD SAVE THE QUEEN'
(ii) inside: Three sailors with a Union Jack entitled below 'THE FLAG THATS BRAVED A THOUSAND YEARS/THE BATTLE AND THE BREEZE'.
(iii) inside: 'THE SAILOR’S RETURN', above an image of same, with ship, above verse: 'Now safe returned from dangers past/With joy I hail the shore./And fear no more the tempests blast/Nor Oceans angry roar.'
(iv) inside: A wreath of eyes and eyelashes with a ship at top centre, enclosing the verse: 'When tempests mingle sea and sky/And winds like lions rage and rend/Ships o'er the mountain waters fly,/Or down unfathom'd depths descend/Though skill avail not, strength decay/Deliver us good Lord we pray.'
(v) outside: An oval view of Sunderland Bridge entitled 'A WEST VIEW of the CAST IRON BRIDGE over the RIVER WEAR built by R BURDON Esq./Span 236 Feet Height 100 Feet Begun 24 Sept. Opend. 9 Augt 1796'
(vi) outside: 'THE SAILOR'S FAREWELL', above an image of same, with a ship in the background, above verse: 'Far from Home across the Sea/To Foreign climes I go./While far away O think on me/And I'll remember you'.
(vii) outside: A wreath of lozenges with a sun face at top centre, enclosing a verse: 'The sun is up we'll brush the dew/To hear the huntsman's gay halloo/And hark the dog's enlivening cry/Now see the horseman gallop by,/And now we hear the distant horn,/Upon the dying echoes borne./From copse to copse the hunters hie/On hearing Drivers well known cry.'

Given by G.H.W. Rylands in memory of his mother Betha Wolferstan Rylands.

Images of ‘the Sailor’s Farewell and Happy Return’, popular from the mid-18th Century in engravings or on ceramic plaques as well as on jugs and bowls, were used as a mark of patriotism during the Crimean War. A contemporary account records that ‘The Sailor’s Farewell’, hung on the wall when the sailor left shore, would be swapped for ‘Return’ when he came safely home.

Sunderland potteries were particularly known for their use of thinly hand-painted lustre, together with hand-painted transfer-prints which feature designs, verses and mottos. The designs usually have local or topical relevance and often allude to seafaring. Scott Brothers (also known as Scott’s Pottery), founded in 1788, was one of the most important Sunderland producers of lustre transfer-print designs and had a substantial export market as well as domestic customers.

The ‘Crimea’ transfer dates the jug to the time of the Crimean War, 1853-56. It was used by Scott Brothers on jugs, mugs and bowls, although the design is thought to have been bought from another pottery, known as ‘Garrison’, and was also used by Moore. Designs were frequently copied between potteries and the original copper printing plates changed hands when firms closed. Both this and the ‘Sailor’s Farewell’ and ‘Return’ verses were used by other Sunderland potteries such as Moore, Ball and another known as ‘Garrison’. These three transfers are also found on a Sunderland jug in the Fitzwilliam Collection (C.1090-1928). Images of the Wear Bridge appeared on Sunderland pottery as early as 1793-6. This oval text and image transfer dates from c.1820-40; Moore & Co produced a very similar one soon after, though the style of the text is different. 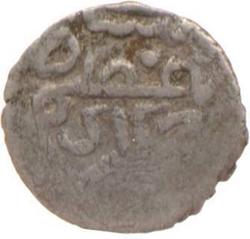