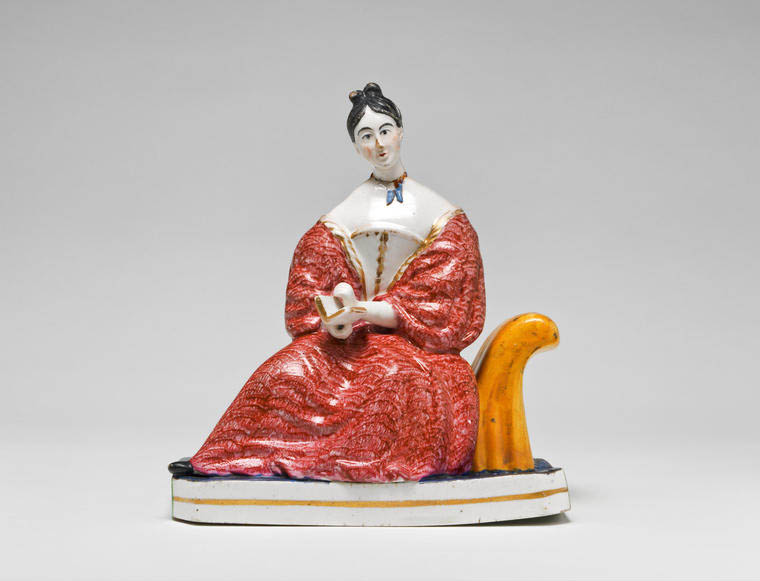 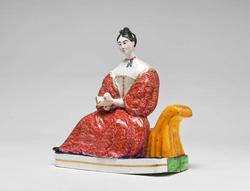 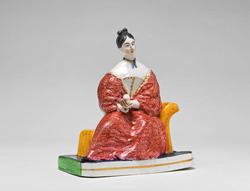 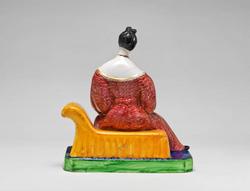 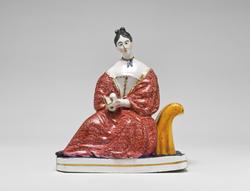 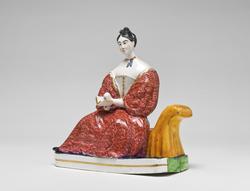 White earthenware; the figure is press-moulded in two parts, with separately moulded left forearm, right hand, book and necklace, and set on a separately moulded couch and base. Painted in black, blue, green, yellow, blue, red and flesh pink enamels, and gilt.

Madame Malibran sits on a mustard-yellow chaise longue, holding a book; her legs are folded to her right. She wears a long gown, finely painted in shades of a deep red to show the weave of the fabric, which is open to show a white bodice; both are trimmed with gilt. Her necklace is a sky blue colour. Her hair, gathered in a top-knot, is black; a black shoe shows beneath her dress. The book is edged with a thick gilt line. The base is rectangular, with flattened corners. A thick gilt line runs across the front; the back and sides are painted green and the top blue. The underside is recessed and glazed, with a round vent hole towards the centre back. The back is moulded and decorated.

History note: Puttick and Simpson’s sale on 2 March 1909, in lot 44 with a Staffordshire castle and a damaged figure of ‘the lost piece’ (C.921-1928) for 26/- (one pound six shillings). Bought by Mr S Fenton for Dr Glaisher, Trinity College, Cambridge. Dr Glaisher considered this the principal piece, and the castle ‘of no value’. He notes: ‘The sale contained a number of Staffordshire figures some of which were put in to it by Gill & Reigate, of Oxford St having their label’

Maria Felicita Malibran (1808-1836) was a popular opera singer, of Spanish-French origin, who trained in Naples. She made her London debut at the King’s Theatre in 1825, and was particularly known for her performances of Rossini and Mozart. In 1836 she suffered head injuries on falling from a horse, and shortly afterwards collapsed and died following a performance in Manchester.

Rackham (1935) lists this figure as by unidentified Staffordshire potters, and there were many manufacturers of figures working in Staffordshire at this time. However, it shares a number of features with figures that have been attributed to John and Rebecca Lloyd, who made both earthenware and porcelain figures at Shelton between 1834 and 1852. These features include the complex moulding with several subsidiary parts, the generous use of gilt, and the well-fired use of enamel colours particularly associated with the Lloyd factory, notably the distinctive, fine red enamel painting of the gown, and the sky blue colour used for the necklace. Thus, it is possible that the figure was made by the Lloyds, at Shelton.

The figure is identified by an engraving for the Dramatic Magazine by J Rodgers, after A M Huffam, held in the Victoria & Albert Museum. This shows a woman with similar features in the same pose, with the title ‘Mme Malibran Garcia’. There also exist versions of the figure which bear a title.

Press moulding : White earthenware; the figure is press-moulded in two parts, with separately moulded left forearm, right hand, book and necklace, and set on a separately moulded couch and base. Painted in black, blue, green, yellow, blue, red and flesh pink enamels, and gilt. The underside is recessed and glazed, with a round vent hole towards the centre back. The back is moulded and decorated.
Painting
Lead-glazing
Gilding 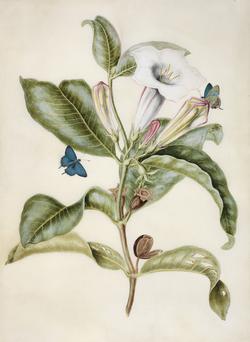 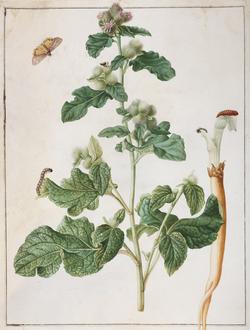 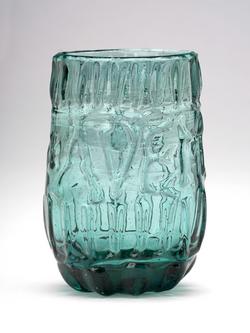 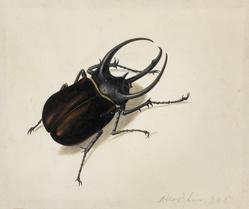