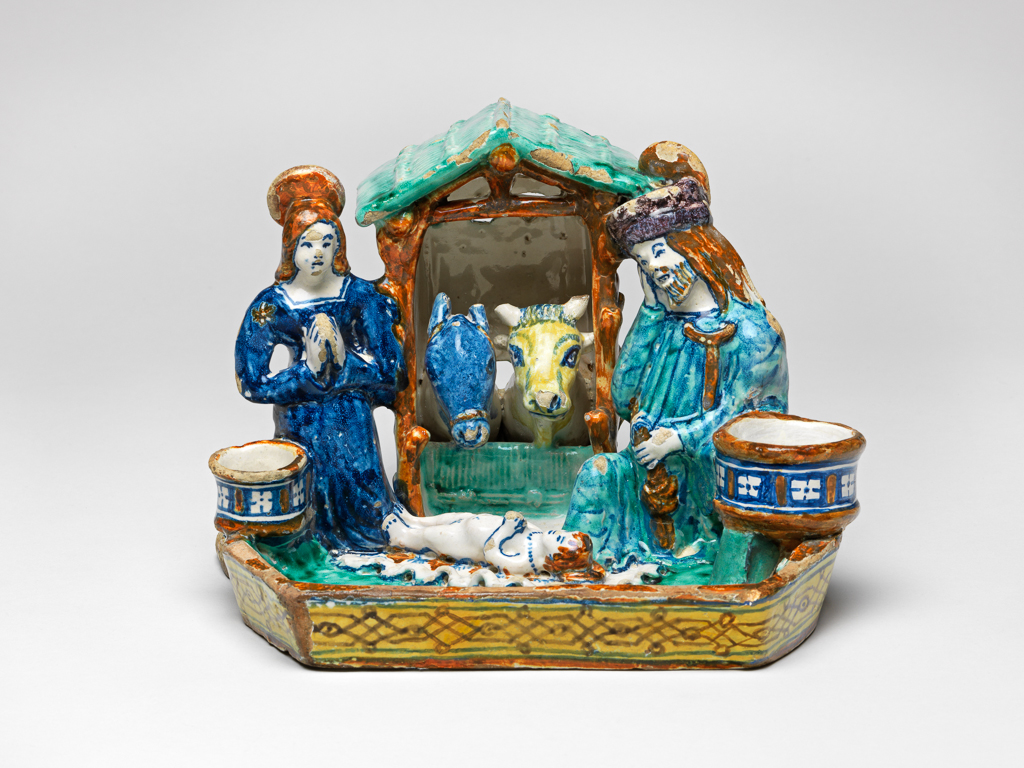 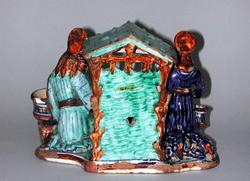 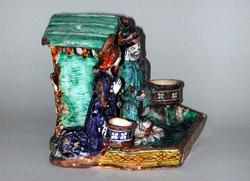 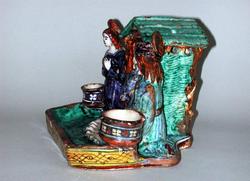 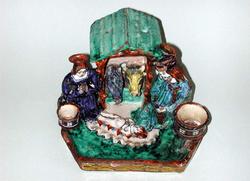 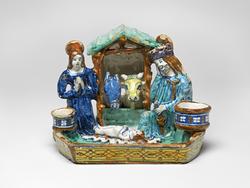 Maiolica inkstand with a three-dimensional Nativity group at the back, and an inkwell and candlesocket on either side

Dark buff earthenware, tin-glazed on the upper surfaces; base streaked with glaze. Painted in dark blue, green, yellow, brownish-orange, and manganese-purple. Modelled in the form of a shallow tray with a Nativity group in the round at the back, a cylindrical inkwell on the right, and a smaller cylindrical candle socket (incorrectly restored) on the left. The Virgin Mary and St Joseph kneel on either side of a wattle stall occupied by an ox and an ass. The infant Christ lies on a wavy-edged cloth between them. In front of the figures is a space for pens, enclosed by a low wall, decorated on the exterior with strapwork.

Label text from the exhibition ‘Madonnas and Miracles: The Holy Home in Renaissance Italy’, on display at The Fitzwilliam Museum from 7 March until 4 June 2017: A household object such as this inkstand allowed its owner to recall the Holy Family while writing or doing accounts. In the colourful rustic scene, watched by Joseph and the animals, Mary adores the baby Jesus, who lies naked and motionless on a cloth like a corpse, as if to foretell his eventual death.

Maiolica inkstands with three-dimensional figures were the ceramic equivalents of the bronze candle- and inkstands made by fifteenth-century sculptors such as Riccio. They enjoyed a fairly short period of popularity from probably about 1490 to between 1510 and 1515, and then seem to have been less fashionable until about 1570. This example is very close in appearance to three others in private collections, one of which is dated 1516. The iconography differs in several respects, but the figures and animals are modelled in the same simple style, and they all have a flat base, and at the front, a low wall. The figures and animals are comparable to those on fifteen more elaborate inkstands which have curved double-walled bases with inscriptions round the sides, and are raised on three lion, or hound supports. For a list and illustrations of these, and the examples with flat bases, see Documentation, Wilson and Sani, 2007.

This inkstand was formerly attributed doubtfully to Faenza, but has been reattributed to Colle Val d'Elsa on the basis of the inscriptions on some of the other inkwells, in which the maker described himself as IOHANES NICHOLAI DEMANZONIBVS DECOLLE or GIOVANNI ACOLLE, and the discovery of a manuscript which confirms that the Manzoni family had a pottery at Colle Val d'Elsa (Siena), and concerns its sale in 1530. See Wilson and Sani, 2007, for an extract from the notarial document. It therefore seems possible that similar inkstands without inscriptions and the three-dimensional model (C.2180-1928) were made there though possibly not all in the same workshop. This inkstand has had the inkpot on the right incorrectly restored. On other examples the pot is not cylindrical, but of a bulbous from. See Documentation, La Grazia dell'Arte, for an inkstand with the original bulbous inkpot. 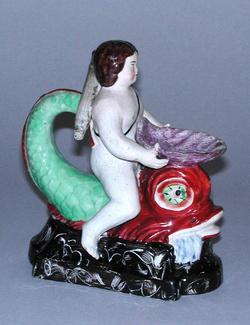 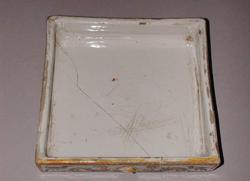 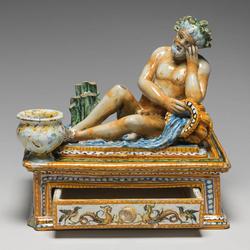 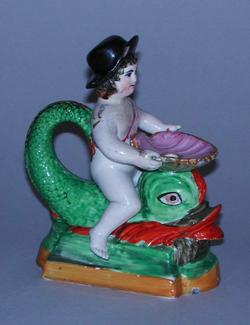 Tureen and cover in the form of a carp 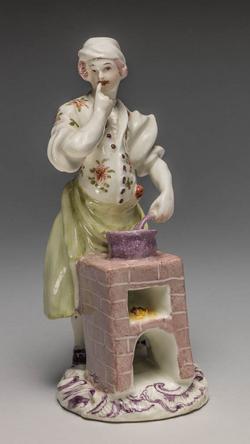