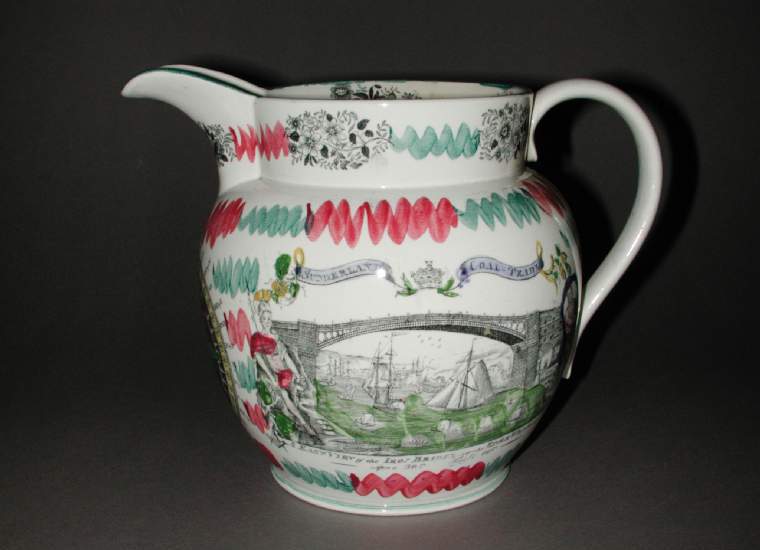 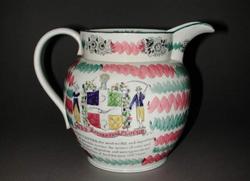 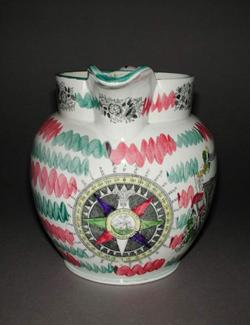 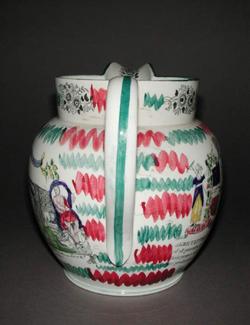 White earthenware, transfer-printed in black with text and images, and painted with pink, green, yellow and blue enamels.

Ovoid body tapering slightly to a projecting foot, with cylindrical neck, curved spout and loop handle. Decorated on the body with three transfer-prints over-painted with enamels and five unpainted floral transfers on the neck and spout and another four on the inside neck and spout. The rim, foot and handle are lined with green.and there are zig-zags of pink and green on the body and neck and in a continuous band around the shoulder. The underside is flat and glazed, with a raised foot-rim.

The images and text are as follows:
(i) On one side: The Wear Bridge, with several ships in full sail below, Neptune to the right and ?Britannia to the left. Above, a banner insctibed ‘SUNDERLAND COAL TRADE’. Below, inscription reads ‘A EAST VIEW of the IRON BRIDGE over the RIVER WEAR near SUND,, / Span 236 ft Height 100 ft.’
(ii) On the other side : A shield quartered in red, green, yellow and red with agricultural symbols; a sheaf of wheat above; a woman and a man holding farm implements to either side; and a garland of flowers around. Below: a banner inscribed ‘GOD SPEED THE PLOUGH’ above the text ‘AGRICULTURE, the most useful and importantand important/ of all pursuits, teaches the nature of soils and/ their proper adaptation and management for / the production of food for man and beast.
(iii) Under the spout: A detailed representation of a mariners’ compass, with inscription at centre ‘WEAR POTTERY SOUTHWICK’ in a yellow annulus around a sailing ship.

Given by G.H.W. Rylands in memory of his mother Betha Wolferstan Rylands.

In c.1805, Samuel Moore and Peter Austin took over the Southwick Union Pottery, close by Scott’s Southwick Pottery, and began trading as S. Moore & Co; production continued until 1882. The pink and green zig-zag decoration and edging in green on this jug is typical of Moore & Co wares, which often favoured these strong enamel colours over the pink lustre used by neighbouring potteries at the time. The use of floral transfers on inside and outside of neck was also characteristic of the nearby Scott’s Pottery.

Sunderland potteries were particularly known for their use of hand-painted transfer-prints which feature designs, verses and mottos. The designs usually have local or topical relevance and here feature the main economic interests of the region - coal mining, agriculture, shipping and river transport – along with a major landmark, the Wear Bridge, first opened in August 1796. The image shows the bridge before rebuilding in 1858-59, and has been matched to transfers dated c.1820.

Inscription present: in annulus on body