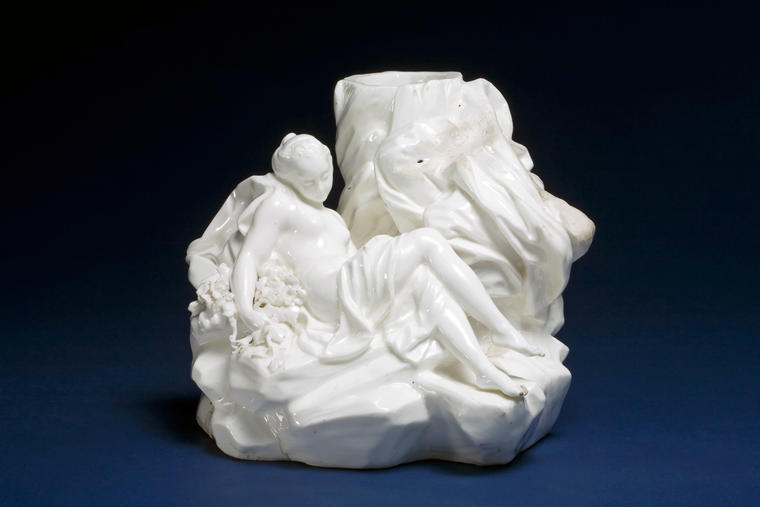 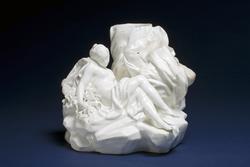 Soft-paste porcelain group of a reclining female nude, sleeping beside a tree stump, and the lower part of a draped male figure.

Soft-paste porcelain covered with a transparent glaze. On the rocky base there reclines a sleeping, draped nude female figure, her right arm resting on flowers and her right leg crossed elegantly over her left. Behing her is a hollow tree stump beside which is the lower part of a draped male figure, the upper part of which has broken away.

History note: Sold by Sotheby's, London, 14 July, 1944, Catalogue of European Ceramics. Glass and Works of Art, Antique and Decorative Furniture, Oriental Rugs and Carpets, & c., p. 5, lot 28, purchased for £30 by Frank Partridge,124-6 New Bond Streett, London from whom purchased for £31.10s. by the Friends of the Fitzwilliam Museum. See invoice dated 14th July 1944 and receipted at 26 King street, St James’s Square, in the Friends’ records for 1944.

Method of acquisition: Given (1944-07-14) by The Friends of the Fitzwilliam Museum

L’Heure du Berger was probably inspired by Pelletier’s engraving after Boucher’s Le Repos de Diane of 1722. (See Documentation, Ananoff, 1976). Its earlier identification as Daphne and Chloe arose because the figures are also reminiscent of those in Boucher’s 'Berger près d’une Bergere endormie' or 'Daphne and Chloe' ,in the Wallace Collection, London (See Documentation, Ingamells,1989), for which a drawing by Boucher was sold at the Hôtel Drouot, Ader Picard Tajan, on 18 June 1991. It was probably modelled about 1749 or 1750, and may have been intended to be mounted in bronze. Only one mounted example is known, in the Victoria and Albert Museum (see Documentation, Maxwell, 2009). 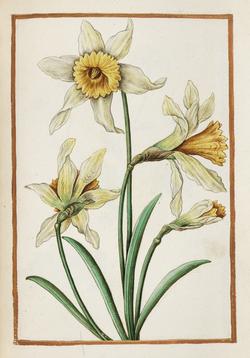 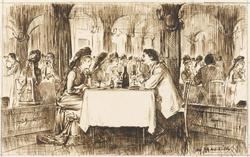 Edwin and Angelina in Paris 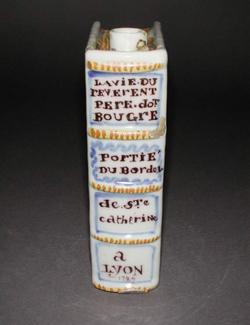 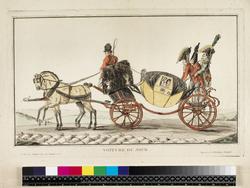