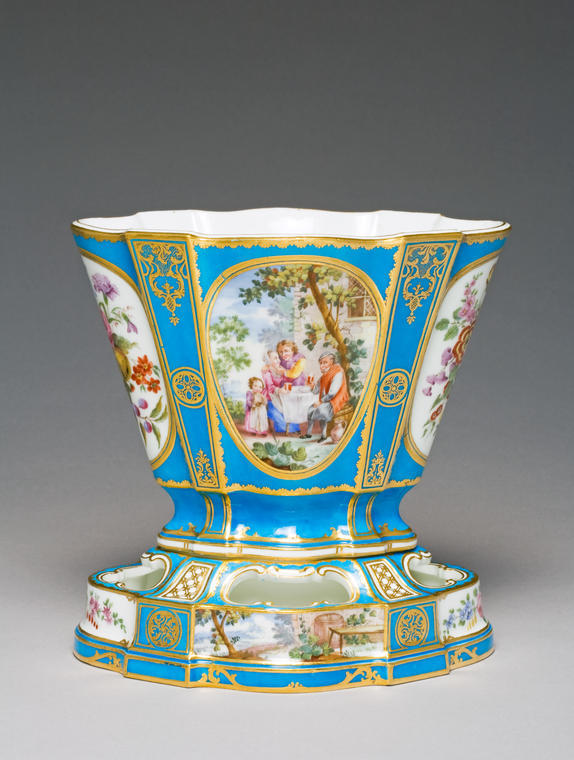 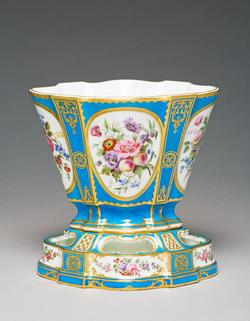 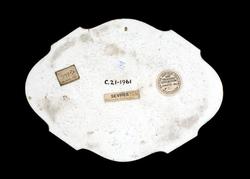 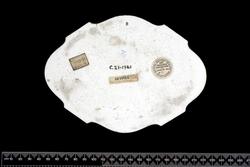 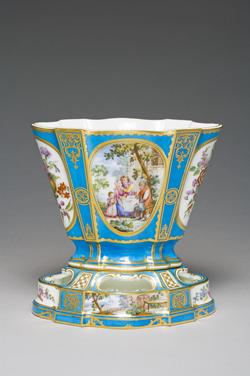 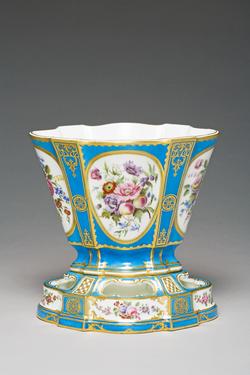 Flower vase, of soft-paste porcelain decorated with a turquoise (bleu céleste) ground, reserves painted in enamels with flowers and a genre scene after Teniers, and gilding.

Soft-paste porcelain, moulded, and decorated with a turquoise (bleu céleste) ground, painting overglaze in blue, shades of green, yellow, pink, red, mauve, brown, grey, and black enamels, and gilding. The flower vasee is in two parts, a stand for water and a plant holder. Both are of an elongated, shaped oval plan. The lower part of the holder is pierced with eight holes and fits into an aperture in the top of the stand. The sides slope upwards and outwards in the shape of a fan. The stand has a moulding round its base, almost vertical sides and shoulders pierced by four lobed panels. There is a suspension hole in the base of the stand. The bleu céleste ground of the flower holder has four narrow closed fan-shaped gilded panels between the reserves, each enclosing a central patera, and at the top and bottom a scrolled motif . There are four oval reserves on the holder and four rectangular reserves on the sides of the stand all painted in polychrome enamels. On the holder, one has a bouquet of mixed flowers, and the other two, flowers and fruit.The reserve on the front has a genre scene, including an old man, a young man and a woman, and a child around a table standing outside a cottage. The stand has four bleu céleste areas between the reserves each gilded with a diaper panel above a patera. Three reserves are decorated with floral sprays, and one with a barrel and a table standing in front of a stone wall with a landscape to the left. The openings are outlined by double gold lines.

History note: Edward Arnold Collection; sold at Christie's, 25th February 1932, Old French Furniture, Objects of Art and Porcelain being part of the collection of the late Edward Arnold Esq., lot 111; acquired by Mallett & Sons from whom purchased by Louis Colville Gray Clarke for £180 in 1932

The decoration reflects the popularity of Dutch genre paintings and prints after them in mid 18th century France. The reserve on the front of the holder is painted with an adaption of part of the engraving 'Feste de Village' by Jacques Philippe Le Bas after David Teniers the Younger (1610-90) which was advertised in the Mercure gallant in 1737 (see The Fitzwilliam Museum Print Room, Vol. II of Le Bas prints, no. 254 and 266). In the print there are six other figures round the table and the child is on the right. The same group occurs on one side of a vase hollandois , one of a pair of 1759-60, in the Jones Collection at the Victoria and Albert Museum ( 756/1,2-1882). Figures and groups from this and the print '4eme Fête Flamande' (1751) dedicated to Madame de Pompadour, were those most frequently used by Sèvres painters. The originals were then in the collection of the duc de Choiseul.

The mark is probably that of Jacques-François Micaud (1732/5-1811) but might be Philippe Xhrowet (1725-75), both of whom used a cross. See documentation (Savill, 1988, III). As Micaud was primarily a flower painter, it seems likely that the Teniers scene was executed by another painter, possibly by Vieillard, whose mark appears on the vase in the Jones Collection and on a garniture of three vases hollandois of c. 1761 likewise decorated with ‘Teniers’ scenes in the Art Institute Chicago (1994,373.1-3).

This very popular vase was known first as a 'vase à la hollandoise', and later as 'vase hollandoise' or 'hollandois'. It was probably designed by Jean-Claude Duplessis (working 1748-74), and was introduced in three sizes in 1754. a plaster model for the upper part, and a drawing of the profile dated 1754 survive in the factory's archives. This one is of the third size. They were supplied singly, in sets of three, or in mixed sets with other vase forms. The flowering plants or bulbs were grown in the top part, and could be watered through the holes in the top of the stand. A probably pair to this vase was on the market in London in 2008-2009 (see Documentation, Grosvenor House Art & Antiques Fair, 2009)

Inscription present: circular white paper label. The o of No is raised 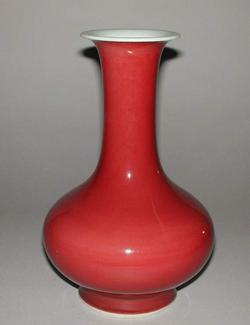 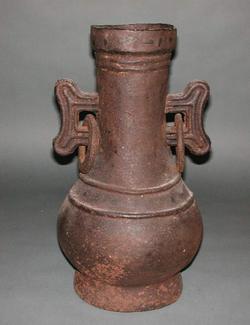 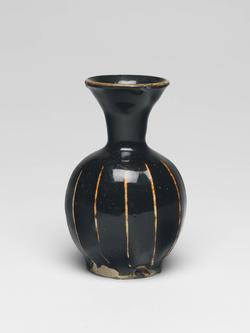 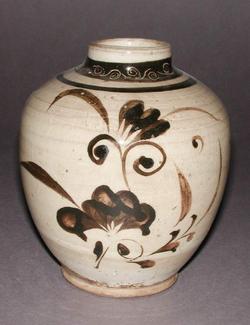