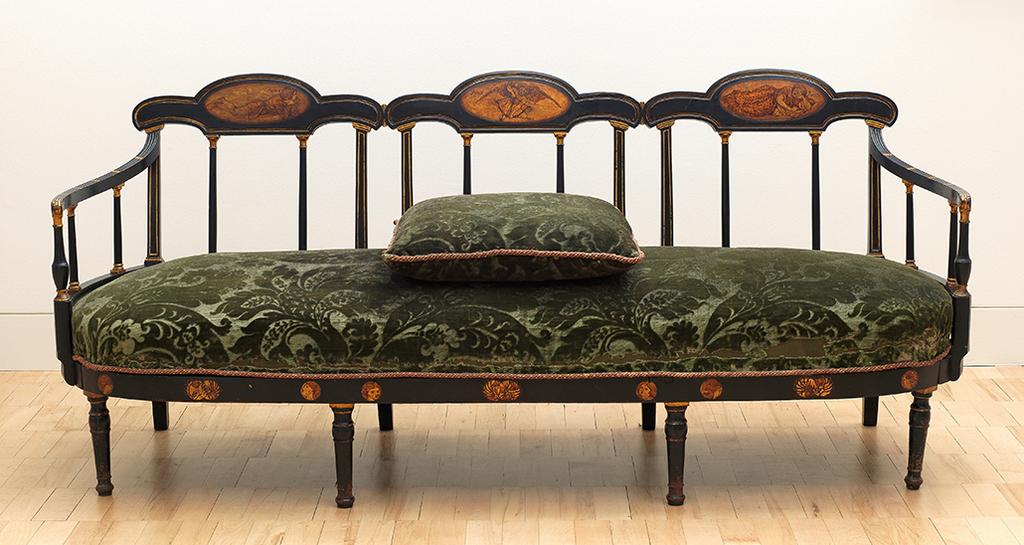 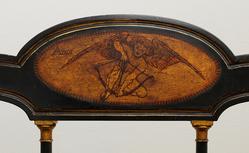 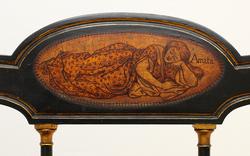 Open-back sofa of wood painted black and partially gilded, the back painted with three figures in oval medallions inscribed "Amor," "Amans," and "Amata" (Love, the Loving or Lover, the Beloved), upholstered with contemporary green cut velvet, and accompanied by a square cushion of the same fabric (A)

Given by C. Fairfax Murray

Method of acquisition: Given (1918) by Murray, Charles Fairfax

Rossetti’s career encompassed poetry, painting and design, and bridged three key artistic schools of the late 19th century: the Pre-Raphaelite Brotherhood, the Arts & Crafts Movement and Aestheticism. His later life centred on Tudor House, 16 Cheyne Walk, Chelsea, to which he moved in 1862, after the death of his wife, artist Elizabeth Siddal (1829-62). Increasingly reclusive, his earlier interest in interiors intensified and the house became a canvas for experimentation in colour, texture, and stylistic eclecticism. This Regency revival style sofa stood in his bedroom, alongside matching green velvet curtains, and a four-poster bed hung with seventeenth century crewelwork. It was described by Rossetti's assistant, painter H. Treffry Dunn, as: 'an old-fashioned sofa, with three little panels let into the back, whereon Rossetti had painted the figures of Amor, Amans, and Amata... With its rich, dark green velvet seats and luxurious pillows, this sofa looked very pretty and formed the only comfortable piece of furniture visible’. Rossetti chose to decorate this sofa with three medallions showing a love-struck young man (‘the Loving’), a figure of Cupid with his bow and arrow (‘Love’) and a sleeping young woman (‘the Beloved’), who may resemble his late wife. Although the sofa is in an 'old-fashioned' style, it is now thought to have been made for Rossetti in 1862 by decorative arts firm, Morris, Marshall, Faulkner & Company (a precursor of Morris & Company), of which Rossetti was a founding partner, in 1861. The sofa was given to the Museum by Charles Faifax Murray, an artist, collector and dealer associated with both Rossetti and Morris, who also donated Titian’s 'Tarquin and Lucretia' to the Fitzwilliam.