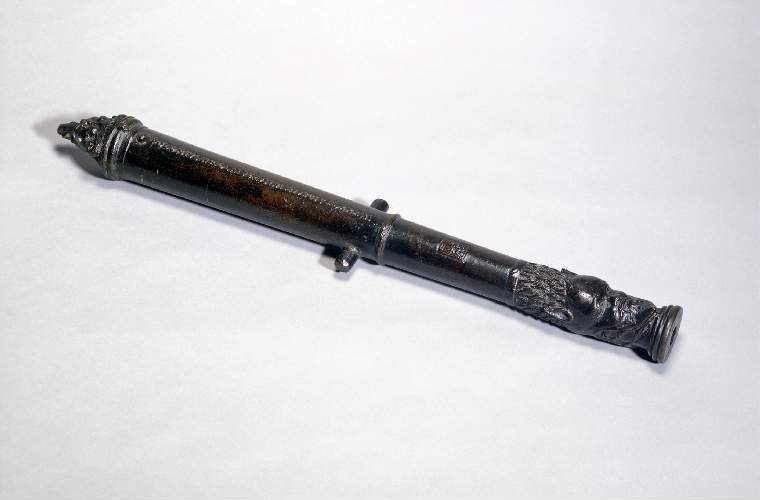 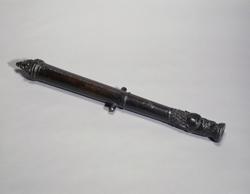 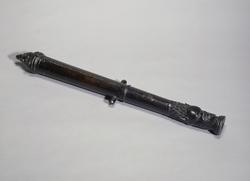 Culverin or canon, bronze, patinated dark brown, ornamented with different heads of satyrs on the cascable and chase, a relief inscription 'POLONIVS NICOLAI PERVSINI FECIT MDXXXIII', and a rectangular panel enclosing a standing warrior being crowned by Victory

Culverin or canon, Bronze, cast, chased, and patinated dark brown. Cast in three circular stages with projecting trunnions, and moulded muzzle, astragals, and sighted base-ring, decorated in high relief on the front stage of the chase, and on the prominent cascable with different bearded heads of satyrs. The satyr on the chase has upstanding hair, and an open mouth with jagged teeth. The satyr on the cascable has short scrolling horns. On the rear stage of the chase there is a rectangular panel in relief enclosing a standing warrior crowned by Victory, and on the reinforce is an inscription in relief, 'POLONIVS NICOLAI PERVSINI FECIT MDXXXIII'.

Purchased with the Boscawen Fund, and a grant from the National Art Collections Fund

It is uncertain whether the maker's name indicates Apollonio son of Niccolò (a) of Perugia, or whether Perusini was his father's second name. Perusini is a common surname in the area of Casteldurante, Marche

The muzzle of this small cannon has two 'faces' - from the side it appears to be a dragons head while from the top it is an old man. The cascable, at the very back, is a horned animal. It was probably made as a gift from one ruler, for example a prince or a king, to another but, as it completely unmarked, we will probably never know.