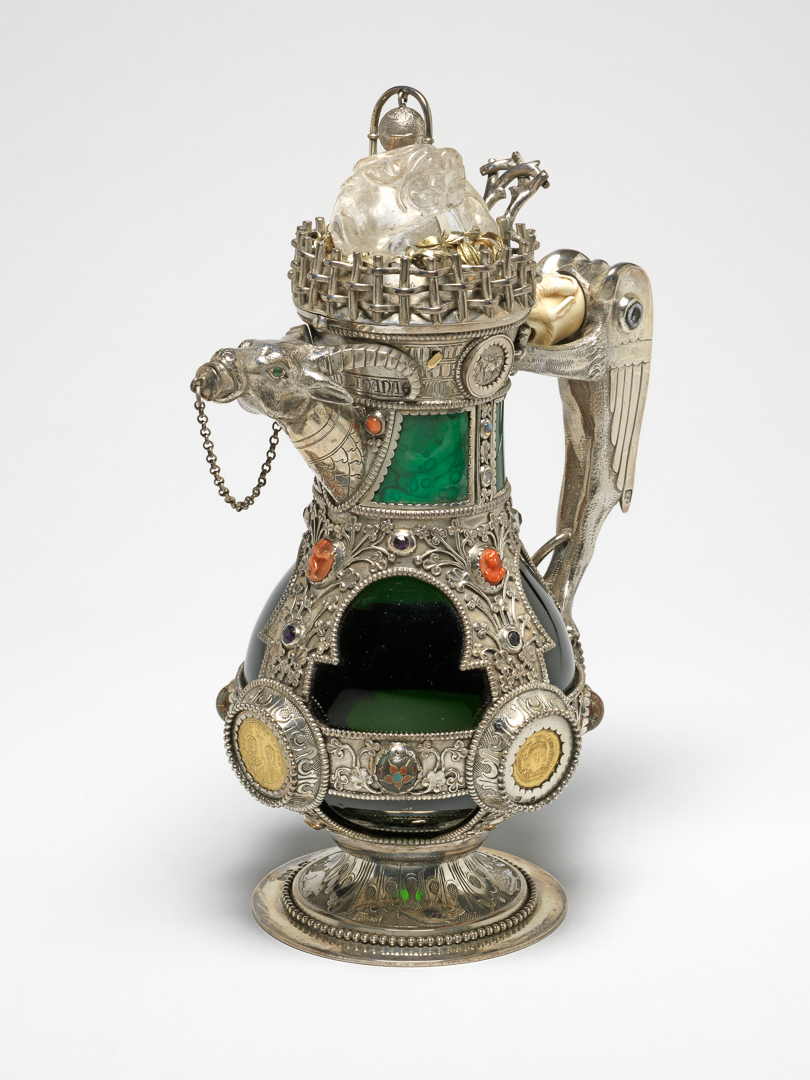 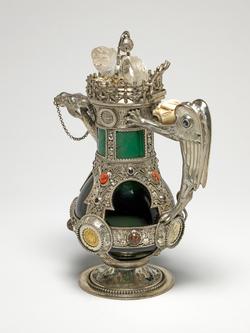 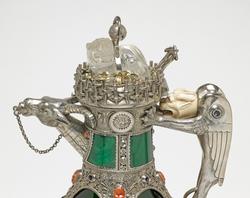 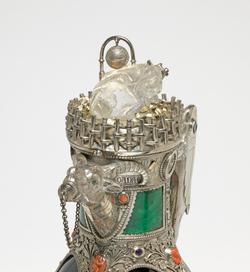 Dark green blown glass body, mounted in silver with applied and engraved ornament, set with malachite panels, semi-precious stone, cloisonné enamels, two 17th century coral cameos each of a nymph's head, one of Cupid holding a basket, and another of Cupid holding a garland, a Roman first century AD nicolo intaglio of a sleeping hound, a Sassanian 5th or 6th century cornelian intaglio of a personal device and six silver-mounted ancient coins; on the neck, a Thracian silver drachm, struck at Byzantion (c. 340-320 BC) and a Roman silver siliqua of Julian II (361-363), possibly struck at the mint in Arles, France; on the body, a Byzantine gold lightweight solidus of Justinian (527-565)m a Byzantine electrum histamenon nomisma of Nicephorus III (1078-81), a Roman silver argentus of Constntine I (307-337) issued during his time as Caesar, dating from 305-307 and struck at the mint in Trier, Germany, and a Byzantine gold histamenon nomisma of Basil II (976-1025). The hinged cover with a Chinese rock crystal Buddhist lion surrounded by leafy foliage (two pieces missing) and a silver palisade, surmounted by a hoop with silver bell, the underside of the cover with an agate, surrounded by silver foliage. The cast silver handle is in the form of a winged lion with a carved ivory head, and the spout is cast in the form of an antelope's head with emerald eye, with a silver stopper attached by a chain. The foot is engraved with a hedgehog, a frog, a mouse, and a wren with a worm in its beak, and the 'signature' 'I WREN' for Jenny Wren. The partly obscured inscription on the neck reads: WILLIELMUS BURGES ME FIERI FECIT ANNO DI MDCCLXV EX HONS ECCL[ESI]AE CONSTANTINOPOLITANAE

William Burges was one of the most talented English architects of the High Victorian Gothic Revival. His eclectic taste, love of vivid colouring, and super-abundant inventive powers brought forth a stream of idosyncratic designs for buildings and domestic objects. He took inspiration from myriad places, cultures and sources, which resulted in an eclectic and fantastical style that he applied to all of his designs. He designed this complex decanter for use in his own home, where it complemented the brightly coloured interiors and painted furniture that he had commissioned from artists such as Rossetti and Burne-Jones. This decanter demonstrates his flair for combining disparate elements to create an aesthetically satisfying whole. Burges had already conceived the design in 1858, when a similar vessel was shown with several pieces of metalwork in a watercolour serving as the frontispiece of his Orfèvrerie Domestique (RIBA Drawings collection). On the 10th, 11th and 12th sheets of this, there are further drawings for the decanter, the last of which is dated 1864. It was made in 1865 as were two variants: one made for Burges himself, now in the Cecil Higgins Art Gallery, Bedford; the other made for James Nicholson, and now in the Victoria and Albert Museum (see Documentation). The decoration of the mounts is reminiscent of early medieval crucifixes studded with re-used Roman cameos, intaglios, and uncut gemstones. The foliage applied to the body is also medieval in inspiration, as are the animals humorously engraved on the foot. The inscription indicates that Burges paid for the decanter from the fees which he had received for his prize-winning design of 1856 and later modifications to it, for the Crimea Memorial Church in Constantinople. This, like several of his architectural projects, was never built because its estimated cost proved too high. 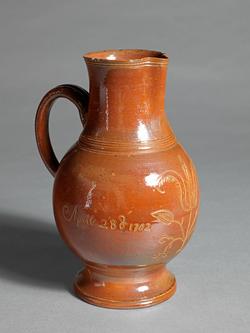 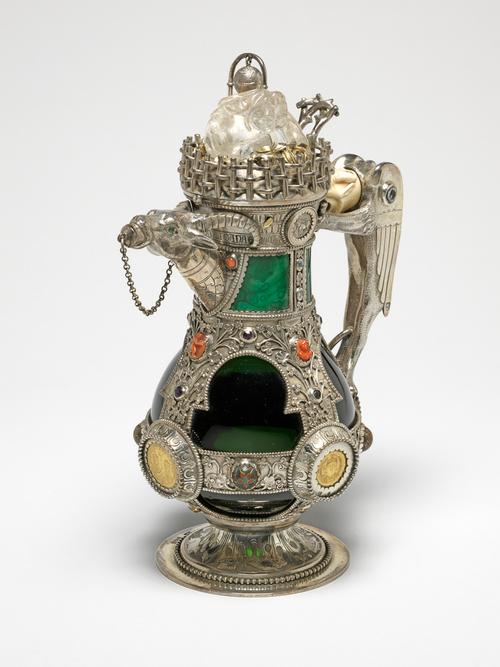