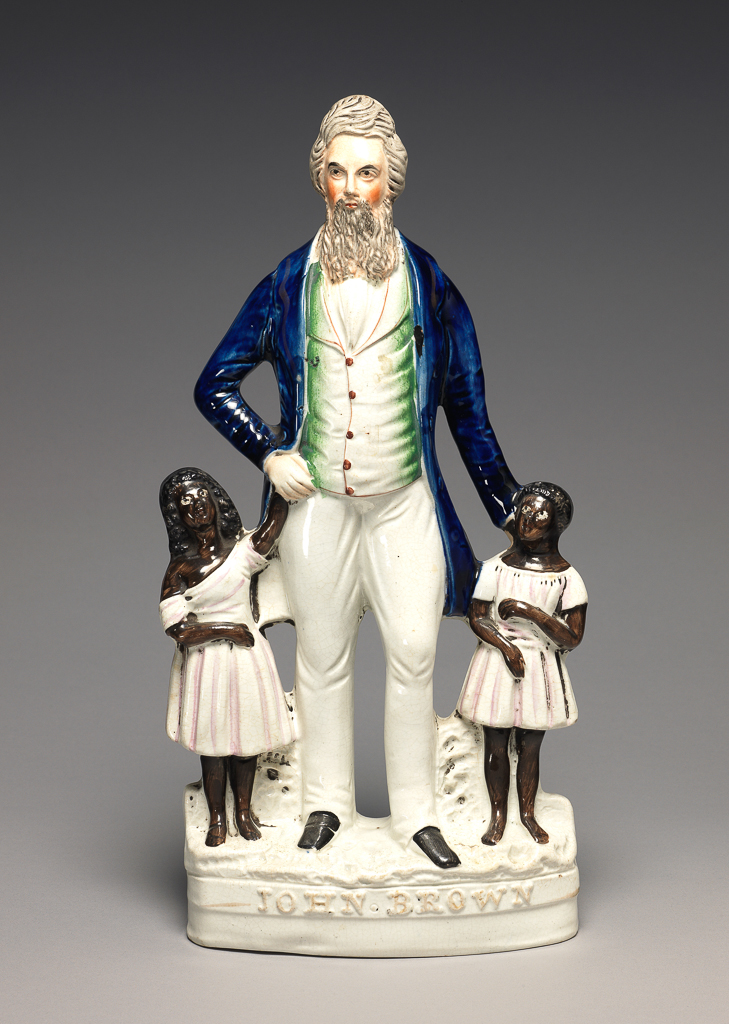 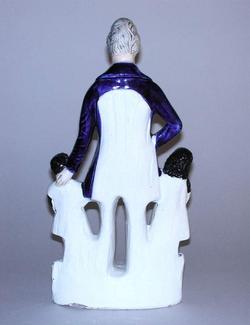 John Brown stands with two small, black children. His right hand holds the raised hand of the girl, and rests on his hip; his left rests on the boy's shoulders. John Brown wears a long blue coat jacket, white trousers, black shoes and a green-shaded waistcoat which has brown edging and buttons. His hair is grey, with a moulded combed pattern, and he wears a full beard. The children stand against rocks; they are barefoot and wear white smocks, striped with pink. Their hair is black, the girl's long and the boy's short. The oval base is inscribed 'JOHN BROWN' in raised and gilded capitals on a straight ribbon; there is a gilt line to the left of the title and a small incised 'o' between the words; the top is moulded to suggest rough ground. The underside is concave and glazed. The back is flat, with vertical scoring in the clay and painting to the heads and the shoulders of the main figure.

Although this figure celebrates the revolutionary abolitionist John Brown, the depiction of enslaved children as subservient to him is part of a problematic history of presenting people of colour as powerless.

John Brown (1880-1859) was a tanner and farmer who became a revolutionary abolitionist in the United States, campaigning through armed insurrection for the abolition of slavery. In 1859, following an unsuccessful attempt to seize the federal armoury at Harper’s Ferry, he was tried and executed for treason, murder and conspiracy by the state of Virginia. He is the John Brown of the song ‘John Brown’s Body lies a-mouldering in the grave’.

The source of this figure may have been an engraving in the popular press or a music cover. An image of John Brown at around the time of his trial shows him to have had plentiful grey hair and a full beard.

Woolliscroft (1976) lists this figure as attributed to Sampson Smith, at Longton, a factory listed in contemporary directories as a ‘manufacturer of figures in great variety’, which began around 1851 and continued to make figures in quantity into the early part of the twentieth century. Sampson Smith figures typically have a plain oval base, often with the title in raised capitals; they are made with a simple three part moulding, and sometimes the figures are supported by a low wall. So this figure group may have been made there. This concurs with Rackham’s listing (1935) of the group as of a type made chiefly by Sampson Smith.

Press-moulding : White earthenware moulded in three parts and pearlware glazed. Painted underglaze in cobalt blue and with black, brown, grey, green, red, pink and flesh-pink enamels, and gilt. The underside is concave and glazed. The back is flat, with vertical scoring in the clay and painting to the heads and the shoulders of the main figure.
Painting Lead-glazing Gilding 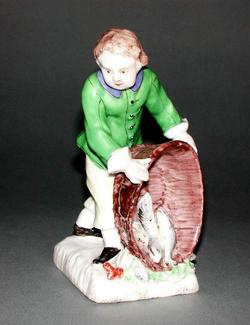 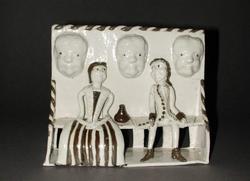 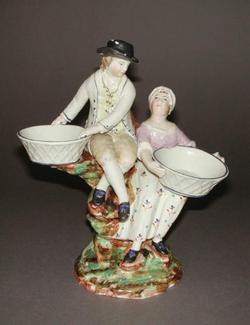 Boy and Girl with Baskets 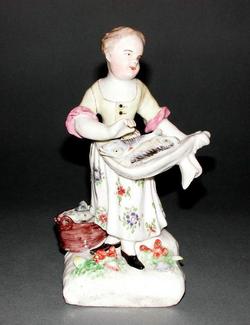 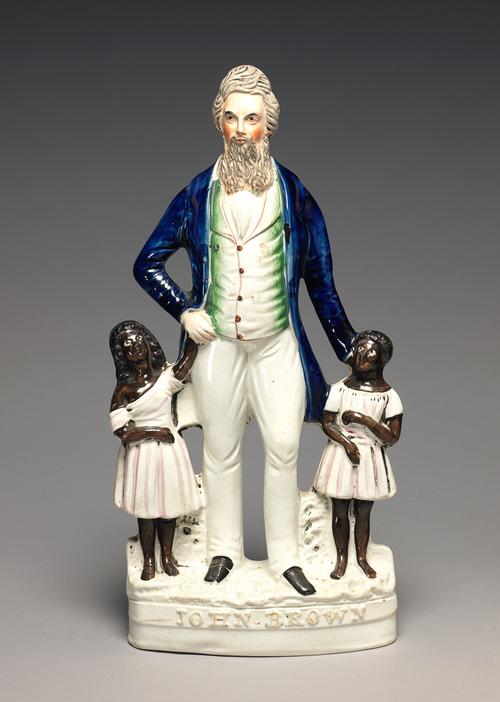