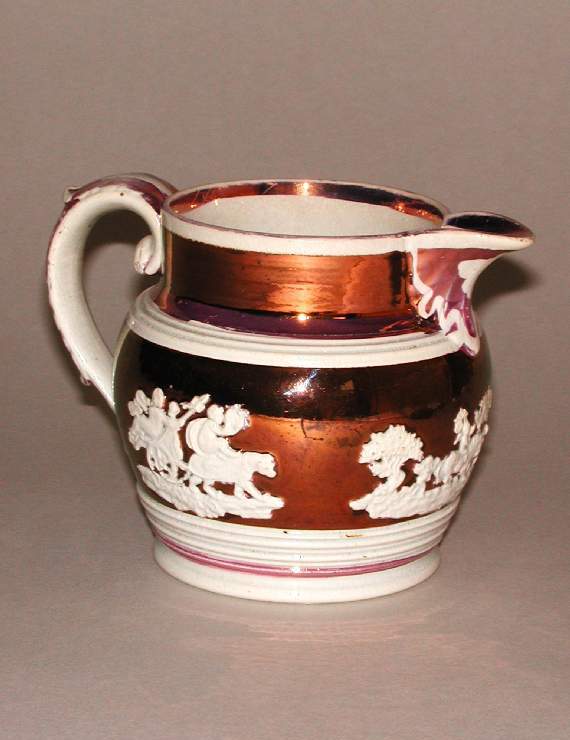 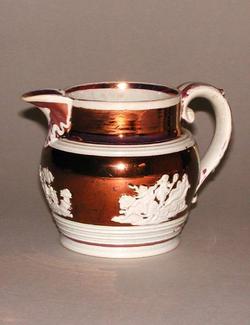 White earthenware, relief moulded and sprigged, glazed, and lustred in copper and pink.

Small bulbous jug with cylindrical neck and loop handle. On the body, three white reliefs of putti on a copper lustre ground with moulded bands in white above and below. A band of copper lustre around the neck continues, with resist decoration, under the lip and another runs around the rim. Two pink lust lines down the handle cover a stylised leaf moulding. The underside is flat and glazed, with a slight foot-rim.

,English lustreware was commercially produced from c.1805 and popular throughout the first half of the 19th Century. Staffordshire potters were the first and largest producers, though similar wares were also made in other regions and pink lustreware is often particularly associated with Sunderland. Minute amounts of gold were used to produce copper, gold, pink or purple lustre, depending on the type of clay, lustre formula, number of layers and firing temperature; platinum was used to mimic silver. Copper lustre was a popular choice for highlighting moulded wares and for broad borders covering the neck rim and handle. By c.1830 it was used to mimic the metal itself, by dipping the whole vessel into the lustre, perhaps with a relief or reserved band of decoration.

Most lustreware was made for everyday use, and this example is probably a milk jug. Factory markings are rare, but features of this jug, such as its shape, the rich copper lustre, the ridged white bands, the sprigs depicting putti and the pink lines on the handle have all been linked to wares made by John Shorthose, who traded as Shorthose & Heath until 1815 and after that as Shorthose & Co, at Shelton and Hanley, until 1823 when he was declared bankrupt (see Gibson, p.89). Similar sprigs have also been found on jugs by Enoch Wood. 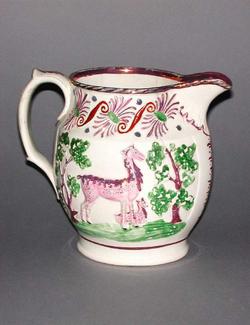 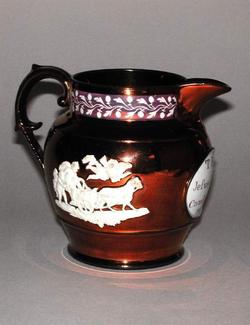 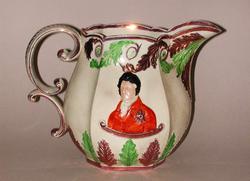 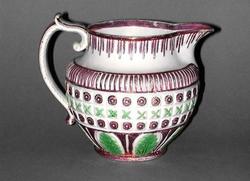